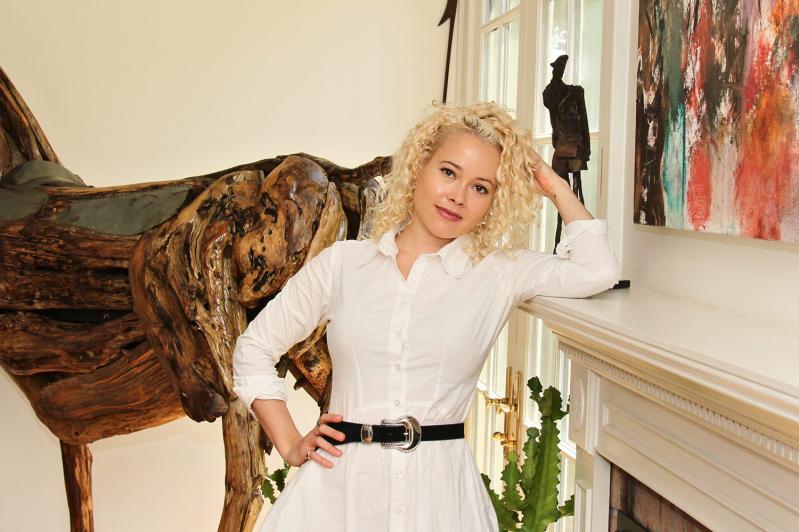 Rebecca Knox, an actress who grew up in East Hampton, returned from Los Angeles to her family’s home for the premiere of her film “Cavity” at the East Hampton TV Festival at Guild Hall.
Durell Godfrey
By Mark Segal

Growing up, Rebecca Knox never acted in school. In fact, she never raised her hand in class, because she knew she would turn bright red and feel like throwing up. “I hated an audience,” she said at her family’s house in East Hampton recently.

But she was no introvert. “When I was 16 I went to a concert of the band Beirut. I told the manager I was going to work for them, and I did, for two years. When I was 18, I was very ballsy and thought I could run my own record label.” Living in New York City at the time, she started Jet Boy Records, which took its name from a song by the punk pioneering New York Dolls.

After a year at Oberlin College in Ohio, and just before transferring to the Berklee College of Music, she had an existential crisis. “I was doing really well, I was working at the record label of my dreams, I had my own label, and Berklee was really hard to get into. But I was just not feeling it. So I decided to take an acting class, even though at the time the thought made me want to puke.”

Six years later, now 26, Ms. Knox recently wrapped the final season of “Orange Is the New Black” — her second as the inmate Tina Swope — which will premiere on Netflix on Friday, July 26. Her other acting credits include the Volker Schlöndorff film “Return to Montauk” and the CBS series “Bull,” among others.

She recently wrote, produced, and starred in “Cavity,” a short drama that will have its premiere as part of the first annual East Hampton TV Festival, which will take over Guild Hall with two days of screenings and other programs on Monday and Tuesday.

Launching “Cavity” in East Hampton is a homecoming of sorts for Ms. Knox, who moved to Los Angeles four months ago. The daughter of Bernard and Sarita Kiembock, the owners of East Hampton’s Village Hardware and the White Sands Resort Hotel on Napeague, Ms. Knox grew up in East Hampton and attended the Amagansett School and Ross School before finishing high school in New York City.

“When I told my parents I was going to study acting, they thought I was absolutely out of my mind because I had no prior experience. They were very concerned at first, but now that I’ve proven I’m very serious about my work, they’re supportive and excited.”

She studied at first at the Susan Batson Studio and then for two years at the Lee Strasberg Theatre and Film Institute, both in New York. “Return to Montauk,” which was released in 2017, was her feature film debut. “It was a tiny blip of a part, but the great thing about it was being on a big set like that and then also being able to get to know [the film’s star] Stellan Skarsgard, who is incredible.”

The experience also launched a friendship with Mr. Schlöndorff, whose 1980 film “The Tin Drum” won that year’s best foreign language Oscar. “I actually had dinner with him in Los Angeles about a month ago. He’s like my mentor. I can email him about anything, and he’s always down to reply with advice and support.”

Through her agent in New York City, she went to several auditions for “Orange Is the New Black.” “It was my third time getting called in, it was my fourth and last audition of the day, and I was fed up. I decided since the character was an inmate, I wasn’t going to put on any make up, and I wore a ratty tank top. I was so over it and went in without caring. I was not expecting to book it, but the next day they called me, and it worked out.”

The experience has been a career-changing one. “Being on a team like that with a group of actors, really feeling like I’m a part of something, I learned a lot. I’m prepared for anything now.”

For Ms. Knox, “anything” now includes writing and directing as well as acting, all the more so since completing work on “Cavity.” The 14-minute film opens in a bar, where Cleo (Ms. Knox) hooks up with Jasper (Ian Weglarz), who turns out to be a volatile and emotionally abusive character.

“I was telling a friend about this bizarre relationship I had just gotten out of with a strange guy, and she said it sounded like a movie. I had never really had the drive to write, but I sat down and in one night basically wrote out the first draft. In reality I wasn’t as empowered as I made Cleo. I think that’s what art is for.”

She brought the script to Ian Adelson, who had directed her in a short film titled “Strangers at Night,” and he signed on to direct. Several producers she knew from CBS also came on board. Another South Fork local, Forrest Gray, the son of Spalding Gray and Kathie Russo, scored the film.

“For the lead actor, I cast someone I literally met on the street at night, randomly. He had never acted before, but I thought he was the only person who can play Jasper.” They met to rehearse three times a week for three months. “Every last penny of my ‘Orange Is the New Black’ money went into the film, so I felt I couldn’t mess it up.”

Ms. Knox and Mr. Weglarz are both nominated for best leading acting awards in a short film at next week’s festival, Mr. Adelson is up for best director, and the film is one of three nominees for best short film. Now that she has written and produced a film, Ms. Knox wants not only to continue to write, but also to direct. “I want to do things like Greta Gerwig,” the actress who wrote and directed “Lady Bird.”

Whenever she can, Ms. Knox moonlights by helping promote Doña Sarita mezcal, which is imported by her parents’ company, East Hampton Importers. “It’s named after my mother,” she said. “So many alcohol companies are male-driven and being advertised for the male eye. I want to promote it in the female vein. But I need a bigger name. It’s a work in progress.”

The East Hampton TV Festival will feature 15 shows and documentary films made for television from Canada, Germany, Austria, Spain, France, and the United States. Panel discussions, which will begin Monday morning at 11, will examine topics including casting for series, television and cable vs. streaming online, diversity in television, financing, and investing in films.

Screenings will begin on Monday at 4 p.m. and continue through Tuesday evening, after which the awards will be announced. Four of the documentaries explore artists and art institutions. The work of three artists featured in those films, Marcus Jansen, Susan J. Barron, and Robert Cenedella, will be on view at Guild Hall Monday and Tuesday from 10 a.m. to 8 p.m.

The complete schedule of events can be found and tickets purchased at ehtvf.com.