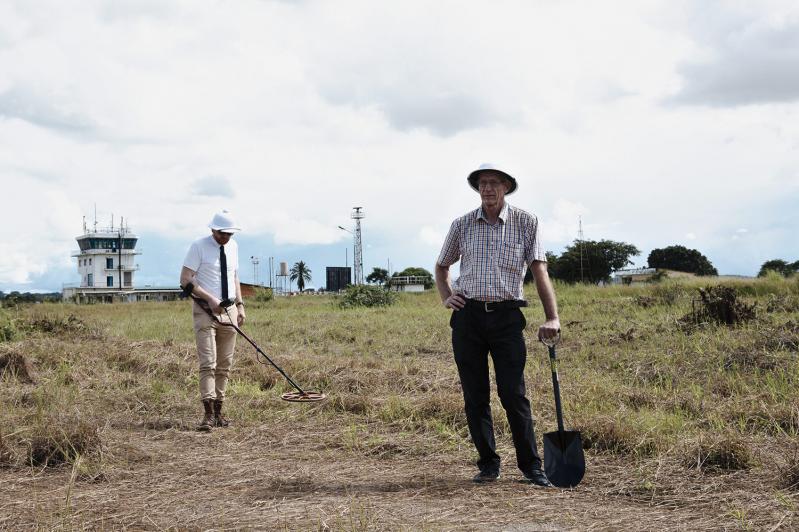 Mads Brugger, left, and Goran Bjorkdahl in the documentary “Cold Case Hammarskjold,” which will be screened on Saturday in HIFF’s SummerDocs series.
Magnolia Pictures
By Jennifer Landes

What to make of “Cold Case Hammarskjold,” Mads Brugger’s idiosyncratic odyssey into the vile heart of African colonialism and the conspiracy theories surrounding it to this day?

Fans of Werner Herzog, Spinal Tap, VICE, Documentary Now, Graham Greene, and Hunter S. Thompson will likely enjoy the film, which will be screened as part of the Hampton International Film Festival’s SummerDocs series on Saturday. The Danish director’s highly stylized investigation of what may have caused United Nations Secretary General Dag Hammarskjold’s plane to crash over Ndola in what is now Zambia (then northern Rhodesia) in 1961 is a wild ride taken through long-veiled recesses of world history.

Widely considered a provocateur, Mr. Brugger announces early on that he is dressing in the attire of the man who will become the villain of the film while renting a room in a hotel where he was known to stay. As an expository device, he speaks to a local woman he has hired as his secretary, describing the case and what they hope to find. She types his words and theories onto yellow Post-it notes they add to a wall and asks him pointed questions. At some point later he will further reveal why he is doing this, but first he has investigating to do.

Joining him on this quest to re-examine a case more than 50 years old is Goran Bjorkdahl, a Swede whose quiet steadfastness almost balances the excesses of Mr. Brugger. There’s a hint early on that the filmmaker may not be the most reliable of narrators during an exchange between Mr. Brugger and a driver who has picked them up at the beginning of their African sojourn. The driver, whose name is Mass, mistakenly believes that he has the same first name as Mr. Brugger when he first hears it. Neither Mr. Brugger nor Mr. Bjorkdahl corrects him. Rather, they play up the mistake, agreeing that they do share the same name.

It’s a small point, but it calls attention to the idea that “the truth,” in the case of the film, may take a back seat to good storytelling. At the same time, Mr. Brugger uncovers some very real activities of a shadowy militia hired by countries such as South Africa to pursue apartheid-era aims of racial cleansing. The group’s activities, recorded in documents that may or may not have been part of a disinformation campaign by the Soviets, demonstrate the racism and greed that kept mineral and ore-rich African nations in poverty and from self-determination for centuries.

After the documentary caused some sensation at its premiere at the Sundance Film Festival in January, The New York Times was compelled to do its own investigation of the film’s claims. It found a number of the findings were specious, including the most damning, and a disclaimer near the film’s end clarifies that certain things being alleged are close to impossible from a biological standpoint.

Yet the reason conspiracy theories are intractable is that they only have to sound plausible in order to be believed. In this environment, in an area rich in similar stories, it is doubtful that scientific facts will get in the way of conjecture. And just because some of the perpetrators were unsuccessful in the most evil allegations cast against them does not mean they were not guilty of trying, a fitting parallel to recent episodes in this country and in Europe involving Russian disinformation.

“Cold Case Hammarskjold” will be screened at Guild Hall at 7 p.m. A discussion with Mr. Brugger, Alec Baldwin, and David Nugent, the festival’s artistic director, will follow. Tickets are $25, or $23 for members of Guild Hall and the festival.