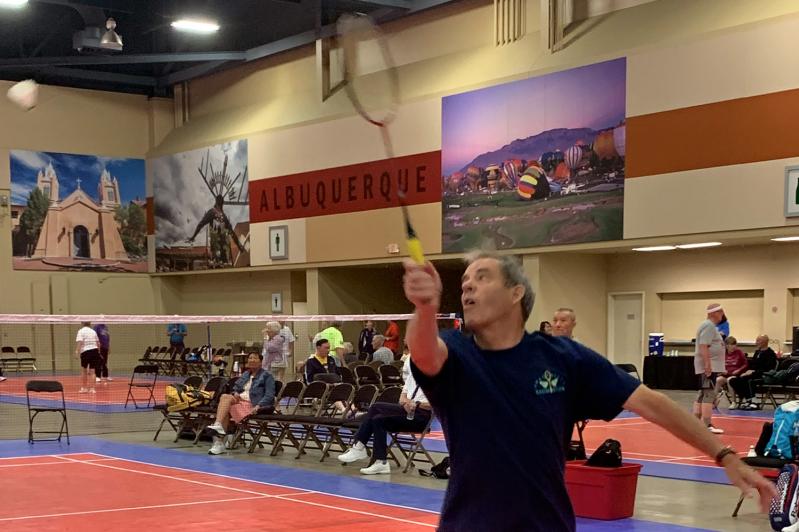 Dick Baker, in action at the national senior games’ men’s badminton tournament above, has overseen pickup games from late September through May at the Amagansett School for 38 years.
Pam Baker
By Jack Graves

Badminton, “the fastest of all racket sports,” was one of his minors, as it were, when Baker, now an associate broker with Saunders and Associates, was a college physical education major.

“I came to the Amagansett School right out of college,” he said, “and started to play a bit with Jimmy Brooks. We played in the old gym, like the one at Bridgehampton, which had a stage at one end. It had wires for lighting underneath; they caused the fire that burned the gym to the ground during the February break in 1975 or ’76. You can still smell smoke under the slate roof on a rainy day.”

“The new gym,” he continued, “was big enough for three badminton courts — you could only fit one in the old one — and you couldn’t keep the kids off them.”

He has overseen Wednesday evening pickup badminton games at the school from late September through May “for the past 38 years. . . . Chris Tracey [a former school administrator and athletic director here] used to play, Mike Ruddy, who was from Ireland and was very good, did . . . Rich Dunphy, who’s from New Zealand, and his daughter, Dani, play . . . Paul Newman, who was in his 70s then but was very good, once came out to practice with James Naughton, the stage actor, for a celebrity tournament. . . .”

In the season past “we had kind of a young group — kids, I say ‘kids,’ in their 20s and 30s, men and women — 12 to 14 regularly. We play doubles and singles, though I played more singles this year, trying to get ready for the nationals.” His wife, Pam, is a longtime badminton player too.

As for badminton vis-a-vis tennis, the interviewee said, “Once, they compared a badminton world championship match with the Wimbledon men’s final — you could look this up — and the interesting thing was they found that the tennis ball was in play 9 percent of the time while the shuttle was in play 47 or 48 percent of the time, and that the average rally in men’s tennis was fewer than four shots compared to 14 to 15 in the badminton match. And they also found that the tennis players traveled two miles each in the four hours it took them to play their match, while the badminton players, whose match lasted about an hour and 45 minutes, traveled four miles — twice the distance in half the time.”

“A lot of people think, ‘Oh, badminton,’ but what high school holds the Guinness world record for the most wins ever in a row? You should know that — they played here . . . the Miller Place badminton team.”

This had been the first senior games badminton tournament in which he’d played, Baker said in reply to a question. “You have to qualify. . . . I did that by playing in the state tournament at SUNY Cortland last summer. It takes eight hours to get to Cortland — a long ways — so I had to think about it.”

He had won the state tourney, he said when asked how he’d done, “but there wasn’t much competition. Finish in the top three in a state tournament, any state, not just New York, and you can play in the nationals automatically.”

While badminton ordinarily combines power and finesse, “at Albuquerque, which is 5,300 feet above sea level, it was more touch than power — the shuttle flies farther there — which helped me because I’ve got a cranky shoulder. . . . In tennis you run, but in badminton you sprint, two or three steps at a time. Quick forward, quick back, left, right, left, right. . . .”

“You serve underhand in badminton — it’s not the weapon it is in tennis. You can serve it deep, all the way to just inside the line. If you don’t serve it deep enough, though, the shuttle will get to you in a big, big hurry. If you serve high and short, you’re going to eat it.”

As for the 1965-66 boys basketball team, it was, said the interviewee, one of a number of championship teams the school could boast of that year and, in the case of baseball, the year before. The 1965 football team already is in the Hall.

“I was the sixth man on that team. We were the undefeated league champion, and had the best record in Suffolk County, at 19-2. We lost our first game, a nonleaguer, to Center Moriches, and then won 18 in a row. Bay Shore beat us in the county semifinal — it was an open tournament then — and we beat Pierson for third place, the second time that season that we’d beaten them. . . . It was remarkable that two little schools from the East End had got that far.”

Regarding some of his teammates: “Buddy Webb was a helluva basketball player, with a great outside shot, and he was great at driving to the basket, getting fouled, and making the shot. Gary Greene was a good outside shooter and built like a wrestler. Neither one of them was 5-10. Marvin Collins was another good guard. Ken Clark was a good all-around athlete, 6-foot-2, with a 10-to-12-foot jump shot. Ronnie Gilliam was the best, barely 6 feet. Our best rebounder. I’m sure he led the team in rebounds, a tough guy who could take it to the basket. Bob [Ockenfuss, the team’s center, living in eastern Pennsylvania now, whose research proved persuasive in making the team’s case before the Hall of Fame committee] was 6-5, tall and lanky, with a nice, soft touch. He kept the ball high after he rebounded it. . . . Jack Lilie, our coach, was just a few years older than we were. When we got off the bus and were walking down the hallway at Patchogue for one of our county tournament games, with West Islip or Central Islip, their A.D. asked us where the coach was. He was standing right next to me. We were all laughing. He had a baby face and was wearing a silly little rain hat.”

The late Steve Marley, his “favorite coach ever,” had been Lilie’s assistant, Baker said. “We were 16-0 under him as a jayvee, in my sophomore year.”

“We had a great golf team too — Kenny Clark, Bob, me, and Jimmy Salisbury, we all played golf. We were sons of South Fork members and were beating a lot of them. Kenny Clark’s father volunteered to be the coach. That’s when the team started, when I was a freshman, in ’62 or ’63. And that’s why South Fork has always been the high school team’s home course.”

Did he still play? “No . . . it takes too much time, and there are other things I like to do — fishing and other things.”