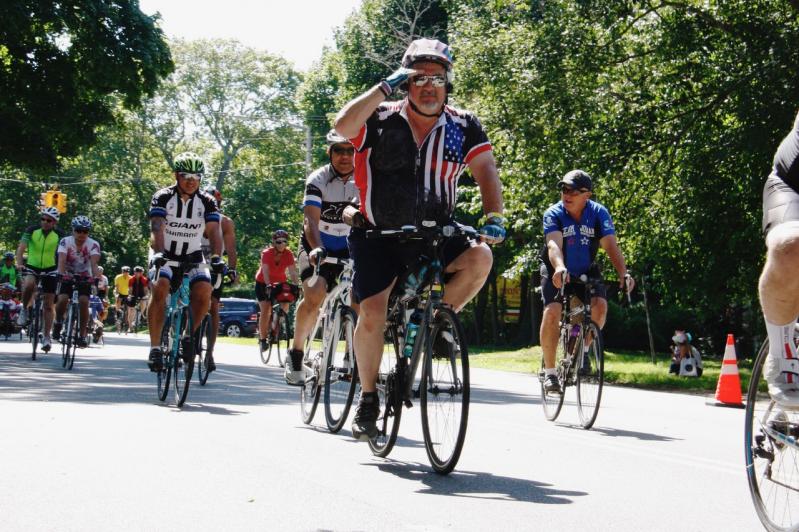 The 15th annual Soldier Ride the Hamptons will return to the South Fork on Saturday with a community bike ride to benefit the Wounded Warrior Project. The event kicks off with registration at 7 a.m. at Amagansett Farm on 551 Montauk Highway, and will end with a picnic back at the farm where riders can enjoy music, food, and more.

Riders will bike alongside wounded veterans on a 25.6-mile route that starts and finishes at Amagansett Farm and passed through Amagansett and East Hampton Village on the way to Sag Harbor. Wounded veterans will lead the first 12 miles, then rest at Marine Park in Sag Harbor. For those who prefer to travel by foot, a 5K Lap of Heroes community walk will begin at 11 a.m. at Marine Park in Sag Harbor to support soldiers injured in the line of duty

"So much of the rehabilitative aspect of the ride is receiving the support from the community, even if it's just coming down to say hello," said Chris Carney, a founder of Soldier Ride. He encouraged people to drop by the Clubhouse in East Hampton tomorrow around 5:30 p.m. for a dinner for the 50 American and 12 British soldiers arriving from Manhattan that evening.

An East Hampton native and co-owner of Railroad Avenue Fitness, Mr. Carney founded Soldier Rode in 2004 when he rode his bicycle from Montauk to San Diego to raise awareness of the issues faced by soldiers wounded in combat. Soldier Ride has since raised millions of dollars, and Mr. Carney has been recognized at the White House by presidents Bush, Obama, and Trump.

After the Sag Harbor Lap of Heroes, riders will head back to Amagansett, with a rest stop at Riverhead Lumber on Route 114 in East Hampton.

The East Hampton Town Police Department expects some 100 cyclists to participate in Saturday's ride. Although no roads will be closed, police have warned drivers to expect "significant delays." The ride begins on Montauk Highway and will go down East Hampton Main Street, Newtown Lane, Long Lane, Stephen Hand's Path, and Route 114 on its way to Sag Harbor. The return route has riders crossing Route 27 at the intersection of Buell Lane/Route 114 and East Hampton Main Street, and heading down Dunemere Lane, Further Lane, Indian Wells Highway, and Bluff Road before finishing at Amagansett Farm.

Registration costs $50 for adults, $25 for children 12 and under and can be done online at woundedwarriorproject.org, or the morning of the ride, when cash, check, or credit cards will be accepted.

Registration and packet-pickup will take place from 7 to 8:30 a.m. at the farm, followed by an opening ceremony at 8:30 before the ride begins at 9. The post-ride community picnic will be at noon. Shuttles will be available to take riders who need it back to the farm at the end of the ride.

Even those not riding can still join those riding in the event for the picnic at the farm by purchasing a $10 wristband at the registration tents before the ride starts.

Active-duty military and their family members, students, or those interested in starting or joining a team will receive a promotional code for discounted registration when they email [email protected]. Registration fees include a Soldier Ride T-shirt, event day festivities, and lunch.