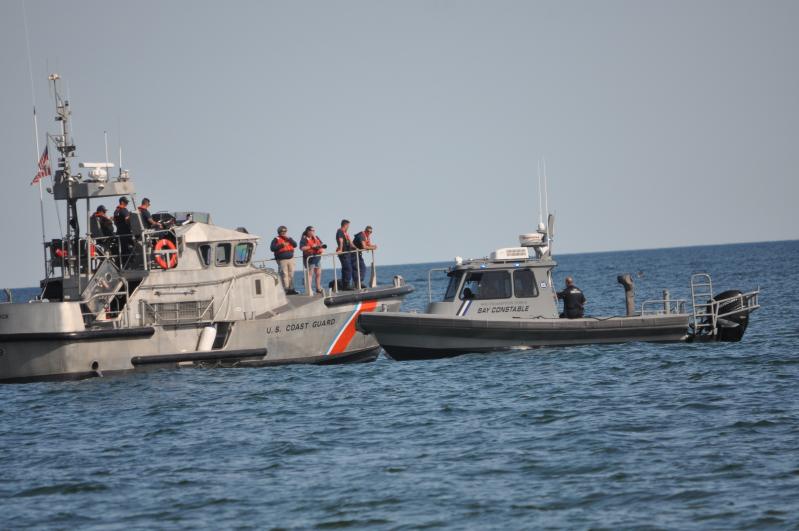 The Coast Guard and the Southampton Town Bay Constable were among the first agencies on the scene of a whale entanglement.
Jamie Bufalino Photo
By Taylor K. Vecsey

Update, 6:05 p.m.: A whale that was entangled in fishing net in the waters off Town Line Beach in Sagaponack has freed itself, Southampton Town police said Monday evening.

From the town bay constable boat, police used drone technology to monitor and record the whale's activity after receiving a call about an entangled whale around 1:15 p.m. It was about a quarter of a mile southwest of the beach. Bay constables protected the whale while working with the Atlantic Marine Conservation Society, the New York State Department of Environmental Conservation, and federal authorities, town police said in a statement.

"A recent inspection of the fishing net revealed the whale apparently freed itself," police said.

The marine conservation society said later that as of 5:30 p.m. the whale was not sighted in the area. "If the whale did free itself, there is a possibility it still may be entangled in some gear," said Rachel Bosworth, a spokeswoman.

"We will continue to monitor the area and encourage the public to report any new sightings of this whale immediately by calling the New York State stranding hotline at 631-369-9829," police said.

Originally: After a week or so of whale sighting off the South Fork's ocean beaches, one humpback whale is said to be entangled 75 feet off Town Line Beach in Sagaponack.

The Atlantic Marine Conservation Society, which received a report about the entangled whale on Monday, is assessing the situation. The conservation society is working with the National Oceanic and Atmospheric Administration Fisheries, the New York State Department of Environmental Conservation, the Center for Coastal Studies, and Southampton Town officials to formulate a plan that will involve "highly trained responders and specialized safety equipment."

It was not immediately known what exactly the whale was entangled in, though it is believed to be some type of fishing net.

"As this is a live animal, every necessary precaution to ensure the safety of responders and public must be taken," the conservation society said in a press release Monday afternoon. "Disentanglement procedures are extremely dangerous."

The conservation society urged the public — including swimmers, surfers, and boaters –  to stay at least 150 feet away from the entangled whale, not only for safety, but also to avoid further stressing the whale. Whales are protected by the Marine Mammal Protection Act, and it is illegal to approach them, the society said.

"​Whales in distress can also be dangerous, as they are unpredictable and very powerful. People have been seriously injured or killed trying to help, which is another reason we ask that people wait for trained responders."

Beachgoers have been reporting sightings of whales feeding on bunker, or menhaden, offshore from Montauk to Bridgehampton for at least week.