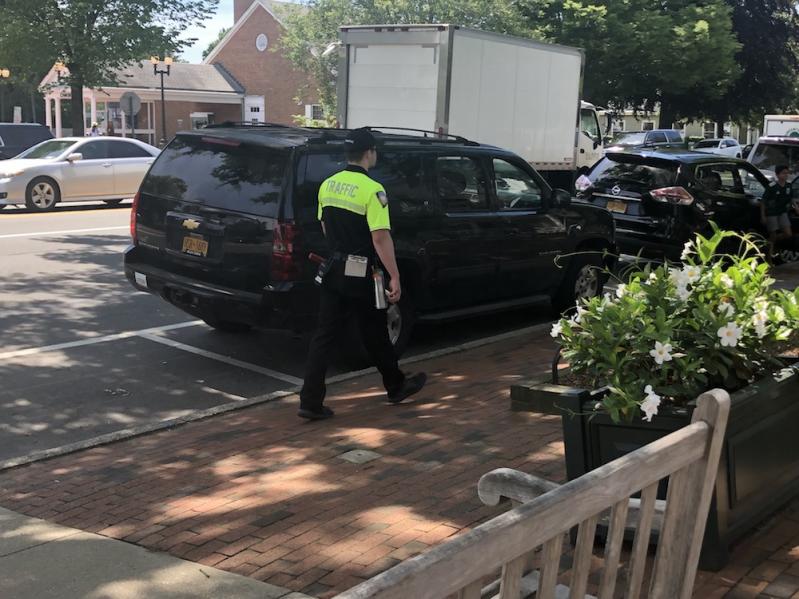 Chalking tires to know when a vehicle has overstayed its allotted time in a parking spot is a legal and ongoing method of local law enforcement, East Hampton Village Chief of Police Michael Tracey said last Thursday.

Confusion about whether municipalities can lawfully mark tires has been widespread since April, when a federal appeals court ruled that Alison Taylor of Saginaw, Mich., who had received 15 parking tickets there after having had her tires chalked‚ could sue the city for violating her Fourth Amendment right to be free from unreasonable searches.

A lawyer for the city had argued that chalking was a reasonable part of its “community caretaker” function to ensure efficient, orderly parking.

The U.S. Court of Appeals for the Sixth Circuit, which is based in Cincinnati, disagreed. In its written opinion, it said that by chalking Ms. Taylor’s tires, Saginaw had trespassed on a legally parked vehicle without a warrant, without probable cause or suspicion of wrongdoing, and without a reasonable rationale for doing so.

‘“The Sixth Circuit has no bearing in New York,” said Chief Tracey. “If the Second Circuit gets a case like that, they’ll have a chance to weigh in, but we’re not sitting on the edge of our seats waiting for a new court decision.” Village traffic control officers, he said, will continue to chalk tires.

Jay Goldberg, a New York lawyer with a house in Bridgehampton, recently discovered that firsthand when he received a ticket for exceeding the three-hour time limit in a spot for handicapped drivers in front of the movie theater in East Hampton Village.

Citing Ms. Taylor’s victory, Mr. Goldberg plans to fight the ticket in court, he said. He agreed the Sixth Circuit does not have a direct bearing on New York State law, he said, but “judges will take into account the opinions of a court of appeals. You can’t simply say it happened in Cincinnati so it doesn’t apply here, it doesn’t work that way.”

But Brian Lester, an attorney for East Hampton Village, said the Sixth Circuit’s ruling would not help Mr. Goldberg.

“I don’t know what he thinks the precedent value of that decision is,” he said. “There’s been no ruling that chalking violates the Fourth Amendment.”

The appeals court’s decision in Ms. Taylor’s case, said Mr. Lester, was far narrower than had been reported in national news stories. In response to reports such as the one in USA Today stating, “That bit of chalk left on your car’s tire by a parking officer is unconstitutional,” he noted that the court had issued an amended decision to clarify its ruling.

Saginaw had not yet demonstrated that the public benefit derived from chalking was sufficient to justify a warrantless search, the court said, but added, “Our holding extends no further than this.” The city, it said, is free to “argue anew” that chalking does not violate constitutional rights.

The bottom line, said the Sixth Circuit, is that its ruling in Ms. Taylor’s case “does not mean that chalking violates the Fourth Amendment.”