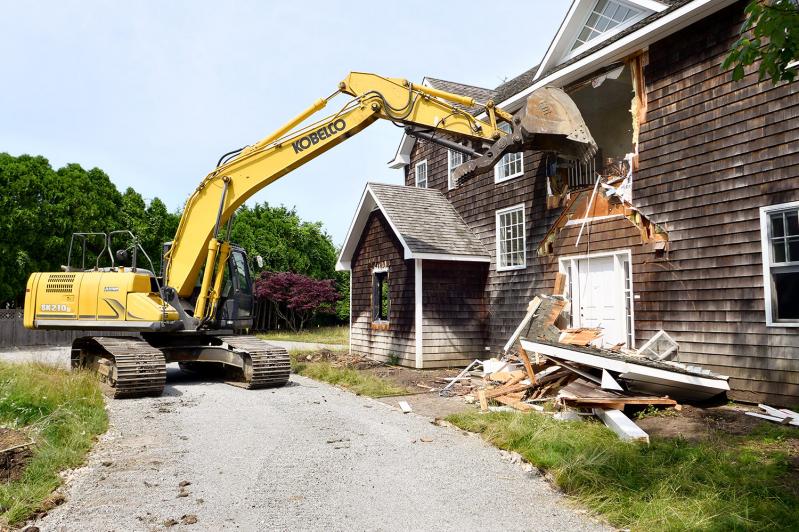 A house on the property next to the Main Beach parking lot was razed this week to make way for a preserved scenic vista.
Jamie Bufalino
By Jamie Bufalino

The structures at 81 Ocean Avenue in East Hampton Village, a one-acre parcel bordering Hook Pond and the Main Beach parking lot, are being demolished and removed this week prior to East Hampton Town purchasing the property for $4.8 million.

The property, which contains an approximately 3,200-square-foot residence, a garage, and a waterside patio, is owned by the Ayer family. It was once part of a compound that included an adjacent one-acre lot with a cottage at 10 Lockwood Lane. Both properties were originally put up for sale in 2014 with an asking price of $26.5 million.

Frederick Ayer III, whose mother purchased the parcels in the late 1960s, told The Wall Street Journal in 2014 that the family had decided to put them on the market because it no longer had the need for such a large East Hampton home.

The Lockwood Lane cottage was sold separately in 2016, but the main residence lingered on the market until earlier this year, when the village asked the town to buy it, using money from the community preservation fund. “There was an offer and acceptance in January,” said James Keogh, one of the Douglas Elliman agents representing the family trust.

The town board, at a meeting on Jan. 17, held a public hearing on a resolution to purchase the property, with the conditions that the owner would pay to remove the structures and restore the site to its natural state.

Village Mayor Paul F. Rickenbach Jr. attended the hearing and noted that the property offers a scenic view of the pond. “The elimination of improved structures will be beneficial to efforts to monitor and improve water quality in the pond,” the mayor said. “The creation of open green space will be preserved for all future generations to enjoy.”

However, David Buda, a Springs resident, called the deal a waste of C.P.F. money. “When did it become appropriate to spend millions of dollars to tear down a beautiful structure that has existing buffers between it and the pond?” he asked. “I don’t approve of spending C.P.F. funds on valuable, well-maintained structures.”

The board passed the resolution in a unanimous vote later in the meeting.

On Monday, the demolition of the structures began. Steven Mezynieski, the owner of the excavation company doing the work, said the lot should be cleared by the end of the week. In addition to razing the buildings, he is removing drainage and sewage systems and grading the land. He has installed erosion-control fabric along the pondfront to protect it during the demolition, he said.The existing vegetation will remain. Once the demolition is done, the process of restoring the space to its natural state will begin, said Becky Molinaro Hansen, the village administrator.

“The town purchased the property, but the village will maintain it,” said Ms. Hansen on Monday. It will become a preserved scenic vista, and a natural habitat that might be used for educational purposes, she said, but it will not be developed as a recreational space.