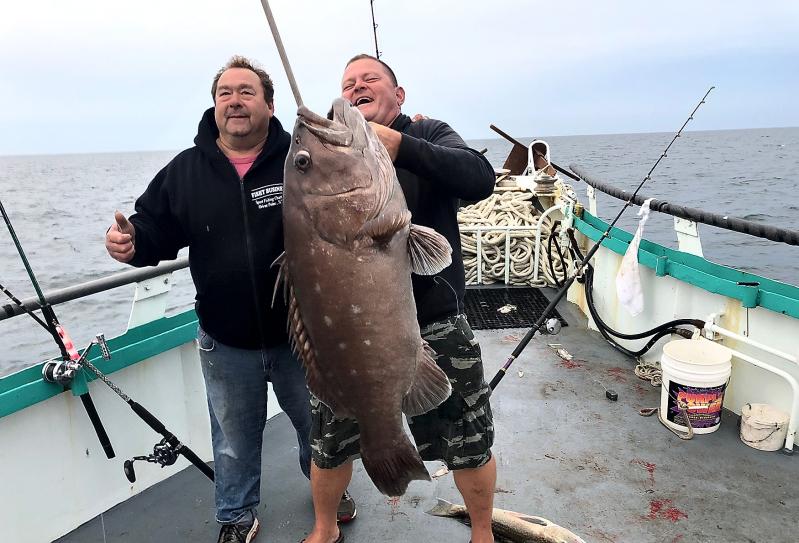 Where have they been? It’s been an unusual season for the normally reliable bluefish this year. Catches were scarce in many locales the past two months, and the fish only showed up a week or so ago in Noyac Bay. Usually they could be found as early as the first week of May in this area. Not this year. Very strange indeed.

As such, due to their scarcity, those who commercially target the oily-fleshed fish have been rewarded with prices that were well above $1 per pound, much higher than normal. Good news for the hook-and-line crowd.

However, how long the price will remain elevated is a basic Keynesian economics theory of supply and demand. The noted British economist John Maynard Keynes probably never saw or caught a bluefish, but his basic theorem still holds plenty of water, so to speak. Keynes was no dummy.

The balance of supply seems to be tilting, as the toothy predator has now appeared in abundance here, and in a variety of sizes. Thankfully, just in time for the July 4 holiday. Another great reason to celebrate. Let the fireworks fly.

“They are literally just about everywhere,” smiled Paul Apostolides from behind the counter of Paulie’s Tackle Shop in downtown Montauk. “They’re on the south side all the way around to the north. And the sizes are mixed from small cocktails to jumbos over 15 pounds. It depends on the school that comes through.”

Much like the silver-slabbed porgy, bluefish sometimes receive a bum rap, for no apparent reason. Because they possess a very soft, darkish flesh, it is imperative to immediately bleed and ice down any fish that are retained for the dinner table. Rich in omega-3 oils, which make them a big hit with nutritionists, bluefish are delicious when prepared in a number of ways.

One of my fishing partners has perfected the art of smoking bluefish under fruitwood and the end result is simply sublime. Whether just picked off the skin as a starter served at cocktail hour or mixed in to a simple pâté, the oil-laden flesh lends itself well to hot wood embers. Its intense richness has very few peers. Smoked blue on that Sunday morning bagel? Try it.

Henry Uihlein of Uihlein’s Marina on West Lake Drive in Montauk agreed that there were lots of blues around, “But the striped bass fishing has been great too, as have porgies, sea bass, and fluke. Just in time for July 4th.”

On a side note, it’s not too late to enter Uihlein’s Montauk Mercury Grand Slam charity tournament, in conjunction with the Kiwanis Club of East Hampton and the Montauk Friends of Erin. The event is set for July 13 and 14, and proceeds benefit the club’s programs for youth, families, and senior citizens in the East Hampton community. The Montauk legend Vinnie Grimes, who is 90, will also be honored during the event as the Fishing Legend of the Year. A well-deserved honor.

“Fluke fishing is picking up,” said Capt. Michael Vegessi of the Lazy Bones in Montauk. “The fish are now all spread out in their usual summertime haunts.” Fish over double digits in weight have been landed of late, including a fat 12-pounder by Angelo Racanelli.

Farther offshore, sharks, including makos, threshers, and blues, continue to be found in ample quantities. Bluefin tuna are also on the feed, while their cousins, yellowfin tuna, have begun to show up in the catch.

Not to be outdone, Capt. Steven Forsberg Sr. of the Viking Starship recently took his 140-foot boat to some very distant grounds to the east for an extended four-day charter. The action and variety for the denizens of the deep were excellent.

“After a long steam on day one, we had great conditions and fishing was good from the first drop of the morning,” he said, and the catch included tilefish, hake, pollack, cusk, barrelfish, and the first wreckfish of the season. The next day brought several large snowy grouper to nearly 60 pounds to the gaff. Wrapping up the trip was an excursion to the offshore fluke grounds east of Nantucket, where fluke up to 12 pounds were netted, including quite a few over 10 pounds.

“All in all, it was a truly great trip,” summarized Forsberg, before readying his steel-hulled craft for its next offshore adventure.

Over at the Tackle Shop in Amagansett, the owner, Harvey Bennett, was glued to the tube so to speak, watching his beloved New York Yankees play the Boston Red Sox in jolly old London last weekend. “It was fun to see those games played over there and how many people showed up to watch it,” he remarked.

Turning to the fishing scene, Bennett said, “Man, there seems to be fish just about everywhere; it’s hard to keep track of some days.”

“Blues and bass have been great at Maidstone, Amagansett, Napeague, and Hither Hills on tins and bucktails. Lots of keeper bass too. It’s like fishing in the fall used to be.”

Bennett also added that bottlefish, also known as blowfish, have been thick in the bays, and that porgy fishing is “off the charts.” Looking for sea bass and fluke? Bennett suggests trying east of Gardiner’s Island and the Ruins. Don’t have a boat? The dock in Fort Pond Bay has small sea bass, squid, and porgy on the daily menu.

“And I’ve heard that brown sharks are coming close again to Montauk Lighthouse,” he added. Last year witnessed a number of the predators landed and released at the Point and south-facing beaches.

“I’m stocked and ready,” said Sebastian Gorgone of Mrs. Sam’s Bait and Tackle in East Hampton, speaking of the upcoming holiday and meeting the needs of his customers. Gorgone said that blowfish are still running in Three Mile Harbor and that porgies and sea bass are in steady supply. “And bass and blues have been really good of late from the ocean beaches,” he added. “Plus, hickory shad are still around.”

Sounds like a lot of fireworks on the fishing scene. Happy holiday.

We welcome your fishing tips, observations, and photographs at [email protected]. You can find the