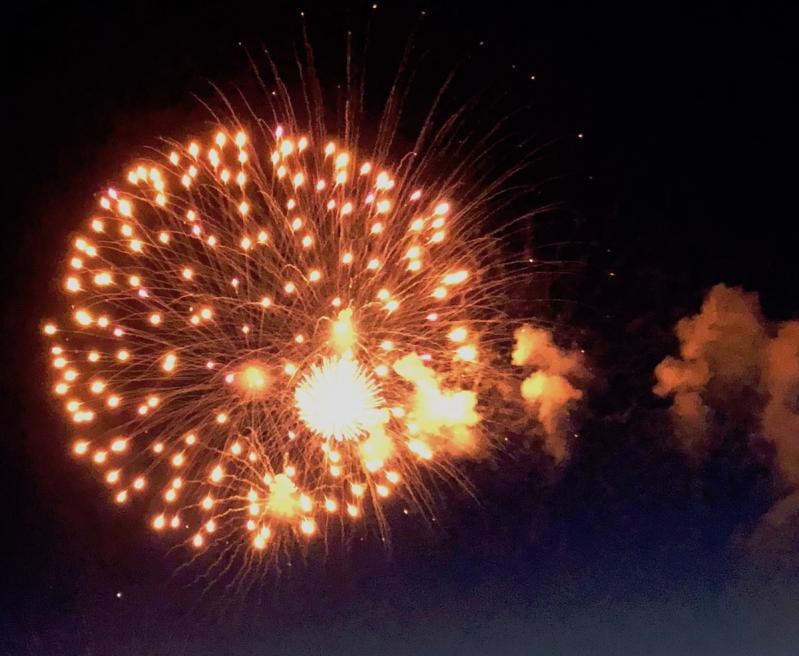 Fireworks season on the South Fork will be in full swing starting on Wednesday, and displays will continue to light up the skies this summer. Here are the dates to keep an eye out for in the coming weeks:

A firework display happens the night before the Fourth of July at 10 at the North Sea Fire Department Carnival, which takes place 149 Noyac Road, Southampton. The carnival will be open from 7 to 11 p.m. from Tuesday through Saturday.

The Stars Over Montauk pyrotechnics show by Fireworks by Grucci will be launched from Montauk's Umbrella Beach at 9 on Thursday (rain date Friday, same time). Anywhere close to Umbrella Beach will make for a good viewing spot. The Montauk Chamber of Commerce offers the option of experiencing the show from the Viking Starship as part of a fireworks cruise from 7 to 11 for $100. It includes a buffet dinner and entertainment. Fund-raiser attendees must be 21 or older.

Fireworks are scheduled to start at sunset at the Westhampton Country Club on 35 Potunk Lane in Westhampton Beach. Member or not, you can still catch the spectacle on the village's Great Lawn. The rain date is July 5.

The Southampton Fresh Air Home will put on a firework display over Shinnecock Bay as part of its annual American Picnic benefit on at 1030 Meadow Lane. Starting at 7, there will be a carnival with games, food, music, dancing, and fireworks to support the Fresh Air Home, a summer camp for physically impaired children. Tickets start at $300, $200 for those  21 to 25, and $100 for children. They can be purchased at sfah.org. Those without tickets can see the show from nearby spots along Meadow Lane.

The North Sea Fire Department will host a final firework display at 10 on the last night of the carnival.

The Sag Harbor Yacht Club will host the John A. Ward Independence Day fireworks show  at 9:30. Recommended viewing spots are Havens Beach, the Long Wharf, and Marine Park, and they can be seen in a distance from spots along Northwest Harbor.

The Devon Yacht Club in Amagansett will present its annual fireworks show at 9:15, from just off of his club property at 300 Abrahams Landing Road. The show becomes a community event as people head to Gardiner's Bay beaches from Barnes Landing all the way to Promised Land on Napeague. The rain date will be Sunday.

Carrying on a three-decade tradition, albeit with a new name, the Great Bonac Fireworks Show will light up Three Mile Harbor at 9. Recommended viewing spots include Maidstone Park, Sammy's Beach, Gann Road, or beaches on the west side of the harbor. Boaters head into the harbor early for a good viewing spot.

The Shelter Island Chamber of Commerce will kick off its 60th annual fireworks at Crescent Beach around 9. Viewers can find parking at Goat Hill.

The East Hampton Fire Department will present its annual fireworks display a little earlier than usual this year. "We decided to move it back to the 17th this year," the East Hampton Fire Chief Gerry Turza Jr. said. "Hopefully more people will still be here to enjoy the show." The display starts at sunset. In case of rain,  the show will be on Aug. 18.

Mashashimuet Park's History and Future
A Conference for Young People to Create Solutions
Get Outside, Get Moving
END_OF_DOCUMENT_TOKEN_TO_BE_REPLACED