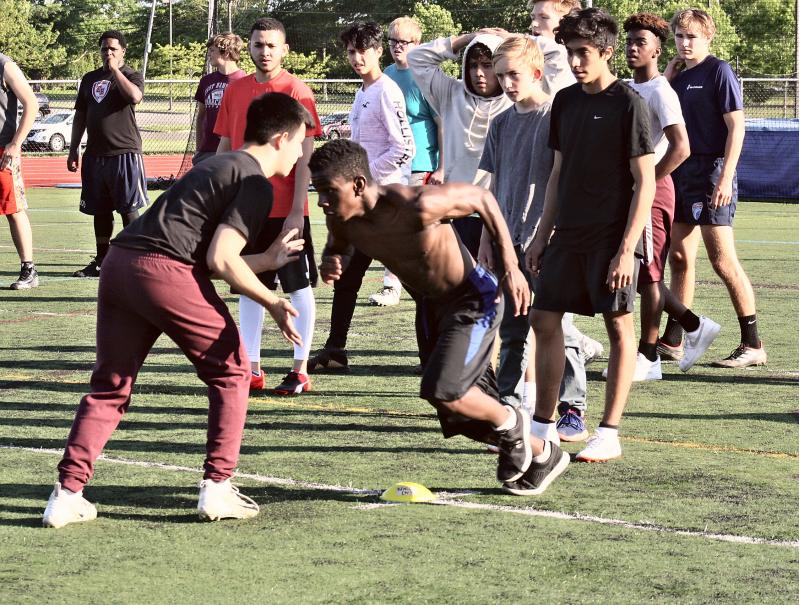 On second thought, East Hampton High School is going to go with a junior varsity football team only in the fall, Joe McKee, the varsity’s head coach, announced Monday.

“At the end of the day, we would only have had five seniors and 15 juniors — we’d rather keep sophomores on the jayvee — so it would have been an uphill battle again at the varsity level,” McKee said. “This way, we’ll have almost 40 on the jayvee, which is a great number, and we should be good because we’ve got a lot of talent. If we have some success, then we’ll field a varsity in 2020.”

For the past five years, McKee has been trying mightily to rebuild the program, which in the past half-dozen years has struggled numbers-wise. East Hampton had no team in 2014, only the fourth time that had happened since football began being played here in 1923. There were varsity teams in 2015 and 2016, no team again in 2017, and a jayvee only last fall.

This past winter there was an effort to combine at the varsity level with Southampton, which already is combined with Pierson and Bridgehampton, but Southampton’s leadership and parents, according to Joe Vas, East Hampton’s athletic director, quashed the idea inasmuch as the playoffs would have been forgone.

East Hampton’s junior varsity, which went 2-5 in the 2018 season, had its moments, particularly in its homecoming win over William Floyd’s freshman jayvee — as good as any freshman-sophomore jayvee in the county, Floyd’s A.D., Mark Mensch, said — and in its season finale at Southampton, a traditional rival, a game that it lost 41-40 when Kevin Bunce Jr. was stopped just shy of the goal line in the final seconds.

Bunce, an excellent rugby player as well, who is to play in international competitions in that sport this summer, is expected to be one of Bonac’s returnees, as are, among others, Santi Maya, John Berti, and last fall’s quarterback, Topher Cullen.

Seniors cannot play jayvee football, “the only bad thing” when it comes to sticking with a jayvee only, McKee said. Those five number Christian Johnson, a gifted athlete who scored three touchdowns in the Southampton game (and would have had another had it not been called back because of a holding call), Nick Lavelle, a big two-way lineman, Danny Ortiz, John Albarracin, and Cody Bezubek, who played in the goal for the Southampton-based South Fork Islanders boys lacrosse team this spring.

“We’ll have lots of juniors, a bunch of sophomores, and I’m going to Springs, Montauk, and East Hampton to recruit as many incoming ninth graders as I can,” McKee said, who added that there will be a homecoming game, “though when and with whom I don’t know yet, but most certainly we’ll have a homecoming game.”

Last fall’s East Hampton Middle School team, coached by Dave Fioriello and Rob Rivera, did well, though the numbers were a little low.

East Hampton, McKee said, will play its Conference IV counterparts. There are no playoffs at the jayvee level, he added, in answer to a question.

Informal workouts, on Monday and Wednesday evenings at the high school, have already begun. His charges have also been working out in the high school’s weight room of late, with Lorenzo Rodriguez, his assistant, and with one of his brothers, Kelly McKee.

When this writer said the team might wind up being one of the best jayvees ever fielded here, McKee did not disagree.