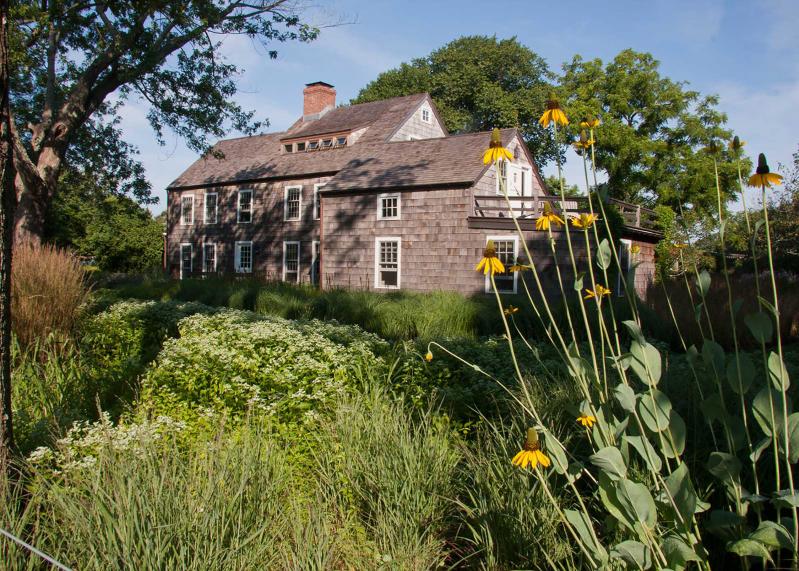 A property in Springs with a house dating to the 18th century and a garden designed by Eric Groft, a renowned landscape architect, will be on this year’s Landscape Pleasures garden tour.
George E. Brown
By Mark Segal

A gray and rainy spring did little to uplift the spirits, but it bodes well for the gardens of Landscape Pleasures, the annual horticulture event of the Parrish Art Museum in Water Mill. This year, in addition to the usual Saturday symposium and Sunday garden tours, a related workshop and film screening have been added to the offerings.

The workshop, which will take place at Marders in Bridgehampton tomorrow from 10 a.m. to 3 p.m., will afford an opportunity for gardeners and landscape designers to pick the brain of Noel Kingsbury, the noted English designer, writer, and teacher who is also one of the three presenters at Saturday morning’s symposium.

The garden-based workshop, which includes lunch, will encourage participants to observe garden and landscape plants, focus on their growth throughout the year, and learn how to assess prospects for their longevity and suitability for a variety of garden locations.

Thomas Piper’s documentary “Five Seasons: The Gardens of Piet Oudolf” immerses viewers in the work of the celebrated Dutch garden designer and plantsman whose work includes the High Line in New York City, the Serpentine Gallery in London, and the Venice Biennale.

Shot in the tiny village of Hummelo, where Mr. Oudolf has lived and worked for 35 years, as well as at some of his best-known public works, the film illuminates his radical approach to planting design. The screening, which is co-presented with Hamptons Doc Fest, will take place tomorrow at 6 p.m. A discussion between Mr. Piper and Terrie Sultan, the museum’s director, will follow. Tickets are $15, $5 for members and students, and free for Landscape Pleasures ticket buyers.

The Landscape Pleasures symposium, set for Saturday from 9 a.m. to 1 p.m., will feature presentations by Eric Groft, Simon Johnson, and Mr. Kingsbury. A principal of Oehme, van Sweden, which is located in Washington, D.C., Mr. Groft is a leader in ecological sensitivity, environmental and wetland restoration, and shoreline stabilization and revetments.

Based in Bath, England, Mr. Johnson and his associates have worked under a broad range of physical and climatic conditions, from the shores of the Baltic to the southern Mediterranean, and from Maine to Texas. Mr. Johnson will highlight two completed projects, one in England and one in Connecticut, and introduce a restoration underway in Scotland.

Best known for his promotion of naturalistic planting design, Mr. Kingsbury is particularly interested in improving teaching in horticulture and building global links between colleagues. He has written more than 20 books, including four with Mr. Oudolf. For Saturday’s talk he will share memories of his 25 years in the field and discuss a variety of wild-style planting schemes from Europe.

The self-guided tours of four private gardens will take place rain or shine on Sunday from 10 a.m. to 3 p.m. The garden of Judy and Aaron Daniels is situated on six acres in Bridgehampton. The influence of British gardens is represented by different “rooms”: a Japanese garden and teahouse at the edge of the pond; a boxwood maze, and a “secret garden” entered through a red wrought-iron gate.

Woodlands, the East Hampton property of Vincent Covello and Carol Mandel, is typical of many Asian-inspired gardens in that there are relatively few flowers but considerable attention to variations, textures, and space. The acreage consists of 31 distinct garden areas and features more than 80 species of moss.

Oehme, van Sweden designed the two-acre garden on Accabonac Harbor in Springs, opening up the site, taming the overgrowth, and placing swaths of grasses and perennials that alternately conceal and reveal the landscape. Surrounded by plantings that overlap the coping, a swimming pool to the rear of the site looks like a pond in a meadow.

Also in Springs is a garden on almost four acres on Gerard Drive with views of Accabonac Harbor. Designed by Abby Lawless, the landscape includes woodlands, a meadow planted with Panicum and fescue, and an enclosed kitchen garden where roses, herbs, and flowers are protected from deer.

Tickets to the symposium and garden tours are $250, $200 for museum members. Ticket purchasers at the sponsor level or above ($400) are invited to a private cocktail reception at the Southampton garden of Clelia and Tom Zacharias on Saturday from 5:30 to 7:30 p.m. The Noel Kingsbury workshop is $500.

Mashashimuet Park's History and Future
A Conference for Young People to Create Solutions
Get Outside, Get Moving
END_OF_DOCUMENT_TOKEN_TO_BE_REPLACED