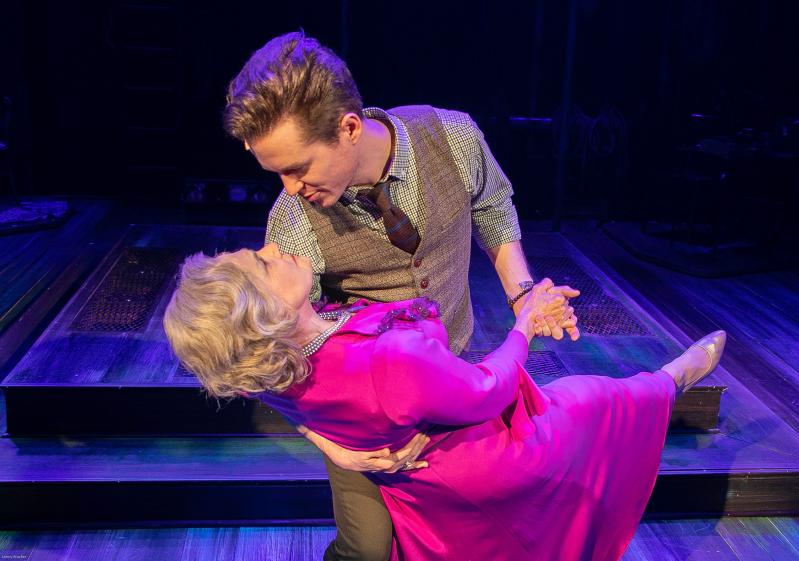 A new comedy-drama called “The Prompter” is getting its world premiere now through June 16 at Bay Street Theater in Sag Harbor. The play might be what one calls a “grower” — that is, a work that is slow to build but keeps gaining momentum until, almost before you realize it, you find yourself in the emotional grip of its two-person cast.

The play involves an acting legend named Irene Young, who returns to the Broadway stage after a 40-year absence. When she has trouble remembering her lines, she invokes the help of a “prompter” — someone to read the lines to her from offstage into a small microphone in her ear.

Along the way, of course, the prompter becomes something much more to Irene. And it is this complicated relationship — of diva and devoted underling — that is the play’s dramatic engine.

The prompter, named Wade Dooley, is played by an actor named Wade Dooley (who also wrote the play), so one is tempted to assume a strong autobiographical element to the work. The character Wade grew up in Illinois, fell in love with theater, and, like thousands before him, made his way to New York to become an actor, only to find limited success.

The great irony of “The Prompter” is that in a way he has succeeded, since Wade basically “acts” the play from his hole in the wings, feeding Irene not only her lines, but inflections and stage direction as well. Indeed, it later becomes a matter of contention between the actor and the prompter just how much Irene owes to Wade for the performance she has created.

Naturally, we have seen characters like Irene Young before, the cantankerous diva driven by a grandiose ego and debilitating insecurity. In fact, part of the play’s slow start is that the two leads are such familiar types. As Irene and Wade fill us in on their back stories, the information we get sounds like that of characters from other plays and movies (“The Prompter” seems to borrow from both “Sunset Boulevard” and Ron Harwood’s 1980s play “The Dresser”).

Irene Young, for example, grew up in West Virginia with a verbally abusive father, moved to New York with “20 dollars in her wallet” and clawed her way to the top by any means, including sleeping with a number of directors. Also familiar is her reason for being out of the theater so long: no good roles for women. (Not in all those 40 years, Ms. Young? I could think of few.)

Luckily, Tovah Feldshuh shades her character with enough empathy to cut against the tropes, and both the writing and the actress hit a high point late in the play when Irene rages thunderously at the difficulties of being a woman in show business. You can hear a ferocity in these lines, as if they come from somewhere deep inside both Irene and Mr. Feldshuh.

But this is Wade Dooley’s play, after all, on nearly every level. “The Promp­ter” was obviously created as an acting vehicle for himself, and Mr. Dooley delivers an utterly winning performance, showing a gift for light comedy as well as pathos, such as his quietly stunning monologue about the loneliness of living in New York City. His Wade is likable, witty, and self-deprecating as he deftly narrates the action in way that is funny but never ingratiating or intrusive.

As directed by Scott Schwartz, there are clever uses of offstage voices to include ancillary characters (whom we don’t see and don’t need to).  And there is a finely staged Tony Awards ceremony in which we see both Irene’s acceptance speech and Wade watching from the darkness of his apartment, though the actors are just feet away from each other.

It is an important scene, and the very crux of the play. Will the diva thank her long-suffering assistant for his hard work, or will her insecurities not allow her to acknowledge him?

The answer might be self-evident, though the predictability of “The Prompter” does not, by play’s end, affect its ability to move us. Ms. Feldshuh and Mr. Dooley’s fine-tuned chemistry wring all the poignancy from this familiar but funny and heartfelt play.