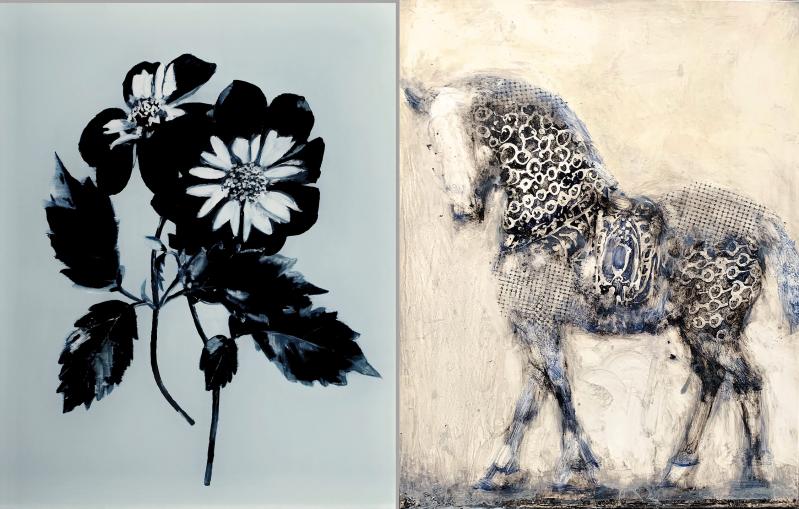 We are accustomed to seeing “small works” shows in the winter around the holidays, when people are thinking about gifts. The high season is typically known for larger, even colossal works, both in size and spirit.

There are exceptions, including Edsel Williams’s opening act every summer, “9999,” in which 30 or more artists are exhibited salon style at the Fireplace Project in Springs. No work is more than $9,999, with some much less. His gallery and show will open on Saturday.

Such an approach has caught on at Ille Arts in Amagansett, where Sara De Luca has brought together three artists who tend to work in smaller formats. All three “are very comfortable remaining within the constraints of a small canvas,” she said. “Their approaches and subjects are widely different, though.”

Whether by luck or design, the three artists she has chosen typically work in distinct genres, whether exploring the figure, landscape, or still life or botanical-related themes.

Greeting viewers on the right in the gallery are Claire Libin’s reverse paintings on glass. The old-style medium produces a luminous and romantic finish suitable for a floral subject. Apparently understanding that such a pairing could be cloying and old-fashioned, the artist goes for a spare and simple monochromatic style of presentation that keeps them looking up to date and not too too pretty. The glass paintings are accompanied by her watercolors and ink on paper with similar subject matter.

On the back wall is the work of Alicia Rothman, who combines silkscreen with oil and other mediums on panel. The transfer technique hints at mechanical reproduction, which she highlights by including the crosshatched markings of a screen, but she muddies the water with subtle brushwork and shading that could only be from an artist’s hand. She also bedazzles the works with tiny bits of mosaic, giving them added luster. She appears to draw her style from Byzantine, early Renaissance, and even early modern sources, with the panel support lending an antique quality.

Her subject matter varies from landscape features such as trees to cityscapes to what seems to be her favorite, horses. These are often done like a 15th-century Paolo Uccello painting, formalized and regal, but not always. Sometimes they are depicted more casually, as if captured out West. She will also mix up the treatment of a horse’s coat, sometimes adding patterning to make it look more fanciful and abstract. Her trees, which appear poetic, even come with words in one case.

Christine Ganeaux takes up the left and longest wall with her fragmentary figures, painted flatly. If the name sounds familiar, it is because she is also the proprietor of Ganeaux, a fashion boutique a few doors down on Main Street. Her career has included being a makeup artist as well as a designer, and she has had successful shops in New York City as well.

Her figurative oil and canvas subjects tend to be fragmentary and arbitrarily cropped. Faces, such as “Mollie,” appear off-kilter. “Nora” is seen only from mid-forehead to just below the chin, like a poorly edited Facebook profile photo. “Later” features a few toes and portions of two feet, and on it goes. The style is mannered and somewhat stilted. The subjects appear be less themselves than some kind of character they are channeling, looking arch and not lacking attitude.

But perhaps they are merely misunderstood. According to Ms. De Luca, the “portraits and still-life paintings are born as explorations of the differences between the psyche of the subject and the image captured by the artist.” That distance lends a certain unknowability that emerges in this way.

Over all, it’s a strong show made up of solid divergent parts to make a coherent whole. Each piece on view has a direct flatness and superficiality that belies the layers of its depth. The exhibition will remain on view through June 17.