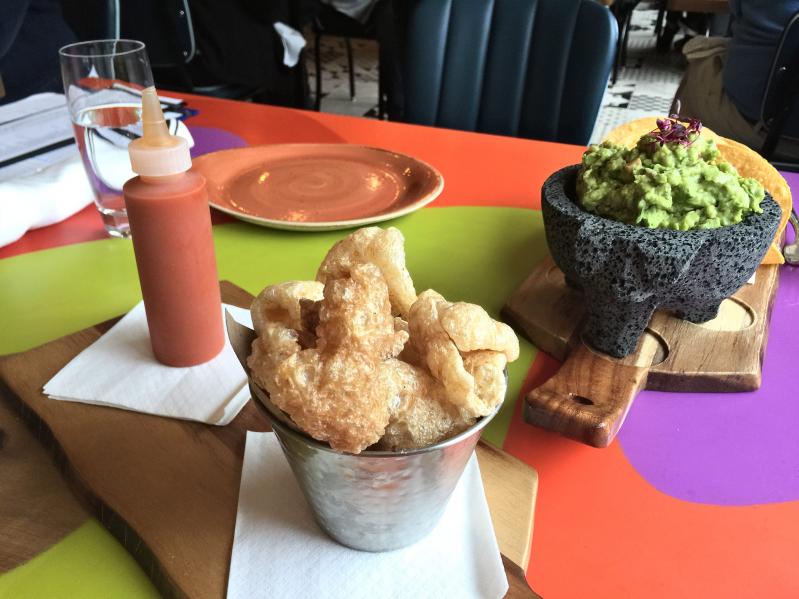 Some of you may believe that French cuisine is the most complex. Many think the multi-layered pastries of Vienna are the height of refined cookery. But until you have tasted the mysterious and complicated mole sauces of Mexico, you have no idea how complex and refined a dish can be.

There are many variations of mole sauce, some comprised of close to 30 ingredients and requiring hours of undivided attention from the chef. This is just a fraction of what I learned from the chef Joe Realmuto when I chatted with him about the opening of Coche Comedor in Amagansett.

Perhaps I should have begun this review by saying Coche Comedor is serving some of the best, most authentic Mexican food outside the Estados Unidos Mexicanosright here on the South Fork of Long Island.

Coche Comedor (“dining car”) is in the diner next to La Fondita on Montauk Highway. It operated as a diner for a while, then was used by the fine catering company Art of Eating. It is almost unrecognizable on the inside now, although many original design elements remain, such as some of the light fixtures and the concave curved ceiling.

Part of the huge kitchen was removed to create more seating in a back area where the blue leather booths are comfy and the walls covered with punched tin mirrors and a portrait of Frida Kahlo. The bar in front has graffiti by Host 18, and the rest of the dining car has tables painted by some illustrious local artists like Almond Zigmund, Toni Ross, Oscar Molina, Steve Miller, and some Hayground School students. The palette of the tables is bright but not exactly primary colors. I learned from Mark Smith, the other grand poobah of the Honest Man Restaurant Group, that on their research trip to Mexico they explored the Mexico City neighborhood of Xochimilco on the colorful trajineros (similar to gondolas), which are all painted in beautiful coral, yellow, lime green, magenta, and aqua. Tourists can float through the canals, buying food, listening to mariachi bands, and marveling at the floating farms and gardens known as chinampas. We sat at the Toni Ross table, painted with purple, orange, and chartreuse avocado halves.

The octopus was very tender and smoky from the grill. The plate had little dabs of black olive mayo and avocado crema, which added a nice richness to the octopus. Pickled red onions gave the dish some zing, and tiny black seed chive micro greens supplied another allium layer. Some people don’t even notice micro greens as a garnish, but I love to pluck them off and try to figure out what they are and how they may (or may not) complement a dish.

The chicken tamale was beautifully presented in half of a dried cornhusk, topped with queso fresco and a generous swath of pipian rojo, a spicy reddish sauce with plenty of ground nuts and seeds. This was one of my favorite dishes, along with the Chino Latino duck fried rice, which was superb and full of tender duck meat, scallions, and cilantro.

The queso fundido was a variety of cheeses melted with house-made chorizo, bits of green chiles, and topped with crunchy corn nuts. Best of all, served with it was a little cloth purse held with a clothespin filled with diminutive, house-made blue corn tortillas. I spilled my entirely full, barely sipped, prickly pear margarita when I saw those blue corn tortillas, I was so excited.

The chicharron were also excellent and mercifully a modest serving, because how much puffy, salty, delicious pigskin can one eat? This creation is an example of taking a humble, unexpected body part and turning it into a delicacy. They were topped with a spicy, tangy chile salt.

Lastly was the guacamole, served in a little piggy shaped molcajete, the traditional mortar and pestle bowl made of basalt. This was served with whole fried corn tortillas “so you can break them up the way you want to” according to our maravilloso waiter, Raul. The guacamole was very good, but we noted that it lacked enough salt and lime juice. I kind of like it super hot and zesty, so perhaps Coche Comedor’s is prepared with gringos and children in mind. Every table has a bottle of vinegary hot sauce so you can modify your meal if you want to.

For main courses we got the half chicken with a choice of mole sauces, the roast fish of the day “divorciados,” which was black sea bass on this evening, and pork rib carnitas. Aaaaand a side order of duck fat potatoes. All of the dishes were superb.

I am a mole freak so I asked for both mole negro and mole rojo. Our waiter Raul knew every dish backwards and forwards and had a contagious enthusiasm for all of them. He told us that one of the moles was made with 24 ingredients, whereas the other only had 16. The chicken was tender and moist, the skin almost melted off and crisp. It was sitting on top of a puddle of spicy, bitter, sweet, smoky, herbal, cinnamony, chocolatey, earthy, nutty, rich sauce sprinkled with sesame seeds. The bonus was another little satchel of baby blue corn tortillas.

The black sea bass was mild and flaky, with one side topped with a green tomatillo sauce, the other sauce a rich and spicy red. It was served on a piece of maguey leaf (a type of agave), and topped with julienned watermelon radish and a side dish of pickled cauliflower, carrots, onions, and jalapeño.

The ribs were very tender, not too fatty, zingy and tangy, and had some charred baby onions and scallions scattered about.

The writer Henry James once said, “Summer afternoon, summer afternoon; to me those have always been the two most beautiful words in the English language.” Allow me to paraphrase: “Duck fat potatoes, duck fat potatoes. . . .” You get my drift. They were tiny waxy potatoes, roasted to a crisp with slivers of jalapeño and onions.

Our waiter Raul, as I mentioned before, was as good as you could hope for. He was so good, my guests said, “They’re on to you. They know who you are. They gave you their best waiter. They know you’re doing a review.” Yes, Mark Smith knew I was doing a review and Joe Realmuto was 20 feet away facing the dining room, putting finishing touches on a dish. But I know for a fact, because I was watching him, that Raul was treating every other guest around us with the same care and enthusiasm.

For desserts we tried the coconut tres leches, the churro sundae, and a dish of Mexican chocolate ice cream. All three were great. The tres leches was called a custard, but it seemed to be between a cake and custard — light and moist, coconutty and creamy, not too sweet, topped with strawberries and crunchy bits of a toasted coconut streusel. The churro sundae was of a moderate size, thankfully. The churro was crisp and cinnamony, not greasy at all, served on the side of housemadehorchata ice cream with dulce de leche sauce, and toasted almonds. The

Mexican chocolate ice cream was insanely good — bittersweet chocolate with a hint of either ancho or cayenne. I will ask for this flavor every time I return.

These reviews are never fully my opinion, they are the opinions of my guests, whatever surrounding diners we chat with, and the waiter or waitress I pepper with questions. My friends Claude and Kathleen have tagged along for more reviews than anyone, from the dismal Southampton flash-in-the-pan nightclub masquerading as a restaurant to the grandest of grand establishments. At the end of our meal at Coche Comedor, Kathleen practically leapt out of her chair and exclaimed happily, “This could possibly be the best all around food ever!”

It would be a remarkable feat anywhere to open with such good food, smooth service, snappy and imaginative decor, and jolly clientele already in place. CocheComedor has done just that, and more.