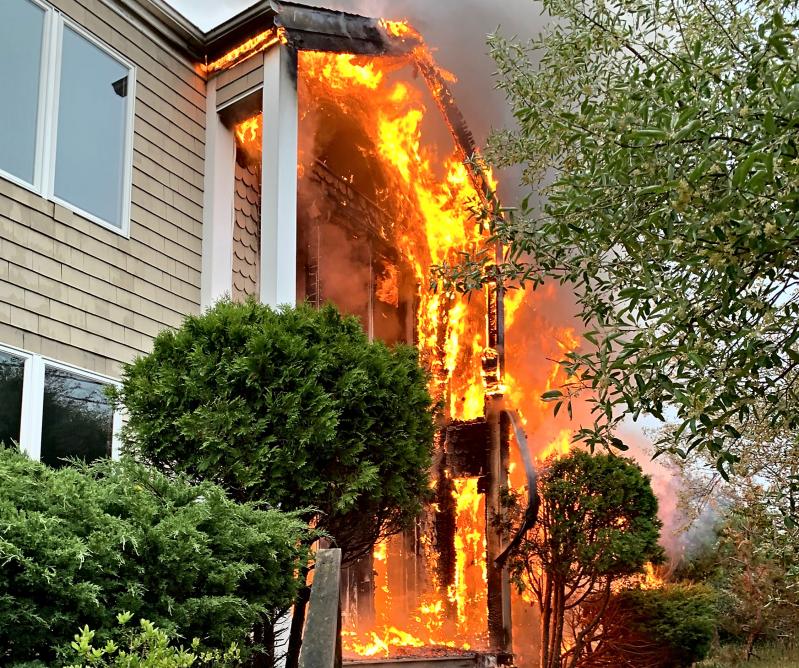 A neighbor awoke to the smell of smoke and saw flames shooting from a house at 29 Sandpiper Lane in Amagansett on Friday morning.
Ray Nirrengarten
By Taylor K. Vecsey

A fire that burned for quite a while before a neighbor awoke to see the flames destroyed a house in Amagansett on Friday morning.

Lois H. Kleinberg’s cat woke her up at 5:45 a.m. and she smelled smoke. Through her window she saw flames shooting from the roof of her next-door neighbor’s house at 29 Sandpiper Lane in the Sea Bluff Association. When she and her husband ran outside, they saw embers landing on their roof and deck.

“By the time I noticed it, it looked like Notre Dame,” she said yesterday. She phoned 911 and broke the news to the homeowners, Emanuel and Barbara Nissenbaum, who live in Merrick.

The Amagansett Fire Department was dispatched at 5:50 a.m. First Assistant Chief Chris Beckert arrived four minutes later to find a front corner of the house engulfed in flames, said Chief Ted Page, who took over as chief last month. “We believe it was going for a while before anyone knew it was happening,” he said.

“It was mainly a defensive operation. We knew nobody was home,” the chief said. There were no cars in the driveway, and the neighbors had told him no one was there.

“We had it knocked down fairly quickly,” Chief Page said. Most of the work involved pulling down ceilings and walls in the 2,500-square-foot, two-story house to check for pockets of fire. Firefighters left the scene by 8 a.m.

Tom Baker, the town fire marshal investigating the blaze, said a small clamp-on fan attached to a rafter in the basement was to blame. The homeowners, who use the house on weekends and in summer, had left a dehumidifier working in the basement with the plugged-in fan to circulate the air.

“It was a rather old fan” that was constantly running, Mr. Baker said. He believes it set the paper backing of the insulation on fire, and the fire crept up to the first floor and then the second floor, where the kitchen and living room overlook dunes to the ocean. “It was a time bomb waiting to happen,” he said.

The fire also raced up the stairwell. Doors to the first-floor bedrooms were incinerated. “We were hard pressed to find any hardware” on the doors, the fire marshal said. The house was “completely gutted.” The back wooden deck was still intact, however.

There was no automatic alarm system to alert the police and fire departments, Mr. Baker said. He was meeting with insurance investigators yesterday morning, but expected to list the cause of the fire as accidental.

Mr. Baker said the firefighters did a good job of quickly knocking down the fire and maneuvering their apparatus on a narrow road. He noted that they

had thoroughly doused the neighbors’ house with water, saving it from possible disaster.

“The firefighters were wonderful. They responded so fast. All the first responders were just wonderful,” Ms. Kleinberg said.

Mr. Nissenbaum agreed. “They were great. Everybody. The fire marshal was excellent, too,” he said. “It is a tough time, and they were very reassuring.”

The Nissenbaums bought the one-acre property in 1985 and finished building the house in 1988. The five-bedroom, 3.5-bath house had been on the market, listed with Corcoran’s Arlene Reckson for $5.5 million.

No one was injured while fighting the fire. However, Mr. Baker did fall through a floor during his investigation. He took himself to the hospital later to be checked out.