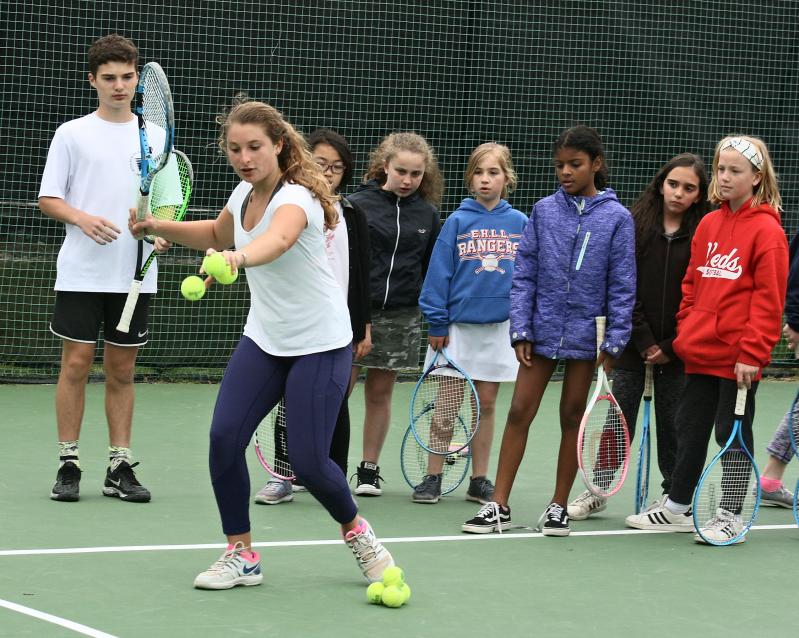 Ally Friedman wants to provide those in her clinic with the ingredients for a happy life.
Jack Graves
By Jack Graves

Ally Friedman, in her fifth year as a Ross Tennis Academy student, with one more to go, has overseen during the past six months a free tennis-based mentoring program for about a dozen girls here between the ages of 7 and 10.

On the eve of her final clinic at the Ross School last week, Friedman, a former member of Theresa Roden’s nationally and internationally recognized I-Tri empowerment program, said, “I-Tri motivated me to start something on my own, I-Tri and [Mark Crandall’s] Hoops 4 Hope. I went on a Ross trip to Zimbabwe last year — I’m going to go again next year — and my first day there I immediately wanted to do something like this.”

“I loved working with kids, and I wanted to change things for people, to slowly change the world,” she said, with a smile.

Last summer, she “created a small tennis program for boys and girls — it was just tennis. This year I wanted to focus more broadly on girls who were about to go into middle school, and who might be caring too much about what others might think. Girls, and I think all girls in this 7-to-10 age range, are in the same boat, whether they’re athletic or not, who need to know how important they are, who need a boost when it comes to their feelings of self-worth. . . . It’s about more than tennis. Theresa has come in to talk to them, I’ve had Greg Melita, who owns Hamptons Jiu Jitsu in Southampton, come in to teach them self-defense, and Hailey London, a health teacher at Ross, to talk with them about nutrition. . . . The idea is to connect them with the ingredients that can make for a happy life.”

She was getting credit for her work, Friedman said in reply to a question. “It was nice of Bill O’Hearn, who’s the head of our school, to give me credit, but that’s not why I did it,” she said.

In gathering together her first group, Friedman said she had talked with guidance counselors in Springs, East Hampton, and at Pierson in Sag Harbor, and with pediatricians and therapists and gym teachers. “I called all around, and Theresa posted something on Instagram. . . . They’re mostly from Sag Harbor and Springs. They love it a lot. I’ve got a lot of emails from parents saying how much their kids love it. . . . There’s a wait list of 10 for the fall.”

While she has played tennis from an early age, tennis ability was not a requisite, said Friedman, an experienced U.S.T.A. junior tournament competitor. “There were probably two who had played a couple of times. I’ve been working with a clean slate as far as tennis goes.”

“Yes, they’re getting better,” she said with a smile. “But, as I said, tennis isn’t the main thing — it’s about working on their self-esteem and helping them feel good about themselves and enjoying a healthy lifestyle.”

The Ross Tennis Academy had been very good for her, she said when asked. “There are all sorts of different cultures here, different people; it’s been amazing. I’ve got friends from all around the world, lifelong friends who I want to stay in touch with. And the teachers here have been very helpful, really supportive. They want you to do well.”

As a tennis academy student, she takes classes, in English, history, science, and mathematics, from 8 a.m. to 12:45 p.m., undergoes tennis training from 1 to 3:30, studies Chinese from 3:30 to 4:30, and works on building strength and improving agility from 4:30 to 5:30. Yoga is part of her training too, as have been occasional meetings with a sports psychologist, Dr. Paul Weinhold, “Dr. Paul.”

“The mental aspect [of tennis] has been the hardest for me,” Friedman said, in answer to another question. “I push myself super hard, and I’ve had to learn that you’ve got to be okay with it if you miss, and go on to the next point. Mindfulness is important, being in the moment.”

“Self-esteem, empowerment, and mental toughness all contribute to that. As Theresa says, it’s all about positive self-talk. When you tell yourself you’re not good, you won’t be. Fake it until you make it. If you’re not confident when you’re playing in these tournaments, if you don’t stand tall, someone will feed off it. Confidence is half the battle . . . it’s the first step.”

It had once been her dream as a kid to play on the pro tour, “but it’s so hard to get to that level. My dream now is to play college tennis and to have fun.”

She’s “been playing in these junior tournaments for years. I’m in the 18s now. Definitely they’re tough, very stressful. We play a lot of these tournaments and in showcases on weekends the year round. My program helps me take my mind off all the pressure.”

But no, she said, she was not in danger of burning out. “I’m very busy, but I wouldn’t have it any other way. I enjoy working out, playing tennis, and practicing jiu-jitsu — it keeps everything exciting.”

Friedman has been seen by numerous college coaches, and has been recruited. Recently, she’d visited Bates and Colby in Maine, Division III schools. Her game was good enough for Division 1, but “I like the idea of Division III schools, really good academic schools with good tennis teams. I like Butler too, where my sister [Tali] goes. . . .”

As for what she might major in, “I need to figure out what I want. I’m really interested in sports psychology.” Dr. Weinhold has encouraged her in that regard.

“My dream would be to be a sports psychologist with a famous team or with professional athletes — that would be an amazing job.”