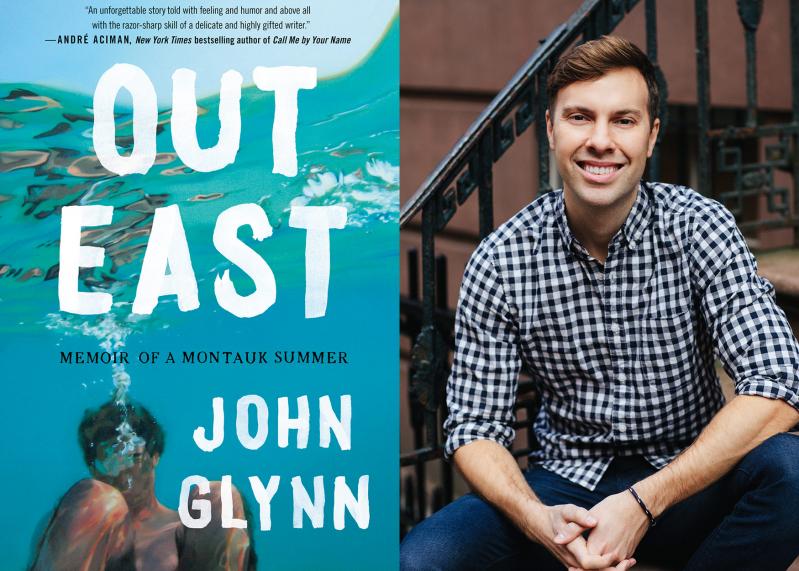 Every night for two years, John Glynn would lull himself to sleep watching Netflix episodes of “The Dick Van Dyke Show,” his laptop propped on a pillow. It was a balm for anxiety about his life’s lack of direction — his love life, that is; professionally he had a plum job in publishing — about his inability to connect with someone on a deeper level, about his sexual identity, no less.

He’s saved from his urban loneliness, indelibly depicted though it may be in “Out East,” his new memoir, by an invitation to join in a summertime share house across the “moon-dipped isthmus” of Napeague to where “the beaches were sweeping and majestic, and the town had a surfery charm.”

“Everyone finds love in Montauk,” Kirsten, a friend from his college days, says. “Even if it’s just for the night.”

The author’s difficulty in this regard is that at 27 he was just then coming to terms with his attraction to men, making this a coming-out story as much as it is a coming-of-age one, despite that summer’s “delayed pursuit of more adult concerns.”

“Most housemates fell into one of three buckets,” he writes, “the girls, the finance guys, and the gays.” At this point in his life, “You’re in a bucket of your own,” a house captain tells him.

The house, in Hither Hills and a bit of a time-warp job, what with its maroon shag carpet and shelves full of vinyl records and magazines from the 1970s, is dubbed the Hive, and although 30-some people would make use of it across eight weekends that summer, “This is NOT a share house,” the agreement all parties must sign defensively asserts. It is rather “a summer camp for adults,” in the words of a co-worker.

It absolutely dominates the narrative. After playing beer pong or flip cup or Kings as a “pregame” warm-up to the main event, the housemates trace a drinker’s progress from the Memory Motel to the Point Bar and Grill to Rusch­meyer’s, over to Cyril’s, back to the Shagwong, circling to take in the Montauket, draining red Solo cups of the stuff on the beach.

Some readers will simply be impressed by the fortitude of these young hedonists. Charles Bukowski never catalogued so much booze. F. Scott Fitzgerald himself would take any one of them by the elbow and gently steer him to the drunk tank for the night to dry out, sliding burnt toast and tea through the bars till liver function and fine motor skills returned.

Other readers will be fascinated by all the share house good times they’ve never experienced and never will, from the (gay) in-pool groping to the (hetero) kitchen counter fornication, food prep be damned, to our faithful correspondent walking in on his (gay) friend’s exertions with a new acquaintance in the basement, where “an unzipped sleeping bag was bobbing up and down.”

Packed bowls of weed are torched out on the deck under the stars. One “finance bro” cuts up lines of cocaine with a gold Amex card. Our hero, seeking acceptance, indulges.

Still, it’s not all fun and games. The overtaxed toilets stop working at one point. The partner of a house captain precipitates a lover’s spat after he “got blackout drunk and fell asleep on his plate.” Later, he’s jackknifed across the stairs at such an uncomfortable angle, unconscious with drink, that returning revelers presume he’s dead. They leave him there.

“Out East” is an exceedingly quick read, which doesn’t necessarily mean slight or superficial. The author, after all, drops in carefully placed flashbacks to his lonely childhood, usually involving his late Irish-Catholic grandmother, Kicki, from Springfield, Mass., a calm and kindly soul, the story’s moral center, and his all-time favorite person. No dummy, he regularly prays to her.

For all the bad and ridiculous behavior, to his credit he often seems bemused. “I miss abs,” he hears a housemate lament, refusing to engage over his egg sandwich from the Bake Shoppe. Another time, “A statuesque blonde clutching an electronic BMW key” — Ashley, studying to be a chartered financial analyst — “entered hair-first.”

Four pages later, however, a passage features writing only a millennial could love, as the Memory Motel, “the Mem for short,” is called “a flexion point in the night.”

You don’t have to be the Apostle Paul to recognize that what’s solely of the body is depressing. So why do the housemates do what they do?

During what they call “morning therapy,” hung over, “defenseless and unvarnished in a decidedly collective way,” they gather in the share house living room for talk and recuperation, seeking “comfort in physical proximity,” reassurance, feeling “swaddled and safe.” Call it a communal experience for young people finding their way in the world.

About our man’s search for more one-on-one companionship, it’s complicated. It’s affirmation and denial all at once.

Back in his New York apartment, the cold winter seems to bring new life. And if on occasion he needs to get through it with a little help from Dick Van Dyke, leading with his chin in glorious black and white, that’s okay too. Just don’t binge. All things in moderation.