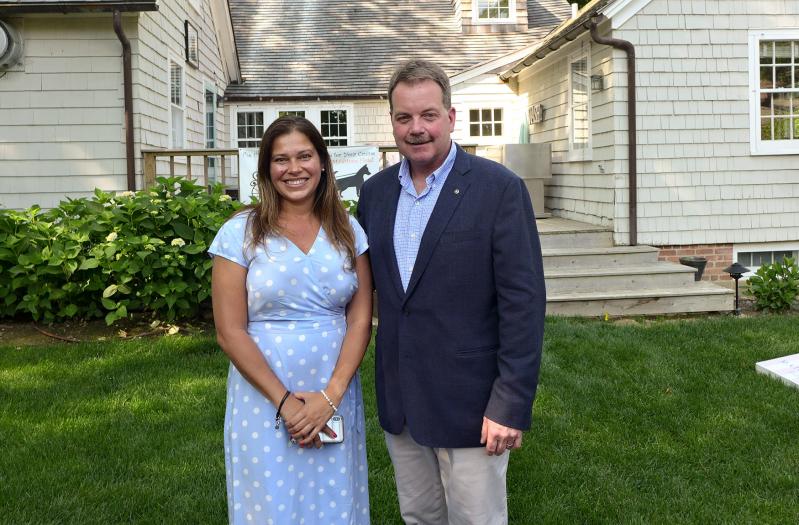 Jerry Larsen, a former East Hampton Village police chief who is running for village mayor in 2020, held a kickoff party for his campaign on Sunday and introduced his running mate, Sandra Melendez, an attorney who is seeking to be the first Latina to serve on the village board.

Speaking to supporters from the backyard of the Maidstone hotel on Main Street, Mr. Larsen, who is on the New Town Party line, said “the hotel had to fight the village to have events out here,” and promised, if he is elected, “to change the restrictions and loosen it up a little bit.”

He called for creating a new office of business and tourism, touted a plan to install a centralized sewer system, and promised to enact 12-year term limits for mayors and trustees.

“I want our party to represent a break from the past,” he said.

To reinvigorate the commercial district with new businesses, a centralized sewer system is needed, he said, and he has developed a plan to install one that would not require the use of taxpayer money.

He also has a plan to increase low-income and senior citizen housing, he said.

Although he did not provide specifics on either, he said he would do so in January. “I can back up every one of those things with an actual idea,” he said after his speech.

He had first met Ms. Melendez, who is originally from Puerto Rico and moved to East Hampton in 2007, during his time as police chief. “When I decided to run for mayor, I wanted to have somebody smart, and who I can depend on, and I thought of her,” he said.

Ms. Melendez practices immigration, tax, and criminal law from her office on Park Place in the village. Being a mother of four, she said, had been one of the biggest factors in her decision to run.

The village needs to be more family-friendly, she said, and less outdated.

The Reutershan parking lot is in need of a redesign, she said, and she constantly hears complaints from residents about the walkway in Herrick Park. “People tell me we need better lighting so our workers don’t feel afraid to walk to the long-term parking lot,” she said.

“I have my family here, I have my business here, I work here, I play here, and I want to change it,” she said of the village.

Ms. Melendez agreed. “That’s my every day,” she said. “I try to get a resolution for what’s happening in somebody’s life. I try to think outside the box, if we cannot go this route, let’s go the other route. That’s what I do.”