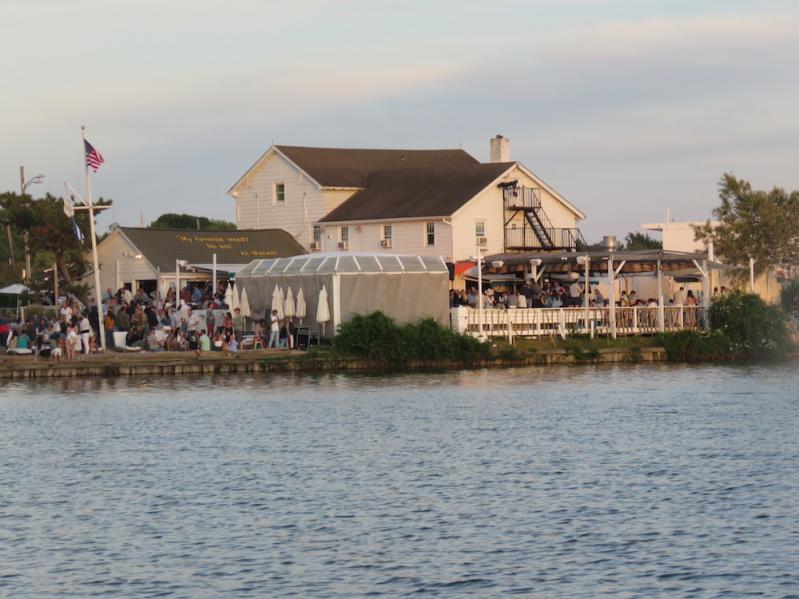 Almost three years after promising East Hampton Town officials they would tackle overcrowding, excessive noise, and environmental concerns at the Surf Lodge in Montauk, the owners have launched a full-scale effort to address the problems.

In June 2016, Jayma Cardoso and Michael Walrath, the owners, signed an agreement with the town that was intended to put to rest many of the issues. They agreed to obtain site plan approval for recent improvements to the property, which borders Fort Pond; to install a low-nitrogen septic system, and to adhere to a more restrictive music permit, which was conditioned on total occupancy of the premises (including the outdoor areas and restaurant, but not the hotel rooms) being limited to 395 people.

Live music would only be allowed between mid-May and mid-September, five days a week, and for no more than two hours a day.

A fire-prevention sprinkler system would have to be installed to service the lobby, dining room, and bar, and no more than 50 people would be allowed to queue in front of the hotel while awaiting entry.

“This was a really constructive agreement between us and the town,” Mr. Walrath told The Star at the time. “I think everything in there is reasonable; it paves the way for us to do the things we’ve been meaning to do for some time.”

As years went by, however, the Surf Lodge failed to comply with many of the conditions. At a meeting of the New York State Liquor Authority in March, Vincent Bradley, chairman of the agency, expressed exasperation at the number of violations that have continued to accumulate, particularly for overcrowding. “They made stipulations in 2016 with the town, which clearly were not followed,” he said. “The number of people that are packed into this place is completely unreasonable.” Mr. Bradley also said the resort had not been limiting live music to the agreed-upon number of hours and days.

The liquor authority referenced the most recent infraction, a  Sept. 1, 2018, musical performance by the duo Frenship. That evening, the Surf Lodge was cited for, among the other violations, allowing 250 people to congregate on a deck that has a legal capacity of 112. “That’s a nightmare waiting to happen,” said Mr. Bradley.

Prior to the March hearing, lawyers for the town notified the liquor authority that the town “will not be issuing the Surf Lodge a music entertainment permit for the 2019 season.” The state authority then also revoked the music permit. It was reissued, however, earlier this month after the resort began making a serious effort to comply with the 2016 agreement.

Responding to emailed questions through Kayla Riley, a spokeswoman, Ms. Cardoso said that Surf Lodge now abides by all of the conditions of the music permit, including the occupancy limit.

“We worked with the fire department and the town, and set a limit at 395 guests,” she said in an email. “We’ve coupled that with a reservation-only policy, so there is no question of whether there is space to allow more guests on the property. This way, everyone knows in advance if we can accommodate them.”

Recently, the hotel has also replaced its conventional septic system with a low-nitrogen one. According to Ms. Cardoso, the new system will remove 1.6 pounds of nitrogen per day, or approximately 144 pounds over the course of the summer.

In an addendum to the 2016 agreement, East Hampton Town also sought parking and circulation improvements at the popular resort, which has been blamed for creating severe traffic problems along Edgemere Street. The town had asked that an access point be created within the boundaries of the existing parking lot where livery vehicles could discharge their passengers.

“We came up with a plan to open a curb cut onto Edgemere Street,” said Ms. Cardoso. “Now, vehicles enter our property from the north, moving in a circular pattern, toward a new exit to the south.”

The new egress and ingress points have created “a balanced flow for traffic,” she said, while the reservation-only policy has cut down on the number of vehicles seeking access to the site.
--
Correction: An earlier version of this article incorrectly attributed quotes from Jayma Cardoso, a Surf Lodge owner, to a spokeswoman, Kayla Riley. Ms. Cardoso responded to emailed questions through her spokeswoman, but the quotes were hers, not Ms. Riley's.