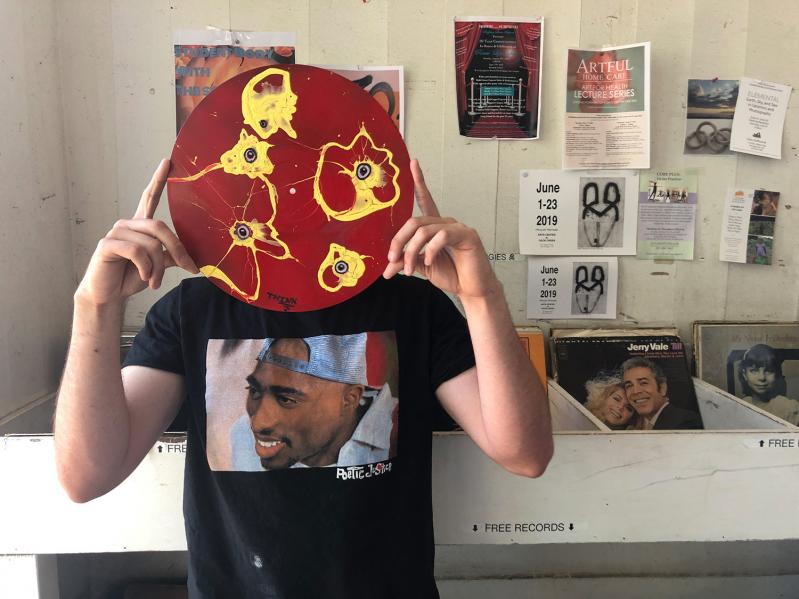 Wonder no more about the mysterious painted records popping up in public spaces and on utility poles from Southampton to Montauk.

It’s the work of Brandon Hernandez, who goes by the moniker Think, and whose street art began as an obsession with sound.

The East Hampton artist studied audio production at a Board of Cooperative Educational Services program, graduating from high school in 2016. Mr. Hernandez recalled one particular class in which his teacher first played digitally recorded music for the students, then switched to music on vinyl.

“It blew my mind how, when you’re really listening for it, how different each of them are,” Mr. Hernandez said in an interview. “When it comes to vinyl, it’s an analog signal. We speak in analog. It feels warmer; it feels present. On top of even vinyl records, that class, audio production, taught me about how life as a whole works in waves and everything has a vibration. Sound, touch, light — it’s all vibrations.”

He’d also been inspired to start painting earlier in his life. He considers himself a mixed-media artist, using oil markers, spray paints, and found objects, among other things. Growing up in Springs, and as a past employee of Project Most, the after-school and summertime program for students in Springs and East Hampton, he’d been to the Pollock-Krasner House on multiple occasions.

Fast-forward several years, when Mr. Hernandez started working at Mainstay in Amagansett. By proximity he got to know the folks at Innersleeve Records, too, and discovered the store’s free vinyl rack.

“I thought it was really cool,” he said. “I would walk over to the store every day and pick up two or three. Eventually that turned into 200 or 300 at my house, but a lot of them were too scratched up to play.”

He had already been painting and drawing, so the next logical step, he said, was to experiment using old vinyl as his canvas.

The outcome is visible all over, and once you find one, you’ll start to notice the others. There are faces, there are landscapes, there are written messages, there are abstract designs.

“It puts out a creative vibe onto the streets,” Mr. Hernandez, who’s a bit shy about the whole thing, said. “Everyone knows that this is an art mecca — we are really ahead in terms of the arts scene in the area — but I feel like we’ve almost reached a plateau.”

“But we’re 30 years behind” in the street art medium, he said.

“Not street art that you put in a gallery,” he explained. “There’s stickers that get put on signs, and I’ve done that myself, too, but I felt like we needed more of a street art presence out here.”

Galleries can sometimes be intimidating, he said, so he hopes his painted vinyl makes people feel more comfortable experiencing art.

“Some people feel like they can’t walk in or they’re not allowed, which obviously isn’t the truth,” he said. “Why I felt like it was awesome to put art out onto the streets is that everyone has the ability to experience it equally.”

He anticipates that some will get taken down, but that’s okay with him. He said he has made hundreds of them.

Chris Clark, a manager at Innersleeve, said he has heard of people repurposing Innersleeve’s vinyl giveaways, but not quite like this.

“I think what he’s doing is really cool and interesting,” Mr. Clark said. “Out here it’s always been a haven for artists, but to see it on a street level and a contemporary level, that feels a little more modern.”

One day, he said, he showed up to work and found that Mr. Hernandez had put up a painted record on a utility pole in front of the store. It reads, “To Innersleeve Records, thank you! For always showing support and providing records!”

“We get feedback from the community that people like what we’re doing, but that was nice,” Mr. Clark said.

Mr. Hernandez said he signs all his work “THINK,” with the “INK” underlined, because he wants people to express their thoughts.

“The moment you use any kind of medium — ink or paint or music — the moment you use that to express those thoughts, now it’s something that’s tangible and can be shared and elaborated upon,” he said. “It’s greater than just the thought on its own.”

He said he hopes his street art inspires people to find some way to share what they create.

“The job is really to spread love and positivity and caring energy,” he said. “You also have to have that part of you that’s accepting of letting it go. At the end of the day, if I just make a bunch and keep it all in my shed, no one ever sees it. I enjoyed making it and it helped my life while I was making it, and I know it can do so much more.”