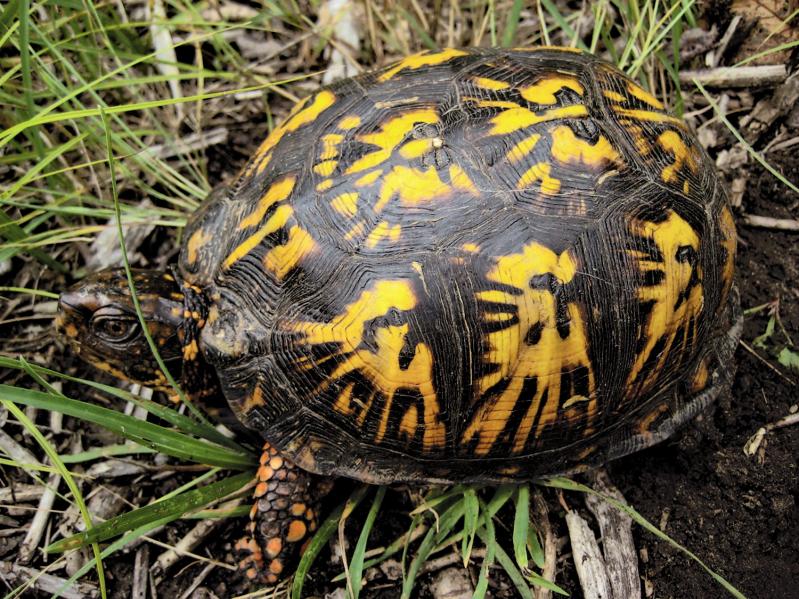 The Eastern box turtle needs room to roam and the occasional helping hand across the road.
Victoria Bustamante
By Tyler Armstrong

It’s hard not to love the humble box turtle. This methodical, omnivorous, unmistakable symbol of slow-and-steady was once far more common (as anyone who grew up here can attest to), but this unique local animal is far from being a lost cause.

Many people care and are working toward ramping up the box turtle population on the South Fork. I’ve seen signs that call the Eastern box turtle “Almost Extinct in Suffolk County,” and I commend the effort to raise awareness, but I think a more optimistic wording would help. The phrase “almost extinct” implies a tragic inevitability, which some people may just drive by and hopelessly accept.

I’d like to see something like “We Can All Help Them Recover!” We need to inspire hope in people to work toward a stable population. I truly think we can all help, and if we all do, it may not be as daunting as it seems.

Many isolated forests of East Hampton have experienced a total loss of their box turtles, but they still thrive in many larger woodlands. They require large, connected habitat, as they often move between high and low areas in response to rainfall, and slowly walk a wide loop to ensure a steady food supply. Decades of increasing development have disconnected many forests that were once contiguous. Unfortunately, this means our only land turtle must make many risky crossings just to live as it normally would.

You’ve heard it before, but I’ll say it again: Help the turtle cross the road! Don’t turn one around if you see it trying to cross. Box turtles have an incredible innate navigation sense and know exactly where they want to go, so help them in the direction they’re facing. Never hold a turtle by its tail, but pick it up by the sides of the shell.

Don’t worry, box turtles don’t bite, they’d rather hide in their shells than take on a larger animal like you. Retreating into their shells was a great strategy for all the dangers that existed as these turtles evolved, but unfortunately they provide virtually no defense against the modern danger of cars when trying to cross the road safely. We created the car problem, so it’s our responsibility to help them deal with it.

There are a lot of things people don’t know about this enigmatic animal. The Eastern box turtle is our only truly terrestrial turtle, but we have many aquatic ones, including freshwater painted turtles, snapping turtles, and introduced red-eared sliders in our ponds, terrapins in the bay, and a few different sea turtle species that travel our ocean waters.

A turtle’s shell is part of its skeleton, so it can never come off, and they certainly never shed shells or find new ones. The shell is essentially a fusion of the rib cage, and you’d be hard pressed to find an animal that can remove its rib cage. If you find a turtle shell in the woods, it is from a turtle that died, and nothing will come along to wear the shell, though some animals may gnaw at the bone for extra calcium, so it’s best to leave it be.

As omnivores, box turtles enjoy a huge variety of local fare. Earthworms, berries, mushrooms, crickets, spiders, grubs, and even deer meat are all on their summer menu. They have a natural resistance to mushroom toxins and, like many turtles, can actually store the poison in their skin without harming themselves. They’re clearly not picky eaters, though they prefer high-calorie foods, so please don’t feed turtles lettuce, as it’s mostly water and very low in nutrients.

Of course, you should never, ever keep a box turtle as a pet or remove one from the wild. Please don’t do this. The only help they need from us is in keeping them from getting struck by vehicles.

Although claims of century-old individuals are unproved, they may not be far off, as box turtles do live for many decades. Their longevity also comes with their biggest weak point in adapting to human development: the need to survive for many years before reproducing. Box turtles around 5 years of age may be sexually active, but may not successfully lay eggs until 10 years of age or older. Even if they do survive to maturity and find a mate, young breeders may lay only a few eggs in a year.

Raccoons are a major predator of eggs, and in some cases 80 percent of box turtle nests are raided by raccoons. This leaves only a select few baby turtles to mount the challenge ahead.

It’s become increasingly hard for them to walk their big loops in search of food, move to and from water sources, and seek out mates when they finally reach maturity, all while crossing our many busy streets with increasingly fast traffic. Some things we can do are obvious, like pulling over if we see one in the street, carefully stopping traffic, and helping it across to where it wants to go.

Other things are less obvious, like ensuring that street curbs are on a slope and not a right angle so smaller turtles can get over them and grow up to carry on their species. Since much of their food is insects, worms, and spiders, ensuring these small animals are thriving gives box turtles a leg up. Less fencing in forested areas would also help, as pool and deer fences cut habitat up and restrict the movement of turtles in our town.

The biggest and easiest way to help is to raise awareness. If someone you know is visiting for the summer, make sure he or she knows these turtles exist, are important, declining, and need our help. If you live here, learn more about this amazing animal and be on the lookout so you can help them safely continue their journeys through our town.

Box turtles can continue to thrive on the East End, but they need everyone onboard. With continued land preservation, well-planned highway repairs and improvements, robust nature education, and the occasional hand across the road, we can all be part of seeing Eastern box turtles experience a welcome recovery in East Hampton and beyond.

Tyler Armstrong grew up in East Hampton, worked as an educator at the South Fork Natural History Museum for three years, and served one term on the East Hampton Town Trustees.