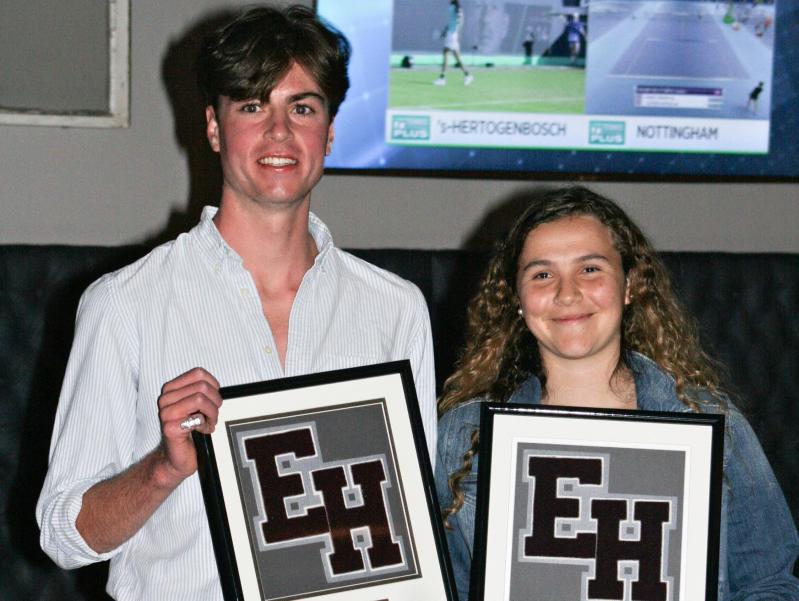 Ryan Fowkes, who holds most of the long-distance indoor and outdoor track records at East Hampton High School, and Rebecca Kuperschmid, who played number-one on the girls tennis team and who, until she suffered a shoulder injury midway through the season, was the cleanup hitter and shortstop on the softball team, were frequently cited during the course of a senior awards ceremony held June 12 at the Clubhouse here.

Fowkes, who will attend George Washington University on a partial running scholarship in the fall, and Kuperschmid, who is to attend Duke University, were recipients of the Paul Yuska award, given to the senior class’s top student-athletes. Earlier in the spring, Kuperschmid was feted as a Channel 12 scholar-athlete awardee, one of a handful picked for that award throughout Suffolk County.

Kuperschmid, along with Ryan Bahel, a member of the golf team and the championship boys swimming team, received a scholar-athlete plaque from the high school’s principal, Adam Fine, attesting to her 100.9 weighted grade-point average. Bahel’s G.P.A. was 99.8. The recipients must participate in two varsity sports to be considered for the award.

Fowkes, with Ella Gurney, a girls volleyball and softball standout, won the Butch Dellecave Suffolk County Hall of Fame award “in recognition of exemplary representation of [their] community during the athletic year.”

Kuperschmid and Fowkes also were recipients of Old Montauk Athletic Club scholarships, which were conferred at the club’s holiday dinner last December. Speaking of OMAC, Ethan McCormac, an all-state swimmer, received at the time a scholarship given out in memory of the late William O’Donnell.

Joe Vas, East Hampton’s athletic director, who presided over the ceremony, began by announcing the school’s varsity championship teams — girls swimming, boys swimming, girls volleyball, and boys tennis — and added that Turner Foster, who has played on the golf team for six years, and who is to attend Loyola University in Maryland, had recently finished 14th in the state tournament, “only 10 shots off the leader and five shots out of second.”

The South Fork Country Club in Amagansett, where the golf team plays its home matches, presented Foster with a $1,000 memorial scholarship, an award it gives out each year to a college-bound East Hampton golfer who “exhibits leadership, good character, and excellent golf skills.”

Girls volleyball, coached by Kathy McGeehan, sailed through league play with a 12-0 record and earned the top Class A seed in the county tourney, though Kings Park, the fifth seed, upset it in five in the tourney’s quarterfinal round.

The girls swimming team, which had on it only two seniors, went 5-0 in league meets, going undefeated for the second year in a row. That team went on to a runner-up finish to Sayville-Bayport (though it would have won had only the swimming events been counted) in the League III meet, and to a sixth place finish among the 25 schools that contended in the county championship meet.

The boys swimming team, with a 9-0 record, won its first title since the sport was begun here in 2010. The team, coached by Craig Brierley (who also coaches the girls team), won the League II meet as well, despite the fact that it had no divers. The second-place team, Hauppauge, won 27 points in diving, and still trailed the Bonackers 298-277 at the end.

Boys tennis likewise went undefeated in league play this spring (it was the fifth straight year that East Hampton had either won the league title outright or shared it with Westhampton Beach), and made it to the quarterfinal round of the county’s team tournament, losing 5-2 to Harborfields.

Back to the awards, the four-year Kendall Madison mentoring scholarships, in memory of a promising student-athlete who died young, were given out by Madison’s mother, Sharon Bacon, to Kurt Matthews, who pitched and played third base on the baseball team and was the boys soccer team’s goalie, and to Connie Chen, who played on the girls volleyball team.

Other winners were Musnicki and JiJi Kramer, two-sport athletes with grade-point averages of 100.05 in her case and 97.78 in his; Decker and Christopher Criollo, who were cited by Suffolk Zone for their “character, leadership, and outstanding participation in physical education,” and Lillie Minskoff (soccer, winter track, and spring track) and Tom Desmond (soccer and baseball), who received the V.F.W. sports and sportsmanship award given out to the junior class’s top student-athletes.

Pet Food, to Give and to Get
Plan to Repave Part of Route 27 in Montauk
Attention, Comic Book Lovers
END_OF_DOCUMENT_TOKEN_TO_BE_REPLACED