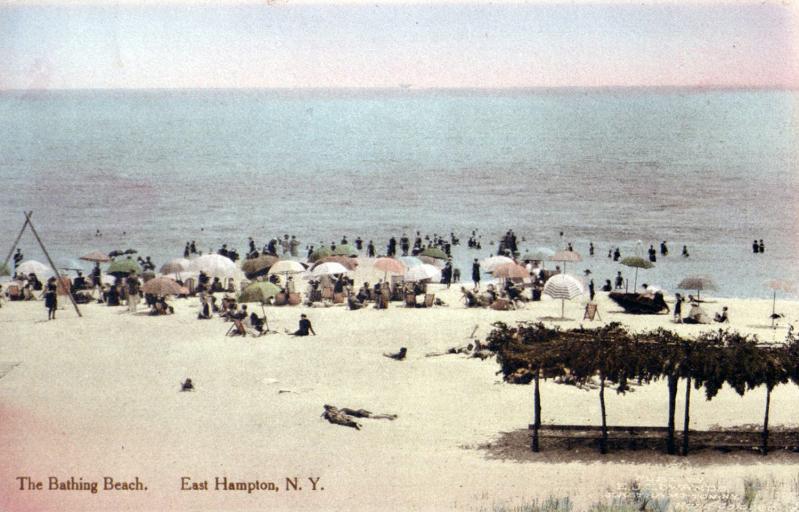 For many on Long Island, the start of summer and the end of the school year means a return to beach days. In particular, East Hampton’s beaches and bucolic atmosphere have drawn many visitors since before the 1870s. However, a typical day at the beach has changed in the last 150 years.

Despite the decades that have passed, this early color postcard of “The Bathing Beach” in East Hampton manages to capture how busy the beach can be on a summer weekend. There is no date on this postcard from the Harvey Ginsberg Postcard Collection, but the bathing suits are in a style that was worn before 1920. While many of the early postcards of East Hampton often use the phrase “Bathing Beach,” the name implied what is now known as Main Beach, which is easily identified by the bathing pavilion structure visible in other postcards of the same name (although the same terminology was repeated for beaches in other places, such as Indian Wells in Amagansett).

Visible on the beach to the left side of the postcard is a frame used for a breeches buoy, an early lifesaving device that relied on ropes. The swarm of beach umbrellas toward the waterfront will look familiar to many a modern beachgoer. If people forgot their umbrella or tent, an arbor (seen at bottom right) covered in vegetation, possibly grapes, offered a shady spot to get out of the sun.

Below the arbor, faint lettering in the corner identifies the postcard as hand colored and printed by E.J. Edwards in East Hampton. E.J. Edwards, or Everett Joshua Edwards (1871-1950), was the son of the legendary whaleman Capt. Joshua Bennett Edwards, who was one of the last offshore whalemen of Long Island. Edwards also operated a local pharmacy, in the building that now houses The East Hampton Star, and that was probably where this printed postcard was sold.