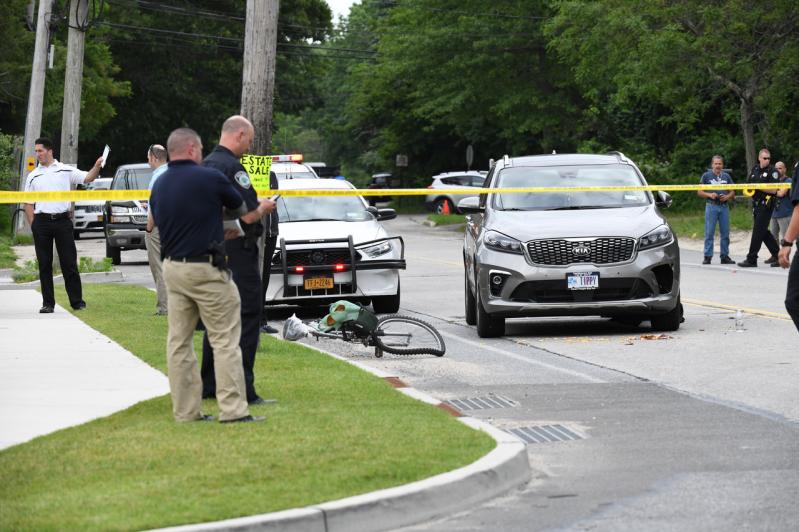 Detectives are investigating a crash that left a cyclist injured on Three Mile Harbor Road in East Hampton in front of Damark's Deli on Monday just before 4:30 p.m.
Hampton Pix
By Taylor K. Vecsey

Update, June 18, 11:45 a.m.: A bicyclist who was seriously injured in an accident on Monday afternoon may have been intoxicated, according to East Hampton Town Police Capt. Chris Anderson.

Fernando Sanchez, 40, of East Hampton came down Muir Boulevard on his bicycle and made a hard right turn onto Three Mile Harbor Road, going into the center of the county road, and colliding with a 2019 Kia heading north into East Hampton from Springs, Captain Anderson said on Tuesday. The accident occurred at 4:24 p.m.

Tippawan Sookshawee, 54, of East Hampton stopped immediately, he said. "She couldn't have done anything differently," Captain Anderson said, adding that if she had not stopped so quickly Mr. Sanchez's injuries could have been even worse. Mr. Sanchez was not wearing a helmet, he said.

The driver was not injured, nor was her passenger, a child.

No charges are being filed against Ms. Shookshawee, he said.

Detectives are continuing to investigate the crash, but are looking at "possible alcohol involved by the cyclist in addition to his failure to yield the right of way of motor vehicles on a county road," he said.

Ambulance personnel with the Springs Fire Department treated the bicyclist, a man whose name was not immediately released, at the scene for what looked to be a head injury and called for a Suffolk County medevac helicopter to transport him to Stony Brook University Hospital, the closest level-one trauma center.

A silver Kia heading toward East Hampton from Springs hit the bicyclist just before 4:30 p.m. in front of the newly expanded deli, at the intersection of Three Mile Harbor and Soak Hides Roads. The bicycle's mangled frame was resting on the sidewalk. The Kia had damage to its front end, particularly on the driver's side. Food, including French fries, were strewn about in front of the vehicle.

East Hampton Town police detectives closed Three Mile Harbor Road from Muir Boulevard to Abraham's Path as they investigated the crash. Police expected that portion of the road to be closed for several hours.

This article will be updated with more information as it becomes available.