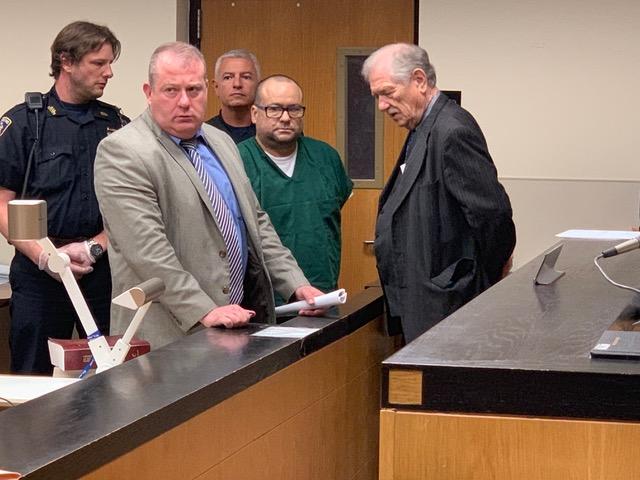 Elvin Silva-Ruiz, who is in kidney failure and receives dialysis three times a week, will be heading to a state prison after he was sentenced to four years on drug sale and conspiracy charges on Thursday.
Taylor K. Vecsey
By Taylor K. Vecsey

"I'd like to apologize to the people of Montauk," Elvin Silva-Ruiz, accused of arranging for the shipment of cocaine and oxycodone from Puerto Rico to Montauk and arrested in a major drug bust last summer, told a Suffolk County Criminal Court judge at his sentencing Thursday morning.

As part of a plea with the Suffolk County District Attorney's office, Justice Timothy P. Mazzei sentenced him to four years in prison on the top count of criminal sale of a controlled substance in the second degree, a felony, and five years of post-release supervision. A 40-year-old with serious health problems, he was also sentenced to one and a third to four years on a second-degree conspiracy charge, also a felony. The sentences will run concurrently. Since he has been held on bail since August, he will get credit for time served and likely be behind bars for another two and a half years.

Mr. Silva-Ruiz, known as Pito, had pleaded guilty about six months ago, according to Christopher C. Brocato, a Central Islip attorney. His guilty plea and allocution were sealed, however. Mr. Brocato said in court on Thursday that his client had been cooperative.

During a five-month investigation, officials used court-authorized eavesdropping and electronic surveillance as well as undercover drug buys to make a case that led to the arrest of 17 people in August 2018. Mr. Silva-Ruiz was among seven people, all from Puerto Rico, named in a 33-count indictment. The D.A.'s office said they were running the largest drug ring on the South Fork. They made as much as $100,000 in three weeks, William Nash, an assistant district attorney with District Attorney Timothy D. Sini's narcotics bureau, said in court at the time. The D.A.'s office said many of them were working seasonal jobs at Montauk eateries — sometimes selling out the back door of the kitchen — and living in places their employers provided.

Mr. Nash described Mr. SIlva-Ruiz at his arraignment in August as "a key component in the large narcotics distribution organization." He was caught on a digital recording selling half and ounce of cocaine to an undercover officer and was in charge of arranging for the shipment of cocaine and oxycodone, the D.A.'s office said.

As part of the deal, he forfeited $27,000 that was in his bank account. The D.A.'s office had also previously confiscated $20,769 in cash that he had when he was arrested in August at Kennedy Airport, where he was getting ready to board a flight to Puerto Rico to pay for more drugs. Geraldo Vargas-Munoz, 38, who was considered the kingpin in the Montauk drug ring, drove him to the airport that day, and also took a plea deal. He is serving 11 years in Downstate Correctional Facility in Fishkill, N.Y. Described by the D.A.'s office as "the largest purveyor" and "major trafficker" of cocaine and oxycodone in Montauk, he was facing 25 years to life.

"I know it was wrong," Mr. Silva-Ruiz told Justice Mazzei, through a Spanish interpreter. He also apologized to his family. "I want another opportunity to do things the right way in the future." He said he would try to live "properly" and "correctly" when he was done serving his time.

His attorney asked Justice Mazzei to ensure that Mr. Silva-Ruiz's file included a note about his client's poor health. When he was arrested, he was being treated for leukemia. He is in kidney failure, a complication of the leukemia, and receives dialysis three times a week. "He cannot go any more than 72 hours without dialysis," Mr. Brocato said and he was afraid that as his client is transferred between the Suffolk County jail, where he has been held since his arrest in August, to an upstate prison that his treatment would fall by the wayside. The judge made the note.

"He got himself tied up with some not so nice people," Mr. Brocato said after the sentencing, adding that once he got involved, he could not stop.

Mr. Brocato said that Puerto Rico is "the hub of the drug business." It is well-known, he said, that those in the drug trade say "get it to Puerto Rico," because it is United States territory and not subject to Customs inspection. The only inspection of packages leaving Puerto Rico is by the U.S. Post Office.