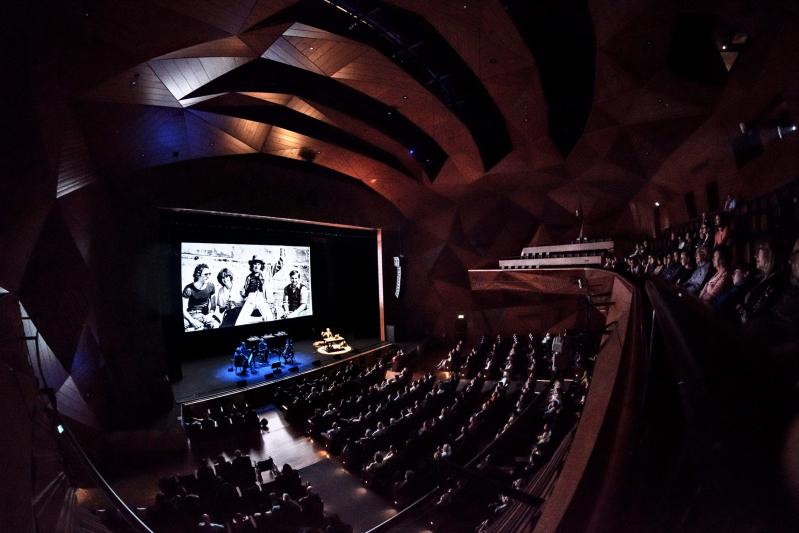 Over the past 45 years, the Kronos Quartet has built an eclectic repertoire, performing and recording works by 20th-century masters, contemporary composers, jazz legends, rock artists, and genre-defying artists such as Laurie Anderson.

Sam Green’s most recent project, “A Thousand Thoughts,” a collaboration with the group, blends live music and narration with archival footage and interviews such prominent artists as Philip Glass. It will be presented at Guild Hall on Friday, June 21, at 8 p.m., in association with the Hamptons International Film Festival.

Written and directed with Joe Bini, an award-winning film editor, the filmed portion of “A Thousand Thoughts” also includes interviews with Steve Reich, Wu Man, and Terry Riley, among others. As Mr. Green tells the story of the Kronos Quartet, the group draws from its extensive body of work, performing music by George Crumb, Aleksandra Vrebalov, and many others.

Comprising David Harrington (violin), John Sherba (violin), Hank Dutt (viola), and Sunny Yang (cello), the quartet has combined a spirit of fearless exploration with a commitment to reimagining the string quartet experience. The group has performed thousands of concerts, released more than 60 recordings, and commissioned more than 1,000 works and arrangements for string quartet.

Integral to its work is a series of long-running, in-depth relationships with many of the world’s foremost composers, as well as collaborations with performers ranging from Paul McCartney, Patti Smith, and David Bowie to Allen Ginsberg, Tom Waits, and Noam Chomsky.

Mr. Green earned a master’s degree in journalism at the University of California, Berkeley, where he studied documentary filmmaking with the award-winning director Marlon Riggs. He went on to make two feature-length films, one of which, “The Weather Underground,” received an Academy Award nomination for best documentary feature in 2004.

Six years later, he took a giant step into uncharted territory, pioneering the live documentary, a form that combines film with live performance and narration.

In a podcast released by the Houston Cinema Arts Society, Mr. Green discussed the genesis of “A Thousand Thoughts.” “Their manager got in touch with me about four years ago to make a video for their 40th anniversary concert at Carnegie Hall. I listened

to all their music and went through their archive and was very taken with them. . . . Also their careers are so interesting and varied and they’re still up for doing new things. . . . ”

“So at a certain point they asked if I would be interested in doing something longer, and I proposed rather than just a normal documentary this kind of odder form, and to their credit they were open to it. Some weird thing they probably didn’t know what it was. But we did it and it’s been fun for me at least to tour around performing, showing it.”

Mr. Green’s first live documentary, “Utopia in Four Movements,” explored the state of the utopian impulse in the 21st century. While the musician Dave Cert performs, Mr. Green narrates over images relating to the economic boom in China, an optimistic American exile in Cuba, and the establishment of a manmade language designed to end war and cultural conflict.

For “The Love Song of R. Buckminster Fuller” (2012), Yo La Tengo performs an original score while Mr. Green traces the career of the visionary architect and inventor in images and words. It premiered at San Francisco’s Museum of Modern Art as part of the San Francisco International Film Festival.

“The Measure of All Things,” which launched at the 2014 Sundance Film Festival and was loosely inspired by the “Guinness Book of Records,” weaves together a series of portraits of record-holding people, places, and things.

“Utopia in Four Movements” started as a conventional documentary, Mr. Green explained in an interview with “Extended Play.” The idea of presenting it as a live cinema piece came to him while he was editing the film. “It really was a traditional film, I mean it was an experimental film that morphed into this live event.”

While Mr. Green has no plans to abandon regular films, he remains excited by the live documentary and wants to continue to push the form, he told the interviewer. “To me, the most interesting part of the form is that the music — really big music and huge images washing over you — is a completely immersive experience. I’m trying to get as big as possible.”