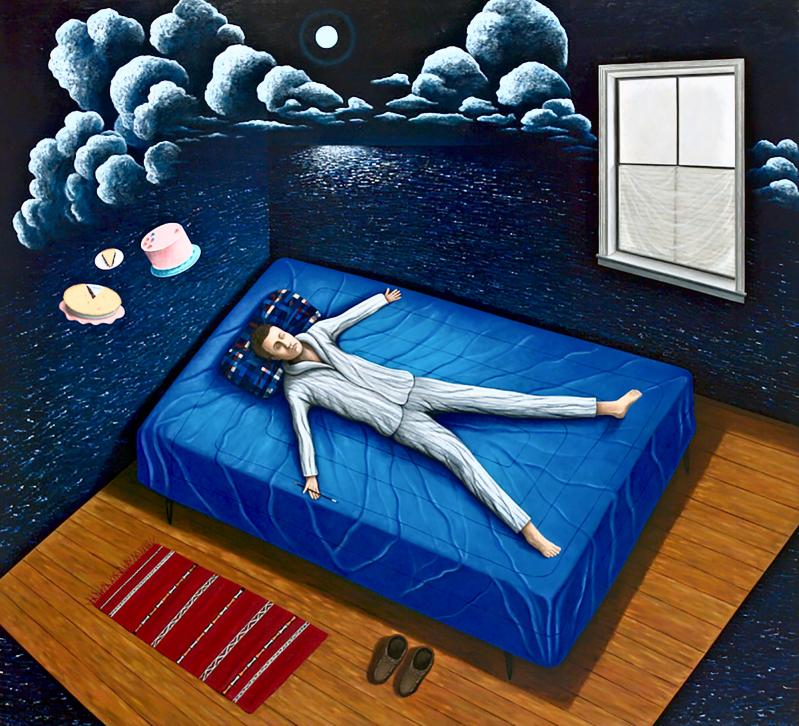 Scott Kahn’s painting “Interior” is on view at Harper’s Books in East Hampton.

Harper’s Books in East Hampton will open concurrent solo shows of paintings by Scott Kahn and Madeleine Bialke with a reception on Saturday from 6 to 8 p.m. The exhibitions will continue through July 11.

Solo shows of work by Lana Kova and Virva Hinnemo will open at Studio 11 in East Hampton with a reception on Saturday from 5 to 7 p.m. and remain on view through July 7.

Ms. Kova’s porcelain and ceramic sculptures have intricately textured surfaces and organic forms, sometimes suggested, at other times more explicit, as in her sea urchin series. While some of her forms suggest objects in the world, Ms. Hinnemo’s paintings are fundamentally about the material qualities of surface and paint.

Grain Surfboards in Amagansett will show ceramics by Ondine Karady and photographs by Richard Silver from tomorrow though June 30, with a reception set for Saturday from 5 to 8 p.m.

In addition to furniture and interior design, Ms. Karady creates ceramic objects that explore the convergence of organic forms with geometric patterns. Mr. Silver’s photographs focus on the natural world, especially its more rugged aspects, such as extreme weather or mountainous terrain.

“Boatyards,” a solo show of work by Nathan Slate Joseph, will be on view at Keyes Art in Sag Harbor from tomorrow through July 8. A reception will take place at Tait Yachts at 1A Bay Street in the village from 5 to 8 p.m. tomorrow.

For the new works, Mr. Joseph collected found material, oxidized it with natural pigment, and exposed it to the elements to produce rich saturated color and varied textures.

“Banner Day,” paintings by David Humphrey, will be at Crush Curatorial in Amagansett from Saturday through June 29, with a reception set for Saturday from 4 to 8 p.m. The paintings began as snapshots that were blown up by a sign and banner printer onto five-by-seven sheets of vinyl. Mr. Humphrey then painted on the enlarged images, which will be hung around the Crush Curatorial property as well as in the potato barn exhibition space.

An exhibition of paintings by Marc Dalessio and John Morfis will open at the Grenning Gallery in Sag Harbor with a reception on Saturday from 6:30 to 8 p.m. and continue through July 7.

Mr. Dalessio, a plein-air painter, will show recently painted scenes of Stony Brook, Amagansett, East Hampton, Indian Wells Beach, and Sag Harbor. Mr. Morfis is known for his still-life paintings of single objects, among them a buoy, a watering can, and a horseshoe crab. His recent paintings feature bolder colors and larger canvases.

The Romany Kramoris Gallery in Sag Harbor will exhibit work by John Philip Capello, Ghilia Lipman-Wulf, Muriel Hanson Falborn, and Adriana Barone from today through July 1. A reception will be held on Saturday from 5 to 6:30 p.m.

“Instamatic Karma — Through My Lens,” a show of photographs by May Pang, will open at Chase Edwards Contemporary in Bridgehampton with a reception on Saturday from 4 to 8 p.m. and continue through June 26.

Ms. Pang was hired in 1970 as a personal assistant to John Lennon and Yoko Ono and eventually had a relationship with the former Beatle. The exhibition will include her personal photographs, which were published in 2008 in the book “Instamatic Karma: Photographs of John Lennon.”

The Artists Speak series at the Art Barge on Napeague will kick off on Wednesday at 6 p.m. with a conversation between Kris Moran, an artist, designer, and set decorator, and A.S. Hamrah, a film critic and writer.

Ms. Moran has worked with the directors Barry Jenkins, Wes Anderson, and Todd Solondz, among others. Mr. Hamrah is the film critic for n+1 and the author of “The Earth Dies Streaming: Film Writing, 2002-2018.” Tickets are $20.

The Pollock-Krasner House and Study Center’s Art in Focus lecture series will conclude on Tuesday at 7 p.m. with “Lee and Me,” a talk by Ruth Appelhof, the former executive director of Guild Hall, about the summer she spent interviewing Lee Krasner, her friends, and art world luminaries. The free talk, a preview of “Lee and Me: An Intimate Portrait of Lee Krasner,” which will be published in July, will take place at the Stony Brook Southampton Library.

This year’s Artists for Haiti benefit will be held on June 22 from 5:30 to 8:30 p.m. at the East Hampton Airport. The evening will include a silent art auction organized by Folioeast, music by D.J. Giancarlo, raffle prizes, cocktails, and hors d’oeuvres.

Wings Over Haiti, which was started by Jonathan Glynn, a Sag Harbor artist, is dedicated to building schools on the earthquake-ravaged Caribbean island and providing children with two meals a day and medical attention. Its first school opened in 2010 near Port-au-Prince, and a second is under construction in Ranquitte.