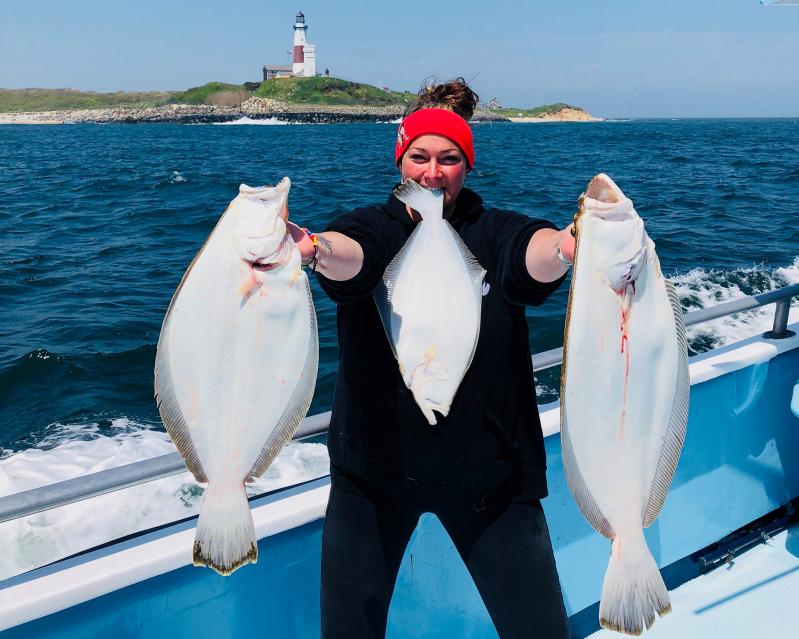 Sushi, anyone? Rebecca Vegessi-Gagnon of Copiague landed three beautiful fluke on an excursion on the Lazybones, operated by her father, Capt. Michael Vegessi.
By Jon M. Diat

Fishing is sometimes a gamble. Some days you are the hero, and the next outing you can be found sulking and wondering where the fish went. There are never any guarantees when you drop a baited hook and line. Fish markets make their livelihood this way.

For those entering a tournament, whether it be for a tiny flounder or a giant bluefin tuna nearing 1,000 pounds, the competition can be intense no matter the quarry at hand. And with that, a number of tournaments adorn the upcoming calendar for those seeking not only a tasty dinner, but a little extra cash in the pocket.

The first to take place is certainly a mouthful. It’s the inaugural Paulie’s Tackle and Toad’s One Shot striped bass surf tournament, organized under the auspices of Paul Apostolides, the owner of Paulie’s Tackle Shop in Montauk, and the local fishing hound, Gary (Toad) Stephens. For a mere $25 entry fee, anglers can weigh in a striped bass caught from the surf that must be at least 30 pounds.

However, there is a catch, no pun intended: Anglers can only weigh in one striper at Apostolides’s shop between June 1 and Thanksgiving Day weekend. If you happen to land and weigh in a 35-pound fish, but capture one later in the season that’s larger, you are out of luck. You gotta throw it back.

“It should be a lot of fun,” said Apostolides from his establishment in downtown Montauk, where anglers can fill out an application. “Casters better be confident in what they bring in for a weigh-in. They only have one shot.” Apostolides said there will be plenty of incentive for surfcasters, as $10,000 in prize money will be awarded.

“We will have 70 percent of the money go to the largest fish landed from the beach in waders,” he explained. “The other 30 percent will go to the heaviest fish in the wetsuit division.” No other monetary awards will be given out. It’s winner-take-all for each division.

Apostolides said that bait-fishing is allowed and the boundary for fishing stretches from Georgica Beach all the way eastward to Montauk Point rounding over to the north side. Sharpen your hooks, you sharpies out there.

The following weekend, the Montauk Marine Basin will hold its 49th annual shark fishing tournament on June 21 and 22, limited to no more than 150 boats. A total of $50,000 in prize money is up for grabs in several categories, with an entry fee of $1,250.

In such stated shark tournaments, any leftover flesh will be distributed to various Long Island food banks. Even the irascible and ornery Capt. Quint from the movie “Jaws” would approve of such a charitable donation.

Have children? Well, they too can get in on the action, as the Montauk Local Youth Fluke Tournament is underway and concludes on the last day of fluke season (Sept. 30). There is a nominal $5 entry fee and kids up to 16 years old can participate. The angler with the largest fish will receive a custom fishing rod courtesy of MTK Custom Rods, and a number of other prizes will be given out for second and third place. The Montauk Marine Basin is the official weigh-in station and where sign-ups are accepted.

“It’s a great way to get kids involved with fishing,” said Capt. Tim O’Rourke of Montauk Point Fly Fishing, and the coordinator of the tournament. “We started this two years ago with only six kids, and now we are already up to 30 so far this season.” Trevor Meehan currently sits at the top with a 4.84-pound flattie.

Back on the current, local fishing scene, the Memorial Day weekend brought out a large number of anglers seeking a wide variety of prey.

“Excellent catches on a number of different species,” reported Harvey Bennett at the Tackle Shop in Amagansett. “Big porgies are hungry and on the chew at Cherry Harbor and Fort Pond Bay. Fluke fishing is getting better in a number of locations, including Accabonac and over at Napeague.”

As for striped bass, Bennett says they are thick on the bayside and near the entrance to Accabonac Harbor. “Lots of fish in the 20-to-30-inch range with rubber baits being the hot lure,” he said. “And bluefish are roaming around as well.”

An avid fan of the Indianapolis 500 car race, Bennett closed up his establishment early on Sunday to enjoy the famed event from the comfort of his living room. “I love watching any kind of car race, but the Indy 500 is special,” he said, as Simon Pagenaud of France captured the checkered flag. Bennett was not happy with the end result.

“He drives for Team Penske, which I can’t stand,” he said, referring to the team owner, Roger Penske, who captured his 18th victory at the 2.5-mile oval track known as the Brickyard. “They have all the money and resources. I pull for the guys who don’t have that exposure.”

Sebastian Gorgone, who repairs cars and runs Mrs. Sam’s Bait and Tackle in East Hampton, was enthused about the big turnout of anglers on the holiday weekend. “The weather was finally nice and it brought a ton of people to the shop and the water,” he said. “And the fishing was good as well.”

Gorgone said that huge porgies can be found in Cherry Harbor and that some fluke were caught near the fish factory on Napeague. “Also, people have been doing well on bluefish and stripers in Three Mile Harbor.” The veteran shopkeeper suggests using small diamond jigs for the best success.

“Fishing has been really good,” said Ken Morse, the proprietor of Tight Lines Tackle in Sag Harbor. “Seems like a slug of sand eels have come into the Sag Harbor area and the fluke fishing has been good, with fish up to nine pounds landed.” Morse recommends the area between Cedar Point and Mashomack as the hot spot.

“Porgy fishing has been excellent over at Jessup’s and the striped bass fishing remains solid,” he added. “The back coves are also holding a ton of bass and it makes for excellent light-tackle fishing.”

“We had some really good fluke fishing over the holiday weekend,” said Dave Reutershan at Westlake Marina in Montauk. “There are a lot of shorts, but some fish up to 13 pounds were landed coming from the south side.”

To prove the point, 10-year-old Sarah Szewc caught a 10-pounder on her grandfather’s boat. “It was great to see the smile on her face,” he recalled. “It was a beauty of a fish.”

Reutershan said that striped bass fishing continues to be on the upswing, with more keepers being landed. “And we’ve had a really nice showing of cocktail-sized bluefish, too,” he added.

“We had a nice eight-pound fluke to win the pool on Saturday,” said Kathy Vegessi of the Lazy Bones in Montauk. “The action has been a bit inconsistent at times, but people are having a great time.”

While the calendar says it’s still spring, the weather finally gave everyone a chance to enjoy early summer.

We welcome your fishing tips, observations, and photographs at

[email protected]. You can find the “On the Water” column on Twitter at @ehstarfishing.