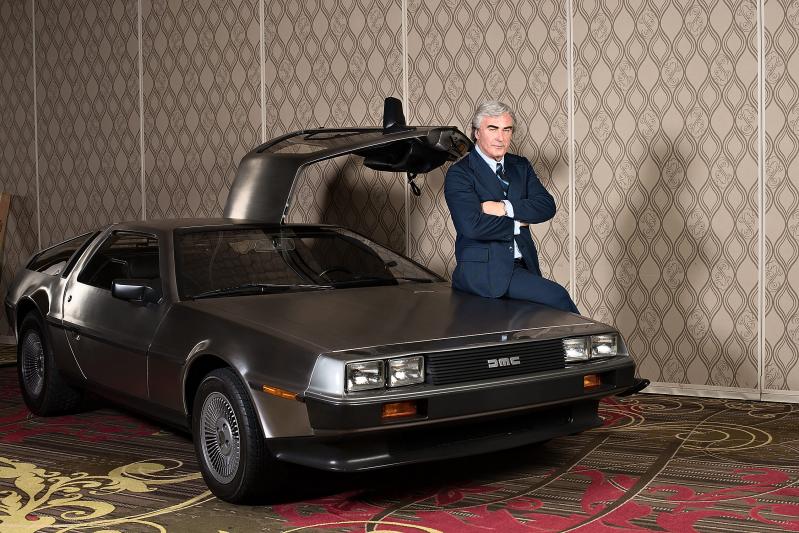 Alec Baldwin in character as John DeLorean, with the auto designer and manufacturer’s DeLorean sports car.
By Jennifer Landes

One of the most captivating stories that emerged from the excesses of the 1970s and ’80s was that of John DeLorean. A modern Icarus morality play, it demonstrated what can happen when industrial visionaries fly too close to the sun.

It was such a compelling yarn, complete with its own relics — the famed DeLorean sport cars with gull-wing doors and a stainless-steel body, made famous in the film “Back to the Future” — that numerous studios had an “untitled John DeLorean project” languishing on their development lists at one time.

A recent dramatization of events leading up to DeLorean’s cocaine bust was screened at the Toronto Film Festival last year to negative reviews and has not been released. There have also been two documentaries, including one in 1981 about the making of his car by Sag Harbor’s D.A. Pennebaker and Chris Hegedus and the other in 2014.

Now, the filmmakers Don Argott and Sheena M. Joyce have made “Framing John DeLorean,” a more complete film about the man and his world that premiered at the Tribeca Film Festival in April. (The filmmakers’ “The Art of the Steal,” about the move of the Barnes Collection of art to Philadelphia from its original home in a nearby suburb, was screened in East Hampton in 2010.)

“Framing John DeLorean” will be screened by the Hamptons International Film Festival on June 8 at Guild Hall. Distributed by Sundance Selects, it will open in limited release in theaters and video on demand on Friday, June 7.

The film was made in the documentary and narrative hybrid genre, similar to “Valley of the Boom,” a National Geographic Channel series about the beginnings of the internet. It uses interviews, old footage, and new scripted recreations and interpretations of scenes from DeLorean’s life to trace his time at General Motors, the founding of his own company in 1973, and the ultimate collapse of both his company and his vision.

Playing the subject in these recreations is Alec Baldwin, who knew the filmmakers from their earlier film’s screening. The actor was actually approached by DeLorean, who died in 2005, to play him for one of the earlier unrealized projects. In the production notes, Mr. Baldwin stated that the recreations were important to DeLorean’s story because the “existing footage of DeLorean, related to his most celebrated misadventures, is weak.” The surveillance footage is from a poor angle and is grainy. “The story pretty much begs for re-enactment to bring it to another level.”

Also starring in the narrative scenes are Josh Charles (who has played on the Artists team in East Hampton’s Artists and Writers Softball Game) as a longtime colleague of DeLorean’s and Morena Baccarin, who plays Cristina Ferrare, DeLorean’s third wife, married to him while he started his own company and through his arrest and trial.

The directors follow DeLorean’s rise through the ranks of General Motors, which was fueled by his transformation of the Pontiac division from a sleepy brand in search of an identity to one that created the GTO “muscle car,” the Firebird sports car, and the Grand Prix luxury car. With master’s degrees in business and engineering, at 40 DeLorean became the youngest division head in General Motors history and went on to run Chevrolet. In 1972, he was named vice president for all of General Motors, and then left in 1973 to start his own company.

They also note his predilection for moving in glamorous social circles and his numerous wives including Kelly Harmon, an actress, and Ms. Ferrare, a model, actress, and talk show host.

DeLorean was apparently vain and had plastic surgery to give him a strong, emphasized jawline. Mr. Baldwin was concerned he would not be able to pull off the look. He suggested bringing in the Emmy Award-winning “Saturday Night Live” hair and makeup team of Jodi Mancuso and Louis Zakarian, who are responsible for transforming him into Donald Trump for the show. Given the limited budget, the project “required efficiency regarding hair and makeup. We could have fussed for hours. But Jodi and Louis gave us a good look considering DeLorean was taller and leaner than I am,” he said.

Early on in the film, Mr. Baldwin is seen being prepped. His wife, Hilaria Baldwin, appears on his phone via FaceTime and they chat about what he is doing. It’s the kind of meta moment that becomes familiar as the film progresses. Breaking the fourth wall is a signature move of the hybrid genre, which appears to work best when it is self-consciously aware of the awkwardness of its transitions between narrative scene and talking head.

According to the directors, “we thought filming the behind-the-scenes of the narrative would give us an interesting perspective.” The scenes where discussions with the actors about their characters occur “allow us to dig deeper into the subject with our cast, and further blur the line between fact and fiction.”

The film will be followed by a conversation with the directors along with Mr. Baldwin, who is a HIFF co-chairman, and David Nugent, HIFF’s artistic director. The screening begins at 8 p.m. and costs $25, $23 for members of HIFF and Guild Hall.