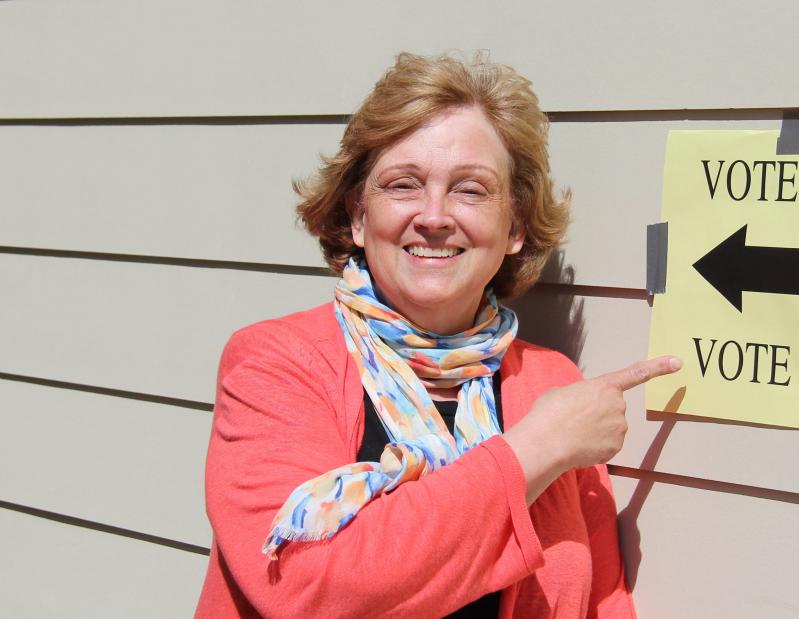 Barbara Borsack, seen before casting her ballot in Tuesday’s school budget vote and board elections, is hoping voters will give her the nod in the 2020 race for East Hampton Village mayor.
By Jamie Bufalino

Ms. Borsack, a village board member for 19 years and a deputy mayor for some of them, announced her candidacy on Friday.

“My main motivation is I love this place,” she said. “That’s why I got on the board to begin with. I’ve lived my whole life here, my family’s been here for generations, right in the village, and when you have deep roots somewhere, you really want to dig in and keep things as palatable as possible.”

She is running as a member of the Elms Party with Richard Lawler, a fellow board member, and Ray Harden, the vice chairman of the village’s zoning board of appeals, who is running for village trustee for the first time.

It will not be her first run for mayor. In 1992 she ran against Paul F. Rickenbach Jr., who won the election and has served as mayor ever since. He announced last month that he would not seek another four-year term.

That race had been her way to proclaim a desire to participate in local government, she said on Monday. “I really wanted to get involved in the village, and I didn’t know how to let people know, so that was kind of my shot across the bow.”

She went on to serve on the zoning board of appeals, and was appointed chairwoman of the committee that formulated the village’s comprehensive plan. She has also been a member of the village’s volunteer ambulance association for nearly 30 years.

The Elms Party platform, as stated on its website, focuses on three main objectives for the village: protecting the environment, the historical character, and quality of life.

“Those are the things that you hear from residents all the time,” said Ms. Borsack, adding that she finds it amusing when people refer to the village as “the village of no,” a reference to its myriad code restrictions such as the prohibition against live music in restaurants.

“The village is the way it is because that’s the way the residents want it,” she said. “We listen to the residents. People talk to me in the I.G.A. and in the CVS. People are not shy about saying, ‘Yeah, I’m having a problem at my house, the neighbors are renting their house every weekend and there’s a lot of noise.’ ”

Ms. Borsack had been planning to declare her candidacy later this year, but after Jerry Larsen, a former village police chief, announced his run for mayor last month, she adjusted the schedule.

“I think it’s a little early, but at the same time, when someone else is out there getting all the publicity, you kind of have to step in,” she said.

Mr. Larsen had said he was inspired to run for mayor because he felt the village board has been “stuck in a rut” and is not offering innovative ideas. Ms. Borsack disagrees.

“We were the first ones to do the plastic bag ban, and then the town followed suit,” she said. “And the same with Styrofoam.”

Ms. Borsack said she is proud of the job the village board has been doing.

“I think the village is well run and very fiscally responsible,” she said. “We’re very careful with people’s tax dollars.”

Still, she’s not opposed to change. Although she played a major role in developing the comprehensive plan, she favors revising it to meet the village’s current needs. “In fact, I suggested a few years ago that it would be a good idea to update it,” she said.

Her opponent has suggested that a term limit of 12 years is needed for village officials. “I believe we already have term limits: They’re called elections,” Ms. Borsack said. “If people are not happy, they should be voting you out of office. If the people don’t want me in office, I don’t want to be in office. I really, truly believe that.”

She and her running mates, she said, are people who want to do the best for the village. “You want people in office who you think have a certain amount of integrity, and not in it for reasons of personal gain. They really have to have the villagers’ best interest at heart.”

The mayoral campaign has begun unusually early, more than a year ahead of the election, and Ms. Borsack said she hopes the extra time isn’t filled with unsavory politicking.

“I’m not a down and dirty person,” she said. “I’m not going to get down in the mud with anybody. The village voters know who I am. They know what I stand for. They know what I’ve done. They can make the choice. I think they’re smart enough.”