Did you live here in the '70s or '80s? And do you remember a white-haired man who used to walk Montauk Highway — in snow and sleet, rain and shine? We dug deep to uncover the real man behind a local urban legend 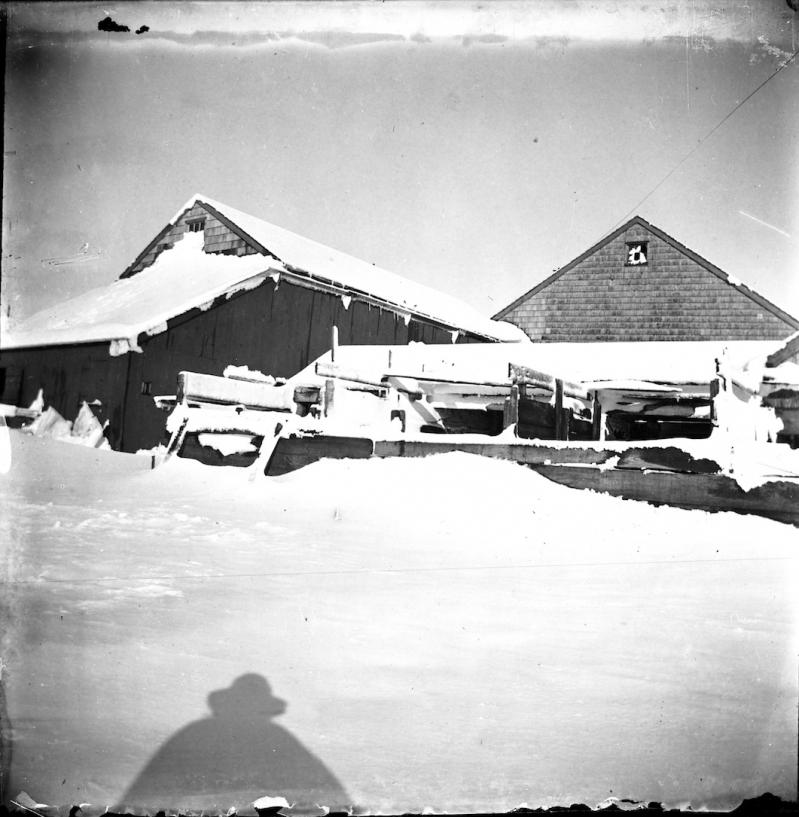 Ask anyone who was in and around Bridgehampton in the 1970s or early 1980s about a man named Snow, and they will know exactly who you’re talking about. Snow was an older gentleman, African-American, with a shock of white hair who plied a constant course up and down Montauk Highway on foot. In later years, he carried a walking stick. In winter, he wore a big overcoat. He was a local character whose wafture of the hand — in greeting or dismissal — became legendary.

Locals of all stripes remember this sinewy figure walking mainly on the outskirts of Bridgehampton, and on the highway between East Hampton and Water Mill, but also in Sag Harbor and as far east as Amagansett. Forty years ago, the fields on either side of the highway were filled with endless rows of potatoes, a low-lying crop, and on windy days clouds of dust, mingled with fragrant potato-beetle insecticide, would roll out from the fields, and out of those clouds would walk Snow.

Some who were schoolkids in those years say they counted themselves lucky when they caught a glimpse of Snow. “On the bus to and from East Hampton to the Hampton Day School, we all used to stretch our necks at the underpass in order to see him,” says Rossa Cole, a photographer and artist who remembers looking for Snow as the bus passed under the railroad trestle at Butter Lane. “It became a thing that it was good luck to get a glance of him.”

David Schleicher remembers seeing Snow regularly as he and his parents made their way from their home in Noyac to the Bridgehampton ocean beach. “I have fond memories of him wandering Scuttlehole Road and Mitchell Lane in Bridgehampton,” Schleicher says. “He was just a great wanderer, walking to find some meaning in life, I guess. He always had a great smile and a charming manner.” >

Snow was a figure of folklore.

He was also the subject of rumors rampant and sometimes scurrilous. Cole recalls someone once having told him that Snow’s “hair was white because he saw his son killed by a train, and that’s why he always walked around back there.”

André Fecteau, a chef who now lives in Austin, Tex., says that he and his school chums “surmised that [Snow] and the bottle lady who hung out near Cavagnaro’s were an item.” (Cavagnaro’s Bar and Grill, now also long gone, stood on Newtown Lane, near the Long Island Rail Road station in East Hampton.)

“He had a woman or wife who cooked for people, or baked pies,” recalls a long-time resident of Bridgehampton who didn’t want her name used in print. “ ‘Mrs. Snow’ lived in a shack to the east of McCoy Fuel. . . . When she died, I gather, he started his wanderings.”

David Rattray, the editor of The Star, recalled Snow in an editorial column in 2016: “When I was young we would keep an eye out for Snow,” he wrote. “I remember listening to WLNG one night during a blizzard. A caller phoned the radio station to say that it ‘looked like Snow!’ was on the street. Not understanding, the host went along: ‘Yes, it sure does look like snow.’ ‘No, I mean, Snow! The man!’ she said.”

East spent a few weeks trying to figure out who, exactly, was Snow. And — with the help of Julie Greene, Southampton Town archivist and curator at the Bridgehampton Museum, as well as Eric Wright of the Southampton Cemetery — we found out.

Our first lead was a friend of a friend who thought Snow might have worked on the potato farms that used to blanket Sagaponack and Bridgehampton. As it turns out, he did.

We were not surprised to learn this, as many of Bridgehampton’s African-American residents were drawn north at midcentury by the humble promise of farm work.

One farmer from Sagaponack we spoke with remembered Snow well — although he also didn’t want to be named in this story, either. This farmer says Snow was always willing to take on the hardest work, to accept the worst jobs — like shoveling potatoes into the grader, a job so arduous it had a special and unforgettably evocative name: working the banjo.

“It is a very hard job,” this farmer says, “bent over lifting maybe 10 pounds of spuds repetitively maybe more than 10 hours a day. Mind you, this was 50 years ago.” Machines do this kind of work nowadays, in part because it is too hard to find men who will take on that kind of labor.

Snow was unbreakable. “He was a great worker, really conscientious. Work all day, never break a sweat,” the farmer says. “He reminded me of Charlie Chaplin, moving along, bent over.”

The farmer also remembers that people “mistreated him like crazy.”

Someone else from Bridgehampton — again, who didn’t want to be named in this story, for reasons that immediately became clear — remembers the neighborhood kids playing tricks on Snow when she was a youngster: “They would hide in the bushes and say in ghost voices , ‘Snoooowwww, this is God speaking!’ It was just mean.”

In the Sagaponack farmer’s memory, the nickname “Snow” was not a kind one: He believes that people called him Snow because he was so dark-skinned: Snow White.

Others have different explanations for the nickname. Memory is fickle.

Paul Davis is a retired phys-ed teacher who now lives in Jamesport. His father was a migrant farm worker who came north to Long Island from Southampton County, Va. to work the potato fields.

Davis remembers Snow as “Snowball” and figures maybe this had something to do with his laboring at the potato graders, sorting the good from the bad, in the wintertime: “Number one, here . . .  number two, there. . . . Dusty. Cold.”

“A lot of people are invisible on the South Fork,” Davis says, “and if it wasn’t for the contrast of dark skin and white hair, they might’ve never noticed him.”

Davis also remembers Snow taking in a relative who was down on his luck.

Bridgehampton’s African-American community was tight-knit in those days, living mainly along the Bridgehampton–Sag Harbor Turnpike and Huntington Crossway. Families who came north from Virginia and weren’t genetically related sometimes came to think of one another as “cousins,” because they shared a cultural heritage from back home: The way they cooked and spoke, the places they remembered.

Snow was born Clinton Smith in Southampton County, Virginia, on Christmas Day in 1904.

Southampton County sits just above North Carolina, and Drewryville — 67 miles south of Richmond, 64 miles west of the Atlantic Ocean at Norfolk — was Snow’s hometown. The entire area was, in the 18th century, a plantation owned by a family named Drewry. >

Southampton County is rural, but it holds a not-insignificant place in American history. It is where Dred Scott was born. It is also where you will find Jerusalem, the place where Nat Turner was hanged in 1831 for sparking the most prolonged enslaved-people’s revolt in American history. If you read the history of Nat Turner’s Rebellion — which some consider a crucial spark of the Civil War — you will learn about the villages and indigenous people, the Nottoways, whom Snow and his family would have known well. (Snow’s own grandmother had the last name of Turner, although — since enslaved people were frequently given the patronymic of their enslavers — it is impossible to speculate on a genetic relationship to the revolutionary.)

We do know that Clinton Smith had been called “Snow” since he was a very young child: He appears in the 1910 census of Drewryville as “Snow Smith, age 6.” His brothers were Vernon, Newitt, and Booker T., and he had a sister named Johnnie. Their parents, Sam and Stella Smith, were farmers who owned their own place in an area surrounded by lumber camps.

The Smiths moved to a rented house at 301 Lumber Lane in Bridgehampton around 1930, at the beginning of the Depression. Their neighbors were laborers and potato farmers from Poland, Lithuania, the Free Irish State, and England. Next door was a cabinetmaker named Sidney Sutton and his wife, Margaret, who came from England in 1926 and were affluent enough to own a radio set.

The modest houses on Lumber Lane would have been just to the right over the train tracks as you’re heading north toward Scuttlehole Road. The area around Narrow Lane and between Lumber Lane and the Sag Harbor Turnpike was where the migrant-farm-worker camps were.

All of this we know from census records.

By 1940, Sam and Stella Smith had moved back to Drewryville, but Snow stayed and was living on Town Line Road in Sagaponack in a rented house with Lee Darden from Emporia, Va. Snow had worked 60 hours as a farm laborer the week before the census.

If you walk down Town Line Road today, it is almost impossible to square the landscape with what it must have been like then. Thirty-foot-tall privet and spruce line the entirety of the road, masking the multimillion-dollar houses behind them. In the 1940s, it would have been almost like a prairie: no trees, and miles and miles of cultivated potato-farming land. Just the sky, windswept dust, and the unmistakable smell of growing and rotting potatoes. You could see, and hear, the ocean.

Snow registered for the draft in 1942, and his draft card records his height as 5-foot-4 and his weight as 130 pounds. His mother, Stella, is listed as the “Person Who Will Always Know Your Address.”

As some point in the 1950s, Snow had a son who went to the Sagaponack School.

At some point in the 1970s, he became known for his tireless walking.

Marion Darden, who lives in Water Mill, remembers Snow only slightly, but her family was from Southampton County, too, and her parents and Snow would have known the same people.

Darden was born at Southampton Hospital in 1929. When she was young she would go over to Town Line to ride horses on her uncle Lloyd Turner’s farm. “I’m 90,” she says, “so I don’t remember much.” She is surprised to learn Snow’s real first name. “Clinton?” she says. “I never knew.”

Someone else from the community remembers seeing one of Snow’s friends looking for him in a blizzard in the late 1970s or early ’80s. The searcher was afraid he was caught in a snowdrift.

Snow died of cancer in October 1988 at the Suffolk County Infirmary in Yaphank. Earlier that year, someone had reserved a plot for him at the Southampton Cemetery. The plot cost $150; perpetual care, $200. Someone who cared about him also bought the marker, and paid for his burial. An obituary that appeared in The Star names his survivors: his son, his brothers, Vernon and Booker T., and seven nieces and nephews in Virginia and Springs. He was buried in a pine box in Southampton Cemetery, with a marker that reads 1904–1988. His name is there, and at the top, in quotes: “Snow.”  •

At top: A never-before-published glass-plate image of East Hampton after a snowstorm, sometime around the turn of the 20th century. East Hampton Star archive.