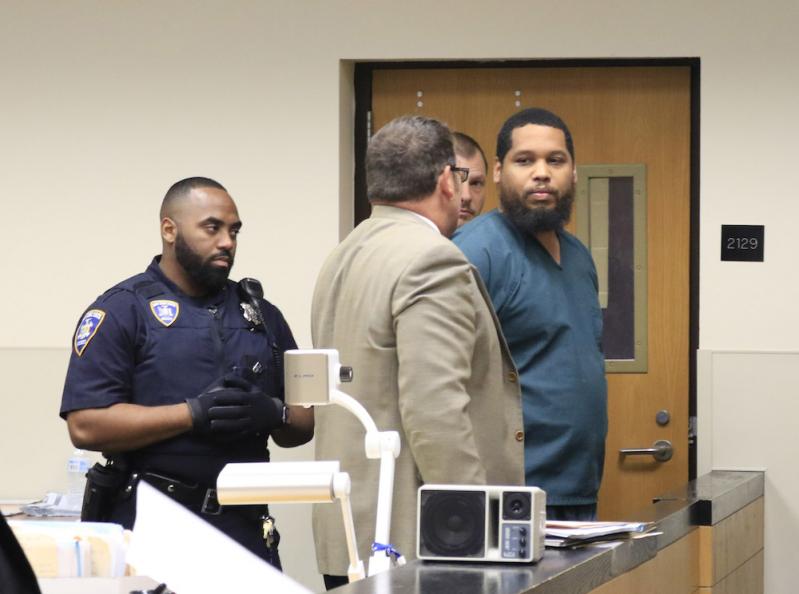 Ryan Kellis at his arraignment in Riverhead Thursday; he has been charged as a major trafficker in a drug ring that operated on or near the Shinnecock Reservation in Southampton.
T.E. McMorrow, Pool Photo
By Taylor K. Vecsey

Four men have been indicted on charges of operating as major drug traffickers, a top felony offense, in the alleged drug ring that the Suffolk County District Attorney's office said last month was responsible for distributing more than $1 million worth of heroin on or near the Shinnecock Indian Reservation.

Ryan Kellis, Justin Eleazer, Benjamin Diaz, and William Bess were named at the top of a 67-count indictment handed down by a grand jury on Monday. They each face 25 years to life in prison if convicted of the major trafficker charge, which is also known as the "king pin statute." They are accused of possessing $75,000 or more in narcotics, with the intent to sell the drugs, on one or more occasions between March 29 and Sept. 29.

In total, 26 people were named in the indictment, most of whom had been arrested on Oct. 24. Several of them were arraigned under the indictment before Suffolk County Criminal Court Judge Timothy Mazzei in Riverhead on Thursday. All of those arraigned pleaded not guilty.

Mr. Kellis, a 32-year-old also known as Noodles, and Mr. Eleazer, a 29-year-old who goes by Hood, allegedly worked with members of the Shinnecock Reservations and other Southampton-area residents to distribute heroin, often cut with the deadly opioid, fentanyl, the D.A.'s office has said. Mr. Diaz, a 47-year-old from the Bronx, and William I. Bess III, 35, of Southampton were also charged as major traffickers.

Through the use of undercover officers, informants, and wiretapping, investigators found that each month the drug ring was selling roughly 250 grams of heroin, which has a street value of $83,000, and 200 grams of cocaine, worth $33,000, the D.A.'s office said last month.

Mr. Kellis, Mr. Eleazer, and Mr. Bess are being held on $1 million bond or $500,00 cash bail, though Ryan Hunter, the assistant district attorney handling the case, asked for double that amount. Judge Mazzei ordered that any bail posted is subjected to a bail source hearing to determine if the money being used was legally obtained. Mr. Diaz's arraignment was postponed until Nov. 13.

Anthony Scheller of Central Islip, whom Mr. Kellis hired, told Judge Mazzei that his client has strong ties to the community. He said he is a Shinnecock Nation member who lives on the reservation with his girlfriend and three children in a house he has owned for three years, next to his parents, and that he graduated from Southampton High School. "There is a lot of evidence to go through," Mr. Scheller said, adding that they will try to show that his client never possessed $75,000 worth of narcotics.

An attorney for Mr. Bess, who is known as Bop and Flaco, also made an argument for lower bail, saying that he has two children and parents to care for and that he works at a smoke shop on the reservation. John Loturco of Huntington said his client's conviction was for a non-violent felony and that he has no warrant history, before asking for $100,000 cash or $250,000 bond. "I'm not going to go that low," Judge Mazzei said before setting bail at $1 million bond or $500,000 cash.

Mr. Diaz and Kenneth Rivero, 34, of Flanders were identified as Mr. Kellis's and Mr. Eleazer's suppliers.

The assistant district attorney told Judge Mazzei that Trevor Hardin, 29, lived in Mr. Rivero's stash house and that the assault weapon, for which he is also charged, was found in his bedroom. Investigators also found "felony weight" heroin and packaging materials such as gelatin capsules, glassine envelopes, and vials, as well as digital scales in the home.

His attorney, Richard Stafford of Bohemia, contends that the weapon, which he referred to as a rifle, belongs to Mr. Rivera. In making a bail argument, Mr. Stafford noted that his client is not charged with conspiracy, unlike most of the defendants. He claims that the only reason police connected his client to the house was because he phoned police after a bust in August looking for a guitar he said he left there. Mr. Hardin, who reportedly only has a one prior misdemeanor on his record, had been living in Coram at the time of his arrest.

Frank Taylor, a 59-year-old lifetime resident of the reservation, had been charged with second-degree conspiracy, but was indicted on a lesser fourth-degree conspiracy charge and two misdemeanor drug charges. He was said to be a reseller for Mr. Bess. His attorney, Scott B. Zerner of New York City, said his client has a substance abuse problem. Bail was set at $10,000 bond or $5,000 cash.

Among those charged with a single count of conspiracy in the second degree, was Walter Mims, 33, of Flanders, who, according to the indictment, met with Mr. Kellis on April 26 "for the purpose of getting money to purchase a quantity of a controlled substance."

His attorney, Philip Russo of Islandia, was the first among several attorneys who made a case for a lower bail because in 55 days bail laws in New York change, making lower bail "virtually mandatory," Mr. Russo urged Judge Mazzei to release his client on his own recognizance on such a charge, but Judge Mazzei ordered him held on $25,000 bond or $10,000 cash.

John X. Tracy, a 25-year-old from East Hampton, has been free on $100,000 cash bail since his arrest. His parents had to stipulate to the judge that they wanted the bail to be carried over to the second-degree conspiracy charge brought against their son under the new indictment.

Others charged under the indictment with second-degree conspiracy are:

• Richard Weeks, identified as a Shinnecock and former security guard for the nation who is out on disability, was brought in by Southampton Village police in handcuffs on Thursday morning. Mr. Hunter, the A.D.A., said Mr. Weaks was "a runner" for Mr. Eleazer. Lane M. Bubka, his attorney, made a plea for him to be released on a low bail because he has a 31-year-old son with Down syndrome and is his primary caregiver while his wife is in a rehab facility.

• Edward Gumbs, 57, of Southampton allegedly drove Mr. Eleazer to meet with Mr. Diaz on June. 20, "for the purpose of purchasing" drugs, according to the indictment. The A.D.A. said he was a prior violent felony offender. His attorney, John Halverson, identified him as a Shinnecock member with multiple businesses, including a taxi and delivery service. Judge Mazzei set bail at $5,000 cash or $10,000 bond.

• Scott Michael Hornstein, a lifelong Suffolk County resident known as General, was called a "reseller of narcotics for Kellis and Eleazer." Bail was set at $10,000 cash or $25,000 bond.

• Matthew Manzella, a 30-year-old Hampton Bays resident, will be arraigned on Nov. 13.

• The prosecutor also described Derrick Quinn, 49, of Southampton as a "runner for Eleazer." He faces eight and a third to 25 years in prison. The indictment said Mr. Quinn, known as Dolph, sold drugs to Mr. Halek on May. 1. His attorney, Christopher C. Brocato, said he is a self-employed mechanic whose children were in court to support him. Bail was also set at $10,000 cash or $25,000 bond.

• Valton Reddick, a 51-year-old from the Shinnecock Nation known as Earl, was described by his attorney as an Army veteran who served in Iraq in the 1990s and is receiving disability benefits. Judge Mazzei set bail at $5,000 cash or $15,000 bond.

• Nichole Rosado, 29, of Southampton, who simply listed in the indictment as paying Mr. Rivero for drugs in May, will be arraigned on Nov. 13.

• Known as Redman, Richard Short, 50, of Southampton was allegedly reselling for Mr. Eleazer. His attorney said he was a Lyft driver and a restaurant worker who bought, not sold drugs, and has no connection to any overall conspiracy. Bail was set at $20,000 bond or $10,000 cash.

Still to be arraigned is Gary Elfont on three felony and two misdemeanor drug-related charges, as well as two other, unnamed people.