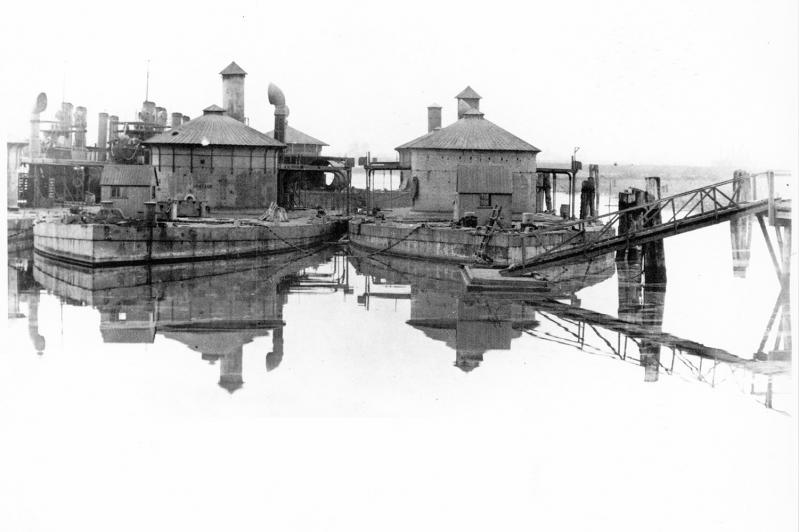 This photo shows the U.S.S. Montauk (at left) alongside the U.S.S. Lehigh docked in Philadelphia in the League Island Navy Yard in 1902.

The Montauk was a Civil War-era ironclad, designed and built by John Ericsson at the Continental Iron Works in Greenpoint, Brooklyn, for the Union Navy in 1862. Ironclads were steam-propelled warships that were covered in iron or steel armor plates. Unlike previous warships built from wood, ironclads withstood explosive shells, allowing for close-range bombardments of harbors and forts.

During the Civil War period, isolated Montauk had a small population, and it is speculated that the Montauk Lighthouse (1796) inspired this ironclad’s name. The Lighthouse provided a familiar beacon for many sailors, and Southern blockade runners needed to avoid lighthouses to escape detection.

The Montauk departed from New York for South Carolina to join the other ships of the Atlantic Blockading Squad­ron on Dec. 24, 1862, under the command of John L. Worden. On her way to South Carolina, the Montauk stopped in Washington, D.C., where President Abraham Lincoln toured it, and expressed appreciation for the new technology on board the ship.

The Montauk aided in the attacks on Fort McAllister in Georgia and Fort Wagner in Charleston. She later patrolled waters in North Carolina. The Montauk also destroyed the Confederate Navy’s steamer the C.S.S. Nashville, an incident that received coverage in local newspapers.

When her sister ship, the U.S.S. Monitor, sank in a storm as she was returning to New York, the Montauk survived the storm intact. In 1865, the Montauk serv­ed as the site for the autopsy of Lincoln’s assassin, John Wilkes Booth, who was shot and killed when the authorities came to arrest him.

Later that year, the United States Navy decommissioned the U.S.S. Montauk, sending her to Philadelphia, where she remained until being sold for scrap in 1904.