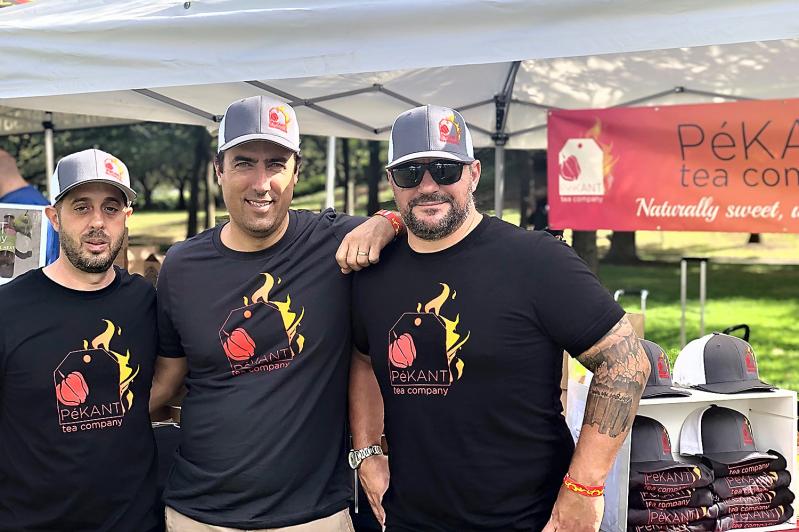 The team behind Pekant Tea — Mike Romano, left, Mike Circosta, center, and J.J. Villani — are hoping to capture a $50,000 prize in the Riptide: Sink or Swim start-up competition to help take their spicy beverage to a broader market.
Maya Roseval
By Jamie Bufalino

Several East End entrepreneurs will vie for a $50,000 investment in their businesses on Saturday in the final round of a local “Shark Tank”-like venture competition.

The annual contest, called Riptide: Sink or Swim, was launched in 2017 by I-Hamptons, a company that provides resources for start-up businesses.

Applicants are asked to submit pitches for products focused on health and wellness, food, drink, and hospitality, media and technology, or retail and consumer products.

This year, 46 businesses applied, and 23 made it to the semifinal round, according to Ashley Heather, the founder of I-Hamptons and also of the co-working space the Spur. The semifinalists were asked to submit video pitches, which were posted online, and the public voted for their favorites. The five highest vote-getters have moved on to the final round. They will each give an in-person presentation to judges and an audience at the Southampton Arts Center at 5 p.m. on Saturday.

“This year we saw a threefold increase in submissions over last year, and almost 6,000 votes were cast,” Mr. Heather said. “That tells me we are onto something. We expect some of these businesses will become regional or national.”

Among the finalists are Elias Van Sickle and Collin Kavanaugh, who have been friends since childhood, when they lived on the same street in Springs. The business partners, who are big surfers and beachgoers, are pitching Montauk Mud, an environmentally friendly sunscreen. Unlike most sunscreens, said Mr. Van Sickle, the product they’ve developed is made without chemicals such as oxybenzone, which has been found to harm coral reefs and marine life, and which may affect the human endocrine system.

“We’re seeing a big shift away from people using chemicals that are bad for us and the environment,” he said. That means, said Mr. Kavanaugh, “the sunscreen market is ready for disruption.”

They are developing sales channels and raising the profile of Montauk Mud in coastal and outdoor-oriented communities around the country. Hawaii and Key West have recently passed laws that would ban the sale of sunscreens that contain chemicals like oxybenzone, they said, so the need for an alternative like Montauk Mud is growing.

Alayah Hewie, whose late grandmother, Rena Hewie Stoutt, owned the former Jamaica Specialties grocery store on North Main Street in East Hampton, will present her food business, Rena’s Dream Patties, at the finals. Named in honor of her grandmother, the patties are Jamaican street food, an iteration of the Cornish pasty, which Ms. Hewie makes with beef, curry chicken, spinach, and cheese (the mainstays), as well as seasonal ingredients like sweet potatoes and callaloo.

“The most complicated but rewarding part is making the pastry,” said Ms. Hewie. “I’ve been posting the patties on Instagram, and people keep trying to order them,” she said. “But we’re not there yet.” If she wins the prize money, she said, she would use it to ramp up wholesale production, launch a website, and make the patties available in local food and coffee shops.

Earlier this year, Charity Joy Robinson of Sag Harbor started making Kombat-cha, her take on kombucha, the fermented probiotic beverage, because she hated the vinegary taste of other brands. Kombat-cha is now sold in nine local shops, including Provisions and the Cavaniola gourmet store at Amagansett Square, she said. It has also earned Ms. Robinson, and Romi Sloan, her business partner, a slot in the Riptide finals. In addition to being able to purchase more glass bottles, caps, and labels, the $50,000 would allow them to buy a refrigerated van to use for deliveries, said Ms. Robinson. They would also buy a machine that could automatically fill bottles. Right now, they often have to be topped off by hand.

At Saturday’s presentation, Ms. Robinson said, she plans to bring humor and music to her pitch. “My sister and I came up with a jingle for Kombat-cha,” she said. “I think when you present your business, you should make it relatable to everybody in the audience.”

The bright idea that brought Nate Burns, an East Quogue resident and a spray technician for a pest control company, to the Riptide finals is a device called the Tick Ball. “This is a user-friendly, low-impact way to kill ticks,” said Mr. Burns, who is in the process of registering the product with the federal Environmental Protection Agency and the New York State Department of Environmental Conservation.

The biode­gradable ball is made of molded pulp, and enclosed within it is a wad of cotton that has been treated with the insecticide permethrin. As Mr. Burns said in his video pitch, the balls are designed to be tossed into wooded areas of a yard where mice, which are the main transmitters of Lyme disease and major carriers of ticks, will encounter them. The mice will extract the cotton from the ball and take it back to their nests, he said.

The insecticide kills ticks, but is not harmful to the mice. It is also safe for humans and pets. Mr. Burns said he has two patents on the product, one for its design, and another for its use.

The fifth start-up business in the running for the prize is the Pekant Tea Company, which produces a spicy bottled organic black tea that is sweetened with fruit, and infused with chile (pepper). The company’s co-founders, Mike Circosta of Williston Park, J.J. Villani of Nesconset, and Mike Romano of East Moriches, said they have trademarked the tag line “A little sweet, with a little heat” for the product, which has received positive feedback from local retail outlets.

Pekant Tea is already carried at 20 branches of Stop and Shop in Suffolk County, said Mr. Circosta. “The product is so unique that it opens up a lot of doors,” he said. The tea is made at Stony Brook University’s business incubator in Calverton, “but we’re bursting at the seams,” he said. “We need more space and we need more help.”

The prize money would be used to develop a marketing campaign, and to organize taste-testing events, he said. When people sample the tea, he said, they’re won over. “We’re a local Long Island company, but this product has wide appeal, so we’re not going to limit ourselves. We’re going to shoot for the stars.”