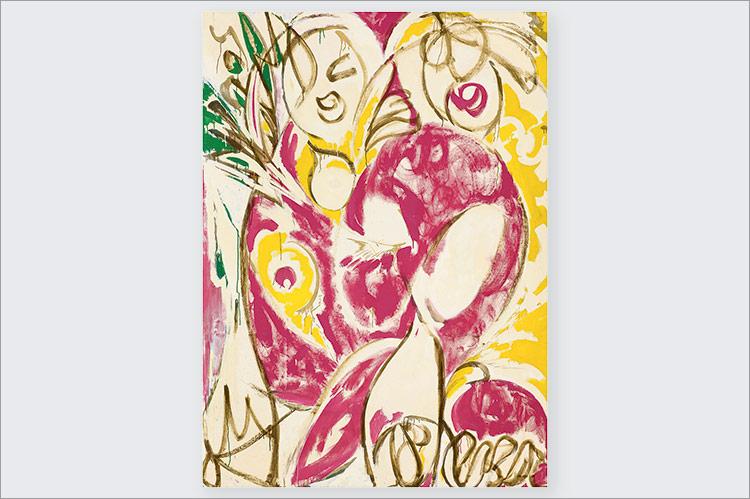 “Sun Woman I” by Lee Krasner will be part of Sotheby’s evening sale of postwar and contemporary art next Thursday.
Sotheby’s
By Jennifer Landes

Although Courtney Sale Ross is now known primarily for the school that bears her name, there was a time when she was a producer and director of documentary films, including one on her neighbor Willem de Kooning.

The 1983 film helped cement an already developing friendship between de Kooning, his wife, Elaine de Kooning, and Ms. Ross and her husband, Steve Ross. The relationship led to the Rosses accompanying the de Koonings to Washington, D.C., in 1982, where Willem was presented with a replacement for the Presidential Medal of Freedom from President Lyndon Baines Johnson that he had lost.

These stories are detailed in an article published by Christie’s auction house in conjunction with next Thursday’s day sale of Ms. Ross’s collection of de Kooning drawings, ranging in estimated value from $120,000 to $1.2 million, part of the fall auctions of postwar and contemporary art taking place next week in New York. A de Kooning canvas measuring about five feet square, painted between 1975 and 1977, will be on offer at Christie’s Wednesday evening sale with a high estimate of $5.5 million.

Sotheby’s will offer its own significant works, including a 1977 approximately six-foot-square work from de Kooning, “Untitled XXII,” valued at $25 million to $35 million in its evening sale next Thursday. During the time of its painting, the artist had lived in Springs full time for more than a decade and had absorbed the effects of the area’s light and landscape, which also reminded him of where he grew up in Holland. Other paintings from this period are in the collections of museums like the Art Institute of Chicago and the Solomon R. Guggenheim Museum. At least one has brought a sale price of more than $66 million.

As is often the case, this year’s auctions have revealed many meaningful connections to the East End through the artists and works on sale from Wednesday to Friday, Nov. 15, first at Christie’s and then at Sotheby’s. The artwork went on exhibit in both houses last week and will remain on view until a few hours before the auction. It could be a first or last chance to see some of these works before they retreat into private hands.

Christie’s sale will be notable for prominent works by artists connected to the East End such as George Condo, Franz Kline, Andy Warhol (“Muhammad Ali” from the sports series and an “Electric Chair”), Ellsworth Kelly, Vija Celmins (a “Night Sky” charcoal on paper with an estimate of $2 million to $3 million), Joan Mitchell (“Plowed Field,” a 9-by-18-foot oil triptych with a high estimate of $18 million), and a Richard Prince “Nurse” painting.

At Sotheby’s, Lee Krasner’s “Sun Woman” comes from a breakthrough and iconic period of her career. Painted in the year after Jackson Pollock, her husband, died in a car crash not far from their home in Springs, it marks her takeover of his studio barn and the large scale then possible in her work after years of painting on easels and tabletops in the spare bedroom she claimed as her studio. “Sun Woman” is from the “Earth Green” series, which signaled a rebirth and new independence from Pollock’s myth and machismo, as Sotheby’s noted. The work has a high estimate of $8 million.

A significant Pollock drawing from 1944 is offered in the same sale, with an estimate of $1.5 million to $2.5 million. Sotheby’s notes that it is executed at the cusp of his invention of the drip-painting technique and “straddles Pollock’s Surrealist-inspired output and the mural-like paint-spattered canvases that would come to define not only his career, but also the entire Abstract Expressionist movement.”

Mark Rothko’s “Blue Over Red,” from 1953, which has a high estimate of $35 million, is a pivotal work from the period when his signature painting style solidified.