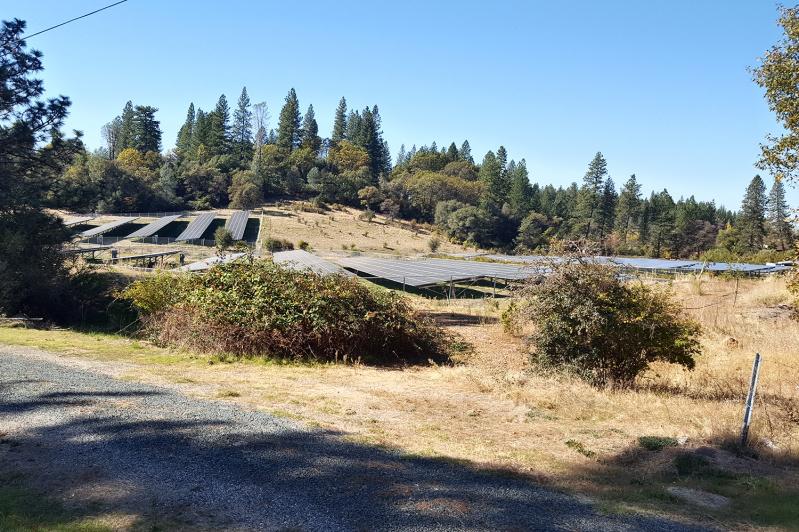 A solar farm in Nevada City, Calif. Like New York, the State of California is pursuing aggressive renewable energy goals, with solar making up a significant portion of the state’s green energy.
Julie Penny
By Larry Penny

While the federal Environmental Protection Agency has softened its rules with respect to new vehicle fuel use under the Trump regime, California has already approved a law that will require new vehicles to use less gasoline and diesel fuel. The Trump administration is now fighting to prevent the state from requiring more stringent fuel-use rules than the E.P.A.’s.

While this energy use battle is going on, one of the largest power companies in California, Pacific Gas and Electric, has begun scheduling local blackouts throughout the state. PG&E is in bankruptcy while it tries to recover financially from the costs accrued from wildfires started by its equipment, including the 2018 Paradise fire that wiped out an entire community. While I was in California over the past two weeks, eight major forest fires raged from Los Angeles County in the south to the very large one north of San Francisco, where several such utility blackouts were put into play.

While California utilities try to reduce forest fire losses by shutting down power to this or that municipality, with accompanying spoilage losses suffered by supermarkets, restaurants, and homeowners, the state is spending millions and millions on suppressing such fires. New York State, the most populous state in the nation after California, doesn’t have the costly forest fires that California suffers because of dry spells, sparking, and Santa Ana winds blowing westerly from desert and mountainous areas.

But New York does host a huge maze of elevated power lines that brush against trees, especially those serving Long Island, New York City, and other major populated areas, and during dry hot years New York does suffer from fires. Consider the 1995 Pine Barrens fire that destroyed so many acres of pitch pines in the Westhampton area, and the 1986 Hither Woods fire in Montauk.

Thomas Edison, the great American inventor of such things as the incandescent lightbulb, wondered before his death in 1931 why people didn’t use energy from the sun to heat homes and power businesses. It took the rest of the 20th century to begin to explore the non-carbon options of solar, wind, and geothermal power, which are not only extremely cost-saving in the long run but which also do not befoul the air we breathe.

Why have we waited so long to switch to non-carbon sources of power? The state under Gov. Andrew M. Cuomo has been betting on wind power, especially the kind that would be provided by a network of offshore wind turbines hundreds of feet high and stretching from Montauk to New York City. But is this the best solution economically and environmentally? I don’t think so. Sunnier California is now favoring solar over wind. The record is clear, wind turbines kill birds, especially those that migrate at night, just as tall buildings do.

Out in the ocean, where numerous species of pelagic birds fish and migrate, such major bird kills will most likely occur, but they will be hard to document because any such doomed bird will fall into the sea and not be heard from again. The noises generated by the installation of wind turbines deep into the sea bed and the constant whirring of the rotors pollute the ocean for whales, dolphins, marine turtles, fish, seabirds, and other marine life. It seems clear that turbines will further impact such species.

Ocean wind power is also much more expensive per kilowatt hour than that produced by solar panels and entails large cables from sea to shore in order to land it.

Solar farms, such as the one supplying power to the electrical grid in Riverhead’s Calverton area, are land-based, while solar panels installed on roofs of homes and other buildings can blend in nicely with the roof forms they are attached to.

PSEG and other utilities across the nation prefer to hire contractors to keep tree parts from coming in contact with the overhead high voltage wires strung on tall poles along major roads and throughout residential neighborhoods that carry the electricity for miles and miles throughout the power company’s distribution area. Such poles don’t last forever and frequently blow down during major storms, causing blackouts and ancillary damages. They are also often treated with poisons to prevent destruction by burrowing insects and woodpeckers.

Fortunately, there is a slow and steady trend to accommodate other means of energy distribution, as in East Hampton Town where the high tension wires extend more than eight miles underground from Amagansett to Montauk.

And solarization of individual houses saves money in the long run. My nephew’s home in Hampton Bays has recently been solarized, and his monthly electrical bills have been reduced three or four times over past billing costs. The East Hampton Town engineer, Tom Talmage, who lives on Long Lane in East Hampton, has had solar power for more than 15 years now, and his monthly electrical bill is almost zero.

It is certainly good to go non-carbon in the short and long runs, and I think the best way to do that is by switching to solar. After all, the sun has been around for more than five billion years and it rises and falls twice daily. Even when it’s cloudy, a properly installed solar roof can produce some energy. There are long periods of still weather when wind power is not possible. That is precisely why California is pushing solar so heavily.

Stuffed With Turkey? Walk It Off
Blood Drive Tuesday in Bridgehampton
Holiday Lights and Charitable Efforts in Montauk
END_OF_DOCUMENT_TOKEN_TO_BE_REPLACED