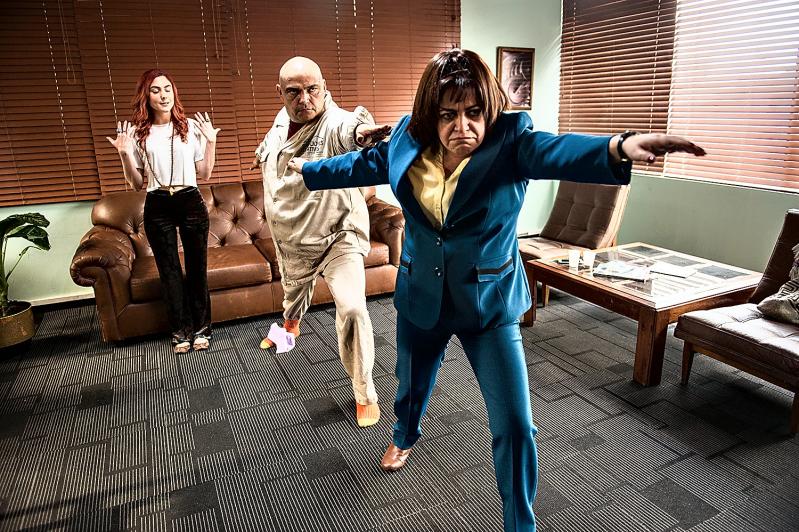 In “Amalia, the Secretary,” Ana Maria Arango, right, plays a bored secretary who falls for her company’s technician, played by Enrique Carriazo, center.
By Mark Segal

“Every once in a while we jump right into the heavy, but this year we thought, let’s bring some comedy,” said Minerva Perez, the executive director of Organizacion Latino-Americana (OLA) of Eastern Long Island, which organizes the Latino Film Festival of the Hamptons. “But of course we’ve got to throw a little edge to it, so these are dark comedies. But they are funny.”

Black comedies from Cuba and Colombia and an animated film from Argentina and France will headline the festival  this weekend with screenings at the Parrish Art Museum, Guild Hall, and Greenport High School.

The festival will kick off tomorrow at the Parrish Art Museum with “Antes que Llegue el Ferry (Before the Ferry Arrives),” an audacious film from Cuba that mixes live action, animation, and documentary to explore the sense of expectation and ambiguity experienced by Cubans when it was announced in 2015 that ferry service would be restored between that country and the United States.

Tomorrow’s program will begin at 5:30 p.m. with a bilingual gallery tour that will include photographs from Tria Giovan’s “Cuba Archive” series, which are on view in the museum’s “Artists Choose Artists” exhibition. A 6 p.m. cocktail reception will precede the 7 p.m. screening, which will be followed by a live-stream discussion with the film’s directors, Juan Caunedo Dominguez, Vladimir Garcia Herrera, and Raul Escobar Delgado. Tickets are $15, $5 for museum members, and advance registration has been recommended.

A cranky secretary at a small company on the verge of crisis is the protagonist of “Amalia la Secretaria (Amalia, the Secretary),” which will be shown at Guild Hall Saturday at 7 p.m. Directed by Andres Burgos, the film stars Ana Maria Arango, a popular Colombian actress, as a woman whose personal and professional control is undone by her attraction to a new technician, which leads her to sabotage office equipment to get his attention.

A reception and a live dance performance from Folklore Colombiano will take place at 6, and a conversation with one of the lead actresses will follow the screening. General admission is $10, with preferred seating available for $20.

The festival will conclude with a free screening of “Pachamama (Mother Earth)” on Sunday at 2 p.m. at Greenport High School. Juan Antin, the writer-director, worked for 14 years on the film, which tells the story of a young boy growing up in the Andes who dreams of becoming a shaman during the time of the Incas and the Spanish explorers.

Ms. Perez has also announced the launch of the OLA Media Lab, which will conduct workshops to develop students’ media literacy while encouraging their creativity and commitment to social change.

Maria Maciak, a filmmaker, educator, and founder of the Ross School’s media studies program, will facilitate a six-to-eight-week program at Riverhead High School working with the English as a new language population. It will culminate with presentations at Bay Street Theater in Sag Harbor in April.