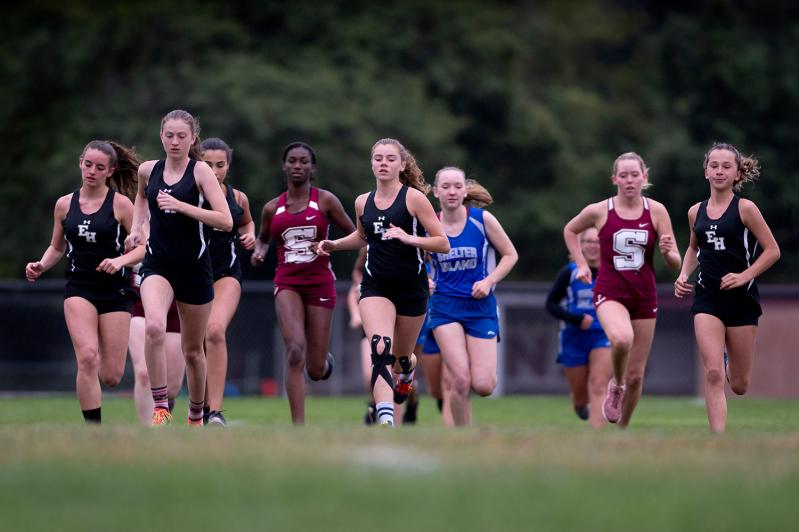 East Hampton High’s girls cross-country team, three of whose members, Ava Engstrom, Ryleigh O’Donnell, and Dylan Cashin, can be seen above, is the first in Diane O’Donnell’s 28-year tenure to earn a berth in the state meet.
Craig Macnaughton
By Jack Graves

The smallest and best girls cross-country team Diane O’Donnell has coached in her 28-year career here topped its Class B rivals Sayville and Bayport-Blue Point at Sunken Meadow State Park Friday, assuring it of a trip upstate — the first ever for East Hampton High School girls cross-country — this weekend.

“My uncle,” Kevin Barry, East Hampton High’s boys cross-country coach, “said we had ‘no chance’ when the season began,” Dylan Cashin said with a smile at the Dock Race’s finish line Sunday.

Barry himself, who was also in the crowd milling about outside George Watson’s bar and restaurant, agreed. “But then, about a month ago, all of a sudden, when they recorded the best five-girl score in Class B at the Suffolk Officials Invitational, the week before Van Cortlandt, you could see they had a shot. . . . I’ve never seen a group so close, so together, all six of them, and that includes the terrific boys teams I’ve had.”

O’Donnell, during a conversation at The Star Monday, said, “You know, they worked so hard, they hoped so hard. We knew it was within their grasp, but, as we kept telling them, it would take a superhuman effort from every one of them [to win Friday’s state qualifier]. And every girl who ran that day felt the same way.”

“It took a lot of work, there were a lot of pep talks,” said Bella Tarbet, who ran side by side at the Dock Race with four of her teammates — Ava Engstrom, Cashin, Emma Hren, and Mimi Fowkes. Only Ryleigh O’Donnell, an eighth grader, like Cashin, was not there.

“Our coach told us to run an 8-minute pace, but we ran a 7-minute one,” added Tarbet, smiling.

“All of them ran season bests,” said O’Donnell. “Emma ran 30 seconds faster than she had in the division meet — she’s made huge strides.”

“She was the fastest fifth person,” said Tarbet, adding, “Ava had a great day.”

“They’re very good to each other and very good for each other,” O’Donnell said, when told of Barry’s comment. “Bella keeps the team together, but Ava sets us up to win. I’ve always admired her. When she says she’s going to do something she does it. We told her, ‘You can’t let Sayville get one, two, three on us.’ And she didn’t.”

In the end, with Engstrom ninth, Cashin 11th, Tarbet 13th, O’Donnell 18th, and Hren 23rd, the Bonackers beat Sayville and Bayport-Blue Point, who tied, by 6 points.

It was, however, an agonizing wait as Barry, whose phone had a scoring app — an apt app, as it turned out — kept his silence at first, thinking that perhaps he might be in error. O’Donnell too, who was trying to get her exhausted runners up off the ground, where they’d collapsed, so that they could get warm — “it was freezing that day” — was in a similarly suspended state.

“Kevin’s app, as it turned out, was spot-on, but he didn’t want to say anything,” said Paul Hamilton, a former county-champion miler who was there cheering the girls on with Sharon McCobb.

“It was the most important race of the year, and they were so cool,” Hamilton continued. “They were perfect. Kevin thought they might have gone out too hard, but when I saw them later, one after another, so tight, I knew. And they were still all together at Cardiac [Hill, a grueling climb] with about a half-mile to go. They rose to it. They said, ‘We can.’ They were pumped. You could tell. . . . Every girl beat the girl she had to beat.”

“And the whole team is coming back next year,” said McCobb.

When the season began, O’Donnell said she was really certain that Engstrom, who finished fifth in this race as a ninth grader and as a sophomore, would return to the state meet, and, possibly, Tarbet. “But as time progressed we realized it would have to be a team effort even for Ava to go. The highest we could see her getting was seventh, and that wouldn’t have made it — we would have to do it as a team. . . . Well, I oughtn’t to say Ava wouldn’t have made it otherwise — you can never discount her.”

East Hampton’s league record was 3-3, not indicative of a county champion. “It was always a roller-coaster ride — they’d race brilliantly and then have a terrible one,” said O’Donnell. “In early October, at Red Creek Park, against Westhampton and Sayville, we ran horribly . . . except for Dylan. Bella had

just returned from South Africa,” where she’d competed in the international lifesaving championships, “Mimi had gotten hurt, and Ryleigh got lost on the course. We spent an hour looking for her, which was scary. We could only score four that day, and you need five. I had to keep Ryleigh out of the division meet because she’d rolled her ankle. . . . So, it hasn’t always been peaches and cream.”

Still, “historically, we’ve always gotten stronger as the season progresses. A lot of teams will come in blazing and then drop, drop, drop, but we’ve always been a team that’s gotten better each race. At Van Cortlandt, which was Oct. 19, you could tell we were beginning to gel.

That’s when we said, okay, we feel like a winning team.”

The chief scorer came over to where she and Barry were peering anxiously at his app, hemmed in by her girls and their parents, so that O’Donnell could be the first to see the final results. East Hampton had, indeed, won.

“I had to look at the results three times as the Miller Place coach was telling me he’d told me so. When I told the girls, it was sheer pandemonium — they and their parents were crying and cheering and laughing. I admire these girls so much. They worked hard, they supported each other, and they never gave up on their dream.”