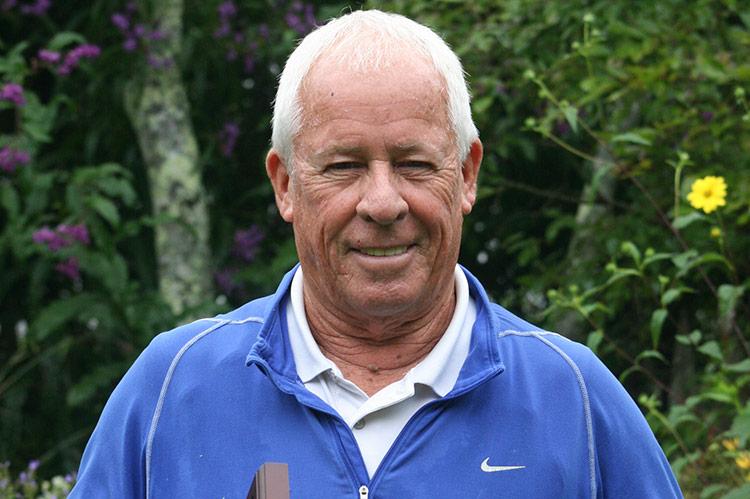 As a result of his third-place finish at the national grass courts tournament in Philadelphia in August, Frank Ackley's national U.S.T.A. ranking rose from 47 to 14.
Jack Graves
By Jack Graves

He’s been ranked as high as fifth twice nationally in U.S.T.A.  age group doubles, the Springs resident said during a conversation at his house Sunday, but never ranked as highly (eighth) in singles.

A month before Pinehurst he “went Spartan,” training seriously with Gary Clermont and Vince Horcasitas at the East Hampton Tennis Club, grooving his strokes so he would be ready.

The men’s 70s draw numbered 128, “the biggest draw they’ve ever had.” Given his performance in three previous U.S.T.A. tourneys in the past year, he was seeded — ninth, he thought — which enabled him to receive a first-round bye.

As for the 7-5, 6-2 and 7-5, 6-1 wins over Touzin and Green, Ackley, when questioned, said, “I like to feel my opponents out in the early going, and once I see what they can and what they can’t do, I come up with a plan. I’m pretty good at figuring out the best formula and going after it. Some guys, for instance, like to drop-shot you, but I’m quick and can get to them, which they hate. Some guys hit some good shots and then spray them all over the place . . . those are some of the things you process. It may take a while, but that’s okay. I can stay out there. A lot of guys my age, though, go for winners, they want to get it over with.”

Even so, matches on successive days do take a toll, he admitted. After a national tournament in Houston earlier this year, he couldn’t walk afterward.

Defeating Maharaj, the fifth seed, 6-3, 6-4, had been “very big,” he said. “He would have been seeded four, but a guy from Canada entered at the last minute, so they moved Vishnu to five.”

In the quarters Ackley played “the best guy in the tournament — he was in the top 50 in the open era, he was in the main draw at Wimbledon and at the U.S. Open and all that. He lives in Florida now, as a lot of these guys do. He’s 6-7, a huge guy, with a really good serve, and he’s always attacking. Some of these guys when they get a little tired they’ll spread the ball all over the place. They’re not tough, but Larry is. Every point he’s attacking, playing hard, keeping the ball deep. If I missed a first serve, he wouldn’t relax — he’d attack. He knows the game. It was fun though. He’s won the worlds a couple of times.”

His showing at Pinehurst, plus what he’d done at the other three nationals, in Houston, Connecticut, and Philadelphia, earned Ackley 1,484 points and, consequently, the number-eight ranking in the country. “If I’d stopped at the round of 16, I’m not sure it would have put me in the top 10. I would have had 130 fewer points if I’d lost in the round of 16. I knew if I beat Vishnu that I’d be in the top 10 — I was positive of that.”

And now? “I don’t know,” he said with a smile. “I don’t think I’ll chase a ranking again like that. This was the year for it, the year that I entered the 70-to-75 age group. I don’t know . . . it wears you out, man. You’ve got to put in a month of practice before, you’re away from home a lot, if you get to the finals you’re playing seven matches in seven days, and when you come home you’re beat up. . . .”

But didn’t he want to be the best who ever was? “I don’t think it’s possible — it’s so much of a grind. I’d have to get a personal trainer . . . I’d be eating chicken breasts for the rest of my life! We’ll see. Houston’s in March. My birthday comes up in mid-February and I’ll be in Florida, where it’s easy to find people to play with. I’ll have a month to ‘go Spartan’ if I want to.”

Meanwhile, he said, he was happy to know he could compete at the age of 70.