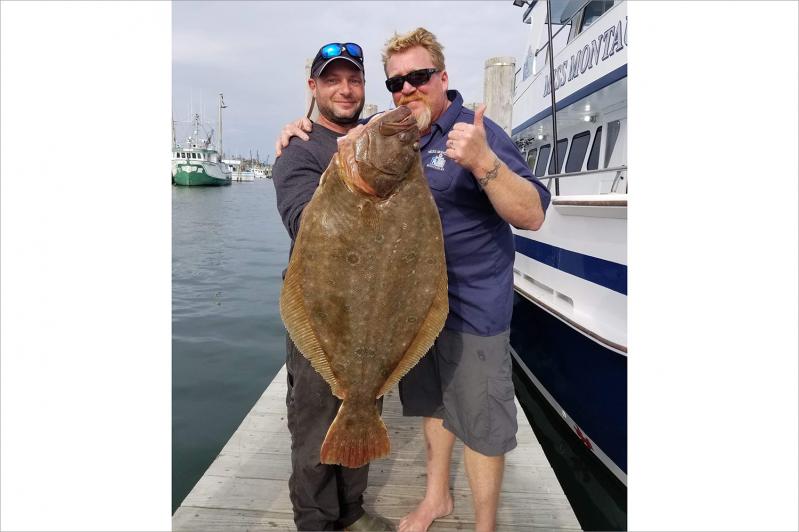 Fluke season came to an end on Monday, but not before Daniel Stanizewski, left, landed a 17.8-pounder on a recent trip with Capt. Jamie Quaresimo on the Miss Montauk II. It was the largest fluke landed in Montauk in 2019.
Miss Montauk II
By Jon M. Diat

Back in 1982, the British rock band the Clash — one of my favorite groups of all time — came out with the song “Should I Stay or Should I Go.” A classic rocker of a song with a steady beat, it is punctuated with some hard-hitting, sarcastic lyrics, backed by some great guitar licks. It’s a catchy tune that topped the music charts and can still be heard on the airwaves.

There has always been speculation about the meaning of the lyrics, as an internal clash (no pun intended) was building amongst the four bandmates. A few years after the song came out, the group finally dissolved and decided to go, and not stay. The Clash had crashed.

While I’m quite certain that the London-born members of the band were not inspired to pen the lyrics to their hit based on past fishing experiences, the song does indeed resonate for many who spend time on the water, including myself. How so?

For me, it happened last Thursday as I had made plans to fish with a friend on my boat. But in listening to the marine weather forecast the evening before, I knew the conditions for the following morning, and in particular the afternoon, would be a bit nautical as they say, as the winds were expected to breeze up to 20 knots by lunchtime. Not the most comfortable of conditions on the bay, but also not an exact replay of the final scene from “The Perfect Storm” either.

As such, the night before my trip, the quandary running through my mind between very intermittent sleep was, should I stay or should I go?

Ultimately, in the wee hours of the morning, I made the decision not to go. But there was a catch.

I’ve lost track over the years how many times I’ve wrestled with this dilemma. Sometimes I’ve made the choice to fish and the conditions were not as bad as expected. On the flip side, I’ve also experienced the complete opposite.

Nothing is worse than a bad day of fishing in bone-jarring weather. On such a trip you also make an inner promise to never do that again. It’s just no fun getting beat up to catch a fish. Memories of such dreadful experiences seem to evaporate over time.

As I get older, I feel myself becoming more and more conservative when it comes to these gut decisions. The fact that I had never fished with this person before also played into my mind and stomach. How sea savvy is this person? Can they weather the weather? Will they be very disappointed if we don’t go? I didn’t have the answers, and that made the decision even harder.

However, an unforeseen situation began to unfold for me during the night. My throat became irritated, my head and body began to ache, and I felt chilled. I had felt it a bit that afternoon, but by 9 p.m., being in bed was my immediate goal. My body gave out.

I sent my intended fishing guest an early morning text of my travails, along with an apology. There was no way I would be well enough to go fishing. It was the first time in recent memory that a physical ailment had derailed a fishing trip. I felt bad, but a part of me actually felt relieved that my condition made the decision for me. Your body knows what’s right.

The trip will be rescheduled; I just hope I’ll be faced with an easier decision next time.

“Lots of nice sized striped bass have moved in along the ocean beaches,” reported Harvey Bennett of the Tackle Shop in Amagansett. “The new moon seemed to bring a nice slug of fish.” Bennett took advantage of the good fishing over the past weekend by landing several fish up to 34 inches from the early morning tides. “Feather jigs have been working like crazy. I also heard that some bigger fish in the 30-pound range were taken at night as well. There have been a few weakfish taken too.”

On the bay side, Bennett said that blowfish remain thick in Three Mile Harbor and that porgy fishing is still great east of Gardiner’s Island. “Also, the false albacore bite remains hot in and around Montauk, with lots of bass and blues in the mix as well for light tackle enthusiasts.”

“Everybody here is fishing to the east,” said Ken Morse at Tight Lines Tackle in Sag Harbor, who also mentioned false albacore, bass, and bluefish. “It’s been a number of years since we’ve seen such blitz-like fishing. It’s like old times.”

As for the local surf scene, Morse confirmed that striped bass have showed up in fine style, with bigger fish up to 40 pounds taken off the new moon. “The fishing is good during the day, especially the morning, but the bigger fish have been taken at night.”

“The local striped bass fishing has been okay, but the fishing at Block Island has been on fire,” said Capt. Hugh Chancey of Chancey Charters in

Montauk. “We’ve been diamond jigging striped bass from shorts all the way up to 40 pounds. Also, in the mix have been a pile of giant bluefish up to 17 pounds.”

While the local bluefin tuna bite has chilled off, for those venturing farther offshore, the fishing remains solid for a variety of pelagics. The Viking Five Star returned from a recent excursion with a fine catch that included nine yellowfins in the 60-to-80-pound range, five albacores, a swordfish, and two bigeye tuna up to a whopping 284 pounds. “It was an awesome trip,” said Capt. Steven Forsberg Jr. “We stayed chunking the entire trip and had a steady pick of fish both day and night. We marked fish consistently.”

While the recreational sector for fluke fishing came to an end on Monday, the commercial daily trip limit for the popular flatfish was increased to 210 pounds from 140 pounds. This trip limit will remain in effect through the end of October, before it goes back down to 70 pounds the following day.