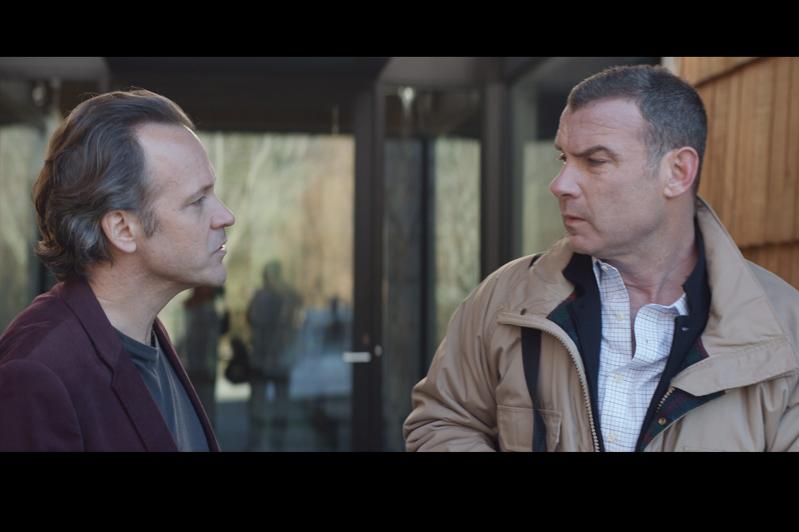 Peter Sarsgaard and Liev Schreiber find their lives entwined, and not for the better, in “Human Capital.”
By Jennifer Landes

There’s a deep moral center at the heart of Marc Meyers’s film “Human Capital.” Unfortunately for its characters, it remains elusive as they each unspool their individual stories, tied to a shared tragedy.

Shot UpIsland in and around Locust Valley, it is one of the Hamptons International Film Festival’s Views From Long Island selections, featuring a stunning Manhasset house designed by the East Hampton firm Bates Masi Architects in an area that is a stand-in for upstate New York.

Liev Schreiber, a Montauk part-timer, plays Drew, a socially awkward and not terribly successful real estate agent. While dropping off his daughter at that grand residence so she can visit her boyfriend, he introduces himself to the boy’s well-to-do parents: a rather chilly Marisa Tomei and her jaded and smug husband, Quint (played by Peter Sarsgaard), who runs a successful new hedge fund.

Drew, who clearly cannot afford the $300,000 buy-in, risks his family’s financial security and his business reputation to invest. Things become complicated soon after.

Just when it is about to catch up to him, there is an abrupt shift of focus to Carrie, Ms. Tomei’s character. She, too, becomes a victim of her circumstance and her own moral failings. The story shifts one final time to address some questions prompted by the behavior of Shannon, Drew’s daughter, played by Maya Hawke.

This is a remake of Paolo Virzi’s 2013 adaptation of Stephen Amidon’s 2004 book. Mr. Meyers said last week that he watched that movie once and glanced at the book, but by that point he was more interested in interpreting Oren Moverman’s screenplay based on the material.

The director said the story expressed its ideas about the American class system in its very structure. “I liked how the structure of the script was in part the meaning of the film, how we’re separated into these class systems where it’s hard for us to understand where someone else might be coming from.”

The separate chapters highlight the separation of the characters by class. “This film is about perspective and point of view and really seeing a world through their eyes and how they experience the intersecting moments that they share in the film.”

A lack of community is also a theme. “Here is a set of characters who rather than come together all scatter to preserve their own separate self-interests.”

It opens with a hit-and-run accident. In the time it takes to return to the scene of the crime, the accident has become the major plot point, as it is slowly revealed that one of the characters is responsible.

Mr. Meyers said shifting the tone and point of view of the stories wasn’t difficult. “You know which world and perspective you’re in by finding a visual language that is connected to that character.”

He said behind each story was a different philosophy and toolbox of things being expressed or explored. “With Liev there was so much you could get off of his face,” so there were a lot of medium close-ups during his arc. “With Marisa, there’s more of a white home environment that is clean.” Her wealth means not only bigger, but better. Yet even though the house adds a degree of serenity, “it can’t solve all the pain in her life, her sadness and loneliness.”

Shannon’s story, he said, was more lyrical, following a teen falling in love for the first time. “There’s a much more handheld, spontaneous quality in the way in which we were with her.”

“It was fun having three different movies that were all part of one.” The characters make decisions that could be their undoing, but he found much truth in that. “Most of us are kind of irrational most of the time. On some level, every character is their own worst enemy, and that’s what drives conflict sometimes, people not doing things in their own best interest.”