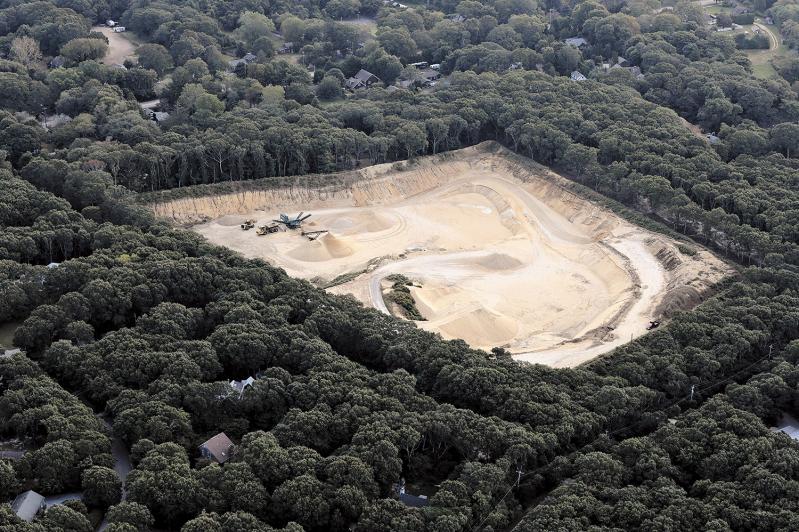 The expansion of the Sand Highway mine on Middle Highway in East Hampton has been opposed by East Hampton Town, about 250 residents, and other organizations.
Doug Kuntz
By Christine Sampson

Once again, for the third time since last October, East Hampton Town has sent a formal letter of protest to the New York State Department of Environmental Conservation opposing expansion of the Sand Highway L.L.C. mine on Middle Highway in East Hampton.

In the latest letter, dated Sept. 27, Supervisor Peter Van Scoyoc reiterated that the mining proposal does not comply with town laws and “clearly poses the potential for numerous significant adverse impacts.” He disputed the validity of last month’s analysis of the project under the State Environmental Quality Review Act, which resulted in a negative declaration, meaning that expanded mining would have no significant impact on the environment.

Sand Highway L.L.C. has applied to the D.E.C. for permission to dig 110 feet below the groundwater level, and for approval of an eventual reclamation plan that would create a 6.5-acre “lake,” to be able to continue mining sand and gravel at the site.

Mr. Van Scoyoc told the agency that the mining company’s proposed groundwater-monitoring wells “merely facilitate . . . discovery [of contaminants] at some point in time. T­here is no plan for any curative action in the event of contamination.” He also maintained that the lake would create “an attractive nuisance” that encourages trespassing.

“We also note that the plans for site restoration severely stretch the concept of native habitat,” Mr. Van Scoyoc continued. “East Hampton’s natural freshwater ponds are generally quite shallow and support diverse communities of native plants, insects, fish, and wildlife. The proposed final size and depth are found nowhere in East Hampton, nor do the plans include any provisions for underwater habitat establishment.”

In an email to The Star, the D.E.C. said it had received 49 written comments during the open comment period, which ended Friday. The agency has also extended, by two weeks, the opportunity for East Hampton Town officials to comment. “Once all comments are reviewed, D.E.C. will make a determination as to the next steps for this proposal.”

The D.E.C. said it is “committed to conducting a thorough environmental review of the proposed mining permit application submitted by Sand Highway L.L.C. to ensure the continued protection of natural resources, including water quality and public health. D.E.C. continues to provide rigorous oversight of the mine operations to ensure it meets the existing permit requirements that are protective of the environment.”

A coalition of about 250 local residents as well as the Group for the East End and the Suffolk County Water Authority previously joined the town in opposing the new mining proposal. Patrick Bistrian Jr., owner of the mine, could not be reached for comment this week.