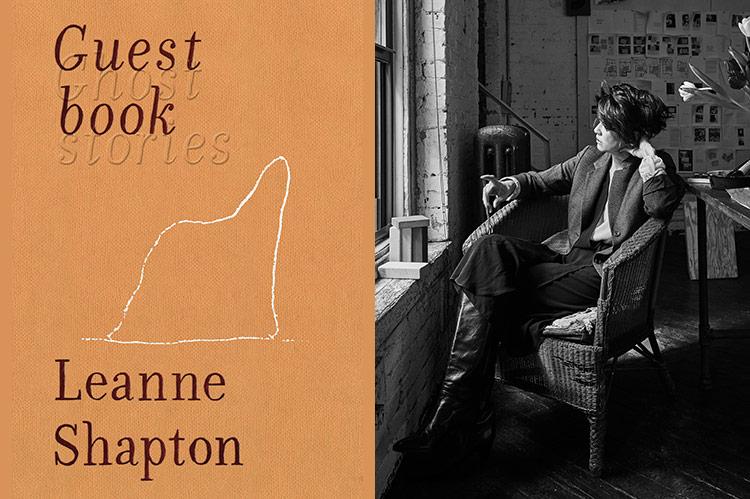 Some books tell stories. Some books collect photographs. Some books feature artwork, or are a work of art themselves. But few books convey a spirit as forcefully and hauntingly as the writer and artist Leanne Shapton’s latest offering, “Guestbook.”

Presenting stories composed by turns exclusively of visual art or photographic images or prose, or an interplay of all of these elements together, Ms. Shapton once again manifests as an artist and innovator who opens new worlds and ways of storytelling that invite and incite the reader to participate in rendering the unseen.

One of Ms. Shapton’s previous books, “Important Artifacts and Personal Property From the Collection of Lenore Doolan and Harold Morris, Including Books, Street Fashion, and Jewelry,” artfully tells the story of a relationship in the form of an auction catalog, items left with such charged significance that they must be disposed of after the relationship has ended. But while “Important Artifacts” floods the reader with detail, “Guestbook” chases shadows, sketches outlines, and urges the reader to “Think about what you don’t get to see” and even “Remember what you don’t get to see.”

The phantasms that inhabit Ms. Shapton’s tome, which has the subtitle “Ghost Stories,” remain beyond the veil, leaving us only hints, traces, mysterious indoor puddles, disturbed objects, and hasty exits.

In the opening story, “S as in Sam, H, A, P as in Peter, T as in Tom, O, N as in Nancy,” the author casts a spell with four letters of her own name, each character brought to life in a few short sentences captioning a photograph. The sharp vision and sparse prose stir the soft-focus images to life, animating them like firelight.

A maestro of mixed media, Ms. Shapton here offers a series of short stories so varied in approach, tone, style, and voice that it almost feels she is the medium through which these vivid spirits have chosen to communicate. A handful of the photographs are personal, others having been collected from Etsy, online catalogs, or Christmas wrap­ping paper. Some stories feature Ms. Shapton’s otherworldly watercolors in which the serene viewer may glimpse a visitant specter.

“Lago” simply depicts various perspectives of a bedroom, a bathroom, a sitting room, the view of a lake and the mountain beyond with only simple captions, yet it leaves the reader with an unsettling impression of what the inhabitant might feel. Are the rooms haunted by former inhabitants? Or are the inhabitants, and the reader by extension, simply the hosts by which the rooms find their emotional expression?

It’s Ms. Shapton’s ability to permeate the border between word and image that results in a penetrating perambulation between the world we live in and what lies beyond. Apparitions arrive in lightning-like epiphanic flashes, then leave the reader in darkness, waiting for the next one to strike. Other stories pass like drifting clouds that soften the moonlight into a melancholy idyll.

“Eidolon” features a series of watercolors that abstract a scene from “Death in Venice” along with description from the screenplay. The outline of a figure points off toward an unseen hor­izon. The accompanying story is a catalog of memories: a sleeping child in the back seat of a car, a palimpsest of moments surrounding a former apartment featured in the background of the record sleeve for “The Freewheelin’ Bob Dylan,” kissing couples, jealous couples, estranged and broken couples, or solitary people propping up cameras to take selfies in front of the famed but changing cityscape. The opera “La Boheme” recalls the memory of a departed friend. Youth, old age, love, and death all momentary yet eternal.

It is the pointed restraint of the prose that makes “Guestbook” both impenetrable and inhabitable. I could read these stories again and again and leave each time with a new feeling, a different impression.

“New Jersey Transit” tells, in the first person, the feeling of a woman in transition, her ride canceled, her plans delayed, catching sight of her child’s father as she hides behind a tree. A once-shared life fading away, and the sense of fading from it.

Punctuated with poetry, beauty, and humor, this invocation of visitants — some bringing comfort, others anguished, yearning to be seen, felt, held, heard, and understood — reveals to us the restless spirit that animates us all. Are we that spirit itself, or merely the host that gives temporary lodging to the guest?

Leanne Shapton was born in Canada and now lives in New York City and Greenport.

Matthew Davis is an Emmy-nominated television editor from Sag Harbor.