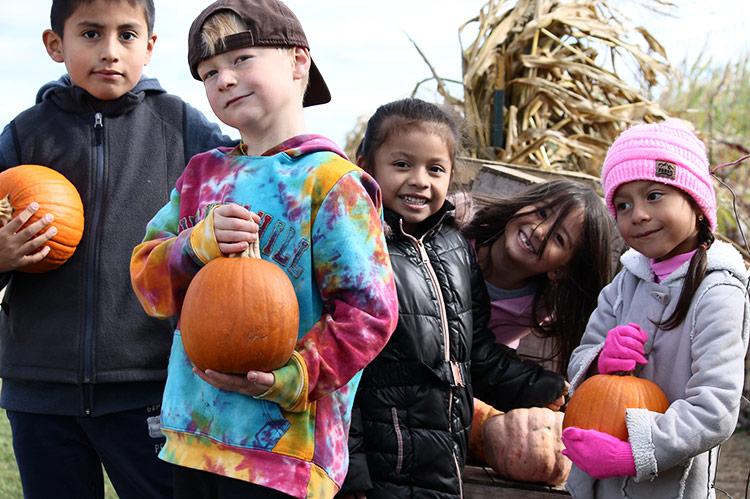 Children from the Wainscott School, above, joined their peers from the Sagaponack School at Hank’s Pumpkintown in Water Mill on Friday. The trip kicked off the coming year of collaborative activities between the two tiny schools.
Christine Sampson
By Christine Sampson

Students at the Sagaponack and Wainscott Schools learned last week that when two small schoolhouses go on one field trip together, it adds up to tons of fun.

A joint visit to Hank’s Pumpkintown in Water Mill on Friday kicked off what will be another year in a long tradition of collaboration between the South Fork’s littlest two schools. Class visits, field trips, beach cleanups, video chats, pen-pal pairs — they’re all ways in which they work together to expand the kids’ horizons.

When the entire student population can fit into one or two classrooms, the teachers have said, it just makes sense to team up — especially when everyone is practically one another’s neighbor.

“Our students are very lucky to be in a one-room schoolhouse,” said Kelly Yusko, one of Wainscott’s two full-time teachers. “But now they get to meet the kids around the corner. It’s a great experience for the kids.”

Since both schools house kindergarten through third grade, all children in fourth grade and up leave Sagaponack and Wainscott to go to other schools — specifically, Sag Harbor Elementary and John M. Marshall Elementary. (Saga­ponack children may soon have the option of the Bridgehampton School, too, as the administration explores a new tuition contract there.) And meeting peers from nearby communities boosts the chance that there will be familiar faces when it’s time to attend a new school.

Sometimes, though, they have an obstacle to overcome first.

“Typically the young ones will be a little shy, the older ones less so,” said Terry Scammell, who teaches at Sagaponack. “They tend to loosen up when there’s a specific activity we’re doing.”

On Friday, it was pumpkin picking, playtime, and lunch together at the bustling pumpkin patch.

“The idea is to get them to meet new people,” Ms. Yusko said. “Diversity is an important thing that helps both schools out.”

The hayrides had to be separate, though. That’s because Wainscott brought along all of its 30 students — a record number for the school in recent years — and the wagon couldn’t fit more than that. Sagaponack has 16 children this year, though three weren’t in attendance on Friday.

This time last year, for the annual pumpkin patch field trip, Sagaponack and Wainscott even joined the New Suffolk School at Harbes Farm on the North Fork. They’ve Skyped and paired up with pen pals from New Suffolk in the past, too.

New Suffolk has kids in prekindergarten through sixth grade in three classrooms. In the spring of 2018, for financial reasons the district’s school board scheduled a referendum on closing the school and sending its students to another nearby district, but it was ultimately canceled, and classes remain in session there, with enrollment similar to Sagaponack’s.

Even the teachers and staff members join up, attending professional development sessions and conferences together. “We can kind of pick each other’s brains, so it’s definitely beneficial to the teachers as well as the kids,” Mr. Scammell said.

Wainscott and Sagaponack may also agree to share a guidance counselor this year. “We’re all so small that none of us have our own guidance counselor,” Mr. Scammell said. “We can use the same one to align and collaborate.