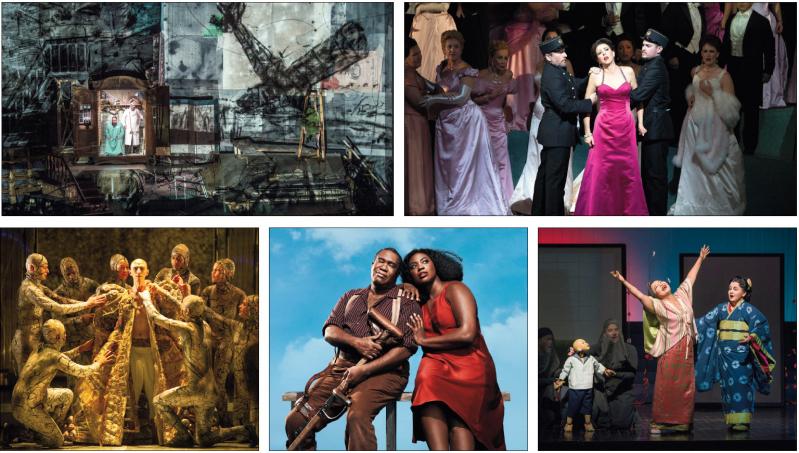 A new season of The Met: Live in HD, with performances of Puccini’s “Madama Butterfly” and “Tosca,” Philip Glass’s “Akhnaten,” Wagner’s “The Flying Dutchman,” and Handel’s “Agrippina,” among others, kicked off Saturday at Guild Hall with Puccini’s opera “Turandot.”

For those unfamiliar with the series, The Met: Live offers live transmissions of performances from the Metropolitan Opera. The broadcasts arrive in high definition via satellite to select venues around the world. While there’s no doubt that the series has been a great revenue source for the Metropolitan, the quality of The Met: Live experience can be astonishingly good. The operas are filmed close to the stage, allowing viewers to witness intimate shots of costume details, set design, and performers’ facial expressions that are all but lost to a live viewing audience.

There are also matters of convenience and expense. “I’m not going to New York!” exclaimed Sandra Thorn of East Hampton, who has been going to The Met: Live series at Guild Hall for “at least 10 years.” Ms. Thorn, previously a resident of Manhattan, attended the Metropolitan Opera for 25 years, but now prefers the series at Guild Hall. She has already purchased tickets for all 10 of this year’s scheduled performances, which range from $16 to $23.

She cited the “excellent quality” of the broadcasts, remembering a time when she would pay up to $350 for an orchestra seat at the Metropolitan. Factor in

transportation to Manhattan, and the Guild Hall series, she said, represents a great value.

Another East Hamptoner who’s a fan of the series is Michael La Rocca, who has been catching performances for the past three years and attended all but one of last year’s — and only then because he was out of town. Previously, he had a subscription to the Metropolitan Opera for 16 years, somehow securing a ticket in the coveted row J of the orchestra.

But he has since let the subscription lapse, partially because of the convenience of the Guild Hall screenings. “There’s nothing like seeing opera live,” he said, praising the “electrical charge you get from the audience” at a Met performance. Nevertheless, he is a devotee of The Met: Live broadcasts, which he enjoys especially for the “extras” they come with, including behind-the-scenes interviews with the performers, set changes, and rehearsal footage.

Guild Hall also features pre-broadcast talks that function as introductions to the featured opera. On Saturday, for example, Victoria Bond, a composer and pre-concert lecturer for the New York Philharmonic, will speak live at Guild Hall to introduce “Manon” by the French composer Massenet.

Ms. Bond, who calls her series “Operatif,” will give a 45-minute lecture. Asked if she preferred The Met: Live series to attending the Metropolitan Opera, she replied that they are “very different experiences.” She, too, mentioned the “visually

stunning” camerawork of transmissions, but said there’s “no replacing the acoustics of the Metropolitan.”

What does The Met: Live series mean, ultimately, for the future of opera? Mr. La Rocca called it a “mixed blessing,” conceding that he has not been back to the Metropolitan Opera house for three years.

Ms. Bond, on the other hand, said the series has revitalized interest in opera, both generally and in regard to the Metropolitan itself, making attending the Met a pilgrimage for fans around the globe.

The hard numbers are more ambiguous. The New York Times reported that in 2015-16, for instance, the Metropolitan took in 66 percent of its total capacity, though that number rose to 75 percent the following year.

As for recommendations for the coming season, Mr. La Rocca touted Verdi’s “Tosca” (April 11), while Ms. Thorn cited Gershwin’s “Porgy and Bess” (Feb. 1) and also the more experimental “Akhnaten” by Philip Glass (Nov. 23). I would add “The Flying Dutchman” by the controversial Wagner (March 14).

This weekend’s performance of The Met: Live in HD is “Manon,” produced by Laurent Pelly and conducted by Maurizio Benini. Massenet’s tale of passion and excess and their consequences stars the soprano Lisette Oropesa in the title role of a young woman torn between true love and a passion for the finer things in life, and the tenor Michael Fabiano as her admirer, the Chevalier des Grieux.

Ms. Bond’s discussion of the piece before the screening begins at noon.

Tickets to the talk are $30, free for opera donors.

The screening, set for 1 p.m., is $23, $21 for members, and $16 for students. A ticket to the screening and a private three-course dinner afterward hosted by The Star at the Maidstone Hotel can be had for $131.