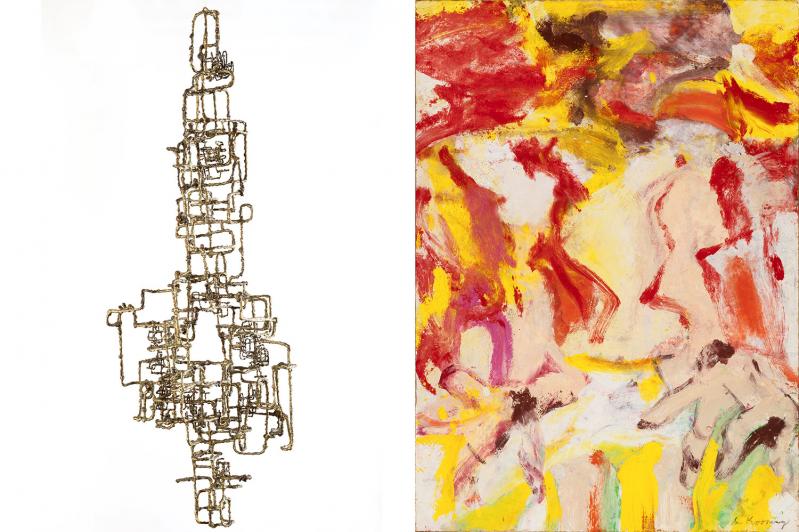 Guild Hall’s two fall exhibitions testify to the museum’s longstanding commitment to collecting and exhibiting the work of the artists of the East End. “Abstract Expressionism Revisited: Selections From the Permanent Collection” celebrates the artists of that movement who made the region their home, and “Joyce Kubat: My People,” features the winner of the 79th Artist Members Exhibition. Both shows will open on Saturday and continue through Dec. 30.

“Abstract Expressionism Revisited” has been organized by Joan Marter, editor-in-chief of the Woman’s Art Journal, distinguished professor emerita, Rutgers University, and a longtime East Hampton resident. Her many exhibitions include “Women of Abstract Expressionism,” a traveling show she co-organized at the Denver Art Museum in 2016.

“When I first suggested a show of Abstract Expressionism to Guild Hall, I didn’t necessarily think I was going to have the majority of the work from their holdings,” said Ms. Marter. “But when I saw the online inventory that Jess Frost put together, and when I had access to the work in storage, I had a much better idea of what they have. It was surprising.”

“Guild Hall has some wonderful things, among them some very nice works by both Willem and Elaine de Kooning. There’s only one Perle Fine in the show, but it’s a very big one. They have some interesting sculpture. All in all, I think people will be surprised to see all of this work that’s in the collection.”

Several pieces have been borrowed for the exhibition. Audrey Flack, a longtime East Hampton resident, is well represented in the museum’s holdings, but mostly by her photorealist work from the 1970s. Ms. Marter borrowed a large abstract painting by Ms. Flack from 1951 from the Hollis Taggert Gallery in New York City.

Betty Parsons was not only an East End artist herself, but was also important to the careers of many of the era’s male and female artists whom she exhibited at her eponymous gallery in Manhattan. Two of her large paintings from the 1950s have been borrowed from New York’s Alexander Gray Associates.

In her essay for the show’s catalogue, Ms. Marter places the rise of Abstract Expressionism in an historical context. “Nuclear proliferation and the Cold War brought tensions to this country and its allies. Out of these struggles came an art that extolled improvisation and abstraction that at times seemed a response to uncertainty, even chaos. The use of a full range of materials and new methods of production stimulated the desire for experimentation.”

The European artists who came to the Hamptons during the early 1940s also had an influence on the movement, especially the Surrealists, whose reliance on the unconscious and free association, and disinterest in preliminary studies or sketches, appealed to young American artists.

Ms. Kubat, who lives and works in Huntington, was awarded top honors at the 2017 members show by Ruba Katrib, who is now a curator at MoMA PS1. Since 2002, her work has focused on psychological figurative works that “convey an emotionally raw narrative of human anatomy,” according to a release. Her use of pastels applied to damp paper creates a liquid soft skin with deep pigments. She also works with fluid pink inks that have the transparency of flesh.