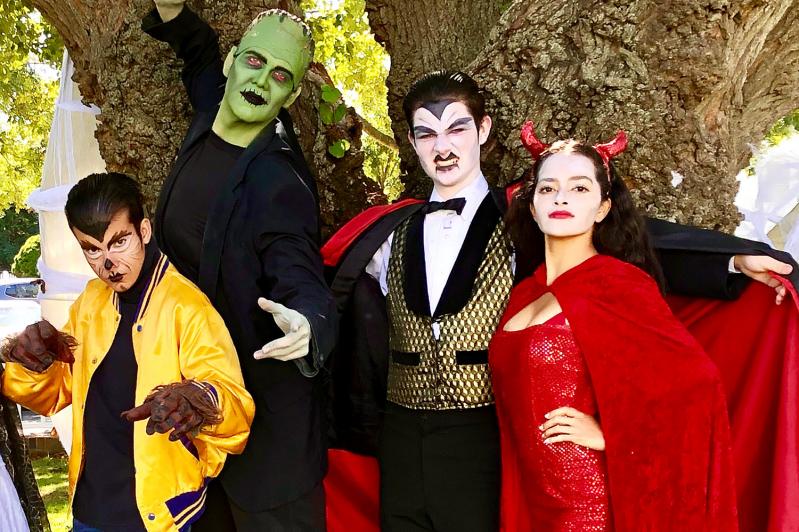 The costumed cast of “Frankenstein Follies” at Bay Street Theater in Sag Harbor will begin a run of four performances tomorrow.
Courtesy of Stages
By Christine Sampson

What started as Helene Leonard’s tribute to her late father, and her family’s legacy of love of the arts, has grown into a tradition on the East End.

Jerry Leonard wrote the original “Frank­enstein Follies,” a show with a Halloween theme, decades ago as a production for his theater company in Ohio, where Ms. Leonard’s family lived before she moved to New York in 1991. Mr. Leonard, who wrote both plays and music, died in 1980 at the age of 52.

“When we moved, I said I would like to start a program similar to his where we could train young actors to be prepared for professional careers or to let them grow in their confidence and to express themselves,” said Ms. Leonard, the founder of the youth theater company Stages and the director and choreographer of the show. “I wanted to show kids that there is an outlet for their talent in a professionally oriented space, which is what my dad always wanted to do.”

“Frankenstein Follies” is now in its 25th year at Bay Street Theater in Sag Harbor. The curtain rises tomorrow for four shows, including a special Saturday night performance in which alumni of Stages will appear. There will also be a party that night following the show, which is a benefit for the Stages scholarship program.

“Follies” is a musical revue that loosely follows the monster Frankenstein as he searches for a bride. It’s more silly than scary.

“It is all of your favorite monsters — Frankenstein, Wolfman, the Mummy, Dracula — singing ’50s, ’60s, and ’70s rock ’n’ roll and Broadway show tunes,” Ms. Leonard said. “The Wolfman sings ‘Hair.’ It’s hilarious. It’s good fun. It has evolved into this incredible piece that everyone enjoys.”

A cast of 17 young people, from ages 8 to 18, will perform tomorrow night at 7:30, Saturday at 2:30 and 8 p.m., and Sunday at 2:30 p.m. Tickets are $15 tomorrow, Sunday, and for the Saturday matinee, and $35 for adults and $25 for children for the Saturday night show, which includes admission to the party. Tickets are available at the Bay Street box office.

Stages produces other plays and musicals throughout its eight-month program each year. For Ms. Leonard, the “Follies” production — and the experience of running Stages with her husband, Gene Stilwell, who is the organization’s president — is especially gratifying.

“The payback for me is seeing kids growing, being proud of who they are, enjoying it, and expressing themselves in a creative way,” Ms. Leonard said.

“They explore their talent and sometimes surprise themselves that they can actually accomplish what they’ve accomplished. We’ve raised the bar at Stages.”