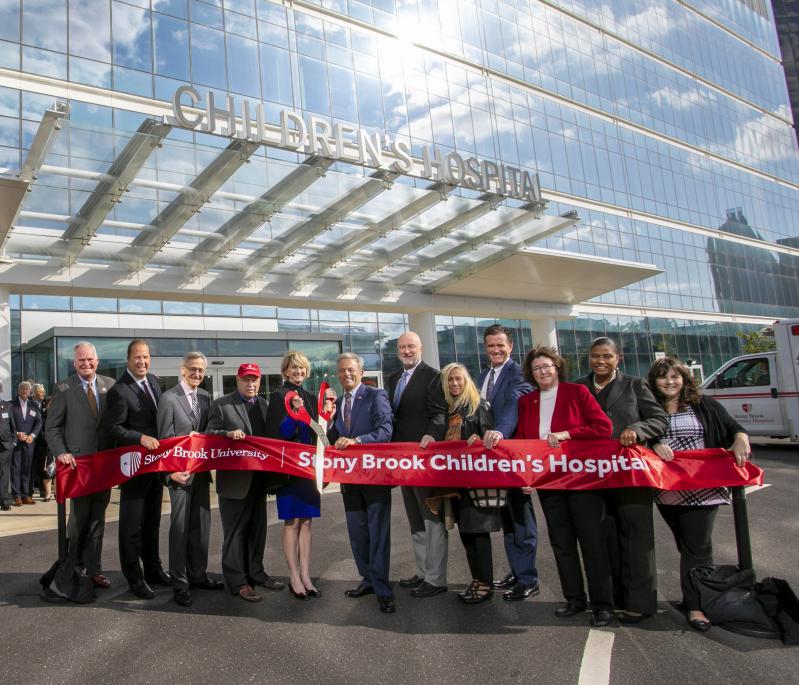 The new four-story addition on the Stony Brook campus is the first and only children's hospital in Suffolk County. It is slated to open mid-November, but the community is invited to check it out during an open house on Nov. 2 from 10. a.m. to 2 p.m.

When it opens, it will be the only children’s hospital on Long Island with all single-patient rooms, "which will allow us to combine the best practices in modern pediatric medicine with a child-first, family-first philosophy," said Dr. Margaret M. McGovern, a professor of pediatrics and the Physician-in-Chief at Stony Brook Children's Hospital.

Each room in the new hospital has patient, family, and health care provider areas. The 48 state-of-the-art hospital beds in the addition have the ability to "capture and download patient information directly into the patients’ charts," and each room as a proprietary security system, with interactive televisions, in-room refrigerators and kid-focused menus, according to a press release.

The hospital offers separate child and teen playrooms, along with common areas like an outdoor garden, and a classroom with Wi-Fi that will allow patients, who are also students, to keep up with their studies.

A wall-sized video board allows for a live feed from the Long Island Aquarium, in keeping with the facility's nautical theme (there is also a lighthouse for children to marvel at).

The children's hospital building project was part of a $450 million expansion, which includes a cancer center, and was made possible through a $35 million New York State University of New York 2020 Challenge Grant,  $50 million in State Senate funding for the hospital and the Medical and Research Translation building, which will be known as MART, and through $50 million in support from a historic $150 million gift from Jim and Marilyn Simons.

“Through significant New York State investment and private donations, SUNY is well positioned to serve the healthcare needs of the state by educating future generations of medical professionals and providing direct care at our excellent hospitals,” said the SUNY chancellor, Kristina M. Johnson.“That couldn’t be more true at Stony Brook University today, as we celebrate the new Children’s hospital; the direct result of strategic collaborations, state funding, and generous support from many individual, corporate and foundation donors.”

Stony Brook Children's Hospital was formally established in 2010 and quickly became the leading children’s hospital on Long Island, with more than 180 pediatric specialists in more than 30 specialties.

Delaney Unger, an osteosarcoma survivor who received a unique amputation called rotationplasty in the spring of 2017 at Stony Brook Children’s, was at the ribbon-cutting and credited those who saved her life. “It became my second home. . . . During my time there, the doctors, nurses and child life [specialists] became family to me. They were there for me with whatever I needed to make me as comfortable as I could be. They were always there with a smile to make me feel better.”

“I am pleased to continue my support of the Children’s Hospital,” said Senator Kenneth P. LaValle. “It is critically important that families going through such an emotional time will receive cutting-edge health care close to their homes and their support systems. The facility is well on its way to becoming a preeminent children’s medical care provider in the region.”