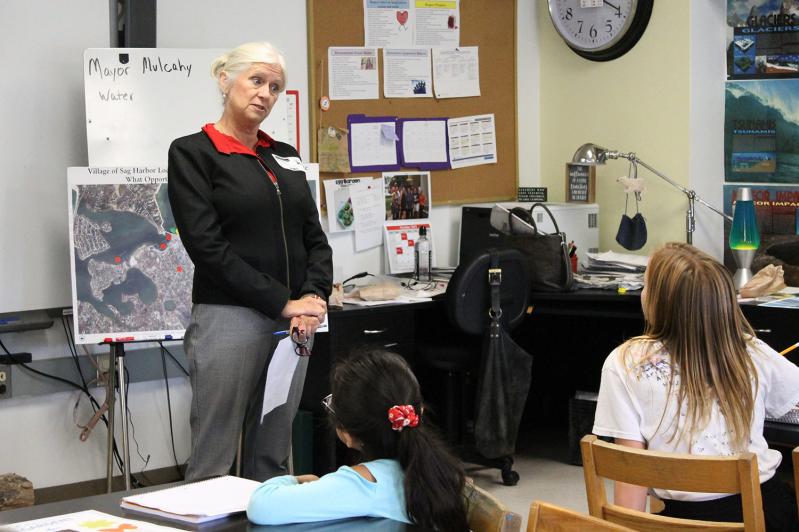 It’s a toss-up who got more out of Kathleen Mulcahy’s visit to the Sag Harbor Elementary School fifth-grade science classes last week — the kids, or the Sag Harbor mayor herself. “The best part about being mayor is learning something new every day,” she said. “I feel like I’m in fifth grade again.”

Ms. Mulcahy, who was elected in June to her first term as mayor, stopped by the school last Thursday to talk to students about environmental issues, water quality in particular. In her lesson, she covered filtration sponges, rain gardens, permeable pavement, the impact of swimming pools, and reducing pollution and single-use plastics. She also introduced her young audience to Sag Harbor’s local waterfront revitalization plan, noting that it was last modified in 2006, about three years before they were born. The plan is now in the process of being updated.

“Lots of things have changed,” Ms. Mulcahy told the students. “Hydration stations,” to fill reusable water bottles, have been installed near the waterfront, she said, and industrial-style sponges will be installed in the drainage pipes at Havens Beach to catch pollutants before they trickle into the bay. She also explained what rain gardens are and how they too will be used to filter pollutants from the water in various parts of the village. New fencing around the perimeter of Long Wharf, which is currently being renovated, will help stop litter before it blows into the waters there, Ms. Mulcahy said. And Bay Street, she said, will soon see paved parking areas replaced by bricks, which will allow water to be absorbed by the ground and alleviate runoff into the road.

One thing that seemed to surprise the science students the most was Ms. Mul­cahy’s statement that swimming pools can actually harm the environment by displacing groundwater and rainwater.

And, the mayor said, “We have a big garbage issue downtown. We want our historic village to stay really pretty, quaint, and sweet, but how do we make an attractive-looking garbage can?” When she asked the students for their own ideas about how to beautify Sag Harbor — and keep it that way   — hand after hand went up.

Maxwell Vogel suggested giving people an incentive to dispose of their trash properly. “You put garbage in the can and it gives you 25 cents,” he offered. He also suggested putting up cameras in the village to catch people littering so they could be fined — a solution that gets a bit complicated, his teacher, Kryn Olson, said, because it would require someone to monitor the cameras and hand out tickets to litterers.

After Ms. Olson noted that cigarette butts are one of the most common pollutants found in the village, Oscar Tanner suggested that students make educational posters to tell smokers not to throw their butts on the ground.

Other classmates suggested putting ashtrays around the village and adding more garbage cans at Mashashimuet Park. One child suggested collecting rainwater in “big bottles” and purifying it for other uses. Sonria Zappola said companies should make drink bottles, such as Snapple, out of glass instead of plastic.

“You can be inventors. You can be idea machines for Sag Harbor,” urged Ms. Olson. She was very proud of her students, she said with a smile.

Ms. Mulcahy invited the children to visit her at her office or even present their ideas to the village board directly. “Never stop learning,” she told the class.