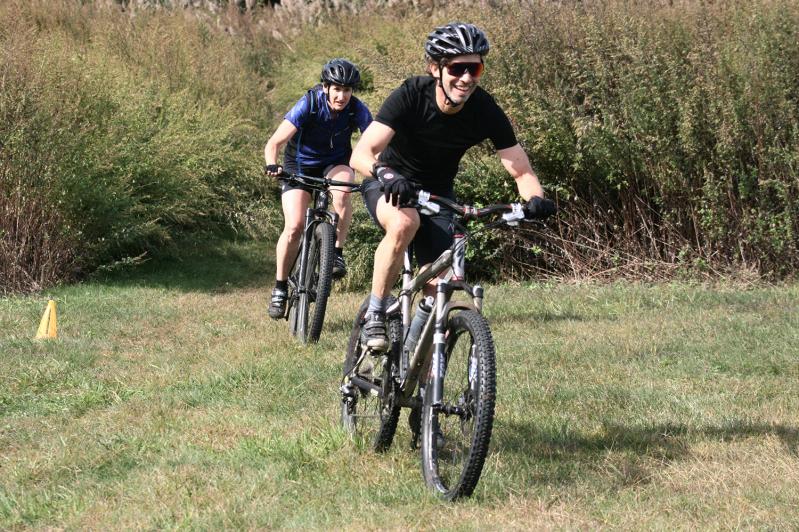 Maria Smit, the women’s winner, who was to finish fourth, and Evan Roth, who was to be the race’s runner-up, descended into Rod’s Valley in tandem at the end of the Serpent’s Back 13-mile mountain bike leg, which was bracketed by 2.4-mile trail runs.
Jack Graves
By Jack Graves

That wasn’t entirely true, for Mike Bahel, Body Tech’s owner, who has been putting on the event for 16 years now, was one of the 15 or so entrants and is always a contender.

By the time the above four had come in, there were three contestants who had yet to come in on the double-loop 13-mile mountain bike leg.

Smit’s home Stillwell Woods trail in Syosset was more curried than the up-and-down single track one in Hither Hills, the women’s winner said. “If I had thought this would be an easy race I wouldn’t have come out,” she added. “It’s beautiful out here — so different. The trails are a little more . . . raw, with a lot of sticks and rocks, more natural than where I live.”

Asked if she had fallen, Smit said no, “though mountain bikers do fall, for sure.”

Amato, who rides road bikes for the Rotations team in Southampton, was third in off the opening 2.4-mile run, but overtook the leader, Roth, in the first mile of the bike.

“I come out for this once in a while,” Amato said when asked if this were his first time at Ed Ecker County Park. “Mike does a fantastic job. He’s an example of someone who gives back to his community. We need more people like Mike. . . . Today was picture perfect.”

As for his cross-country team at Pierson High in Sag Harbor, the winner said, “We’re young, but I took 10 boys to run the 2.5-mile course at Van Cortlandt recently, and five of them medaled,” including his number-one, Ben Mac, in 13:42.

The Pierson boys, he said, had been “moved up to Class C, with teams like Babylon, Center Moriches, and Mattituck,” so it would be hard to win a county championship. He added that while the girls cross-country numbers were slim, Penelope Greene, who competes for East Hampton in the winter and spring, was “doing great — she’s dynamite.”

That Ben Mac and Greene were doing so well this fall was owing to the fact that “they worked so hard over the summer,” he said.

He has 21 on his team, Amato said — about the same number that Kevin Barry, East Hampton’s coach, has.

When this writer said there were 68 on his grandson’s junior high team in northwestern Ohio, Amato said, “Cross-country’s strong upstate too. Katelyn Tuohy of North Rockland is a two-time national champion.”

Amato said he saw a resurgence in track and cross-country’s popularity in general, and he welcomes it inasmuch as “running keeps you from getting old. . . . There’s an indoor track being built in Brentwood, and there’s one on Staten Island too.”

Speaking of cross-country, Barry reported in an email that Evan Masi had won the Suffolk Officials’ [5K] invitational at Sunken Meadow Saturday in 17:262, “his fastest time on that challenging course by 32 seconds.” East Hampton’s boys, he added, finished eighth among 28 schools. Moreover, Isaiah Robins was third and Cooper Ceva 11th among 90 competitors in the invitational’s 1.5-mile freshman race.

Back to the duathlon, Roth, a first-timer at Serpent’s Back, said he’d brought his brother with him, “but he had no idea! The first two miles of the bike are so technical that you find yourself thinking if it’s this way for the whole race, whoa!”

The variety of the course was what had struck him, said Roth, it’s “rugged beauty,” and, he added, “the fact that it’s so well organized.”

“It was one heck of a ride,” said Jonathan McKibbin of Patchogue, the fifth-place finisher, bending over to catch his breath.